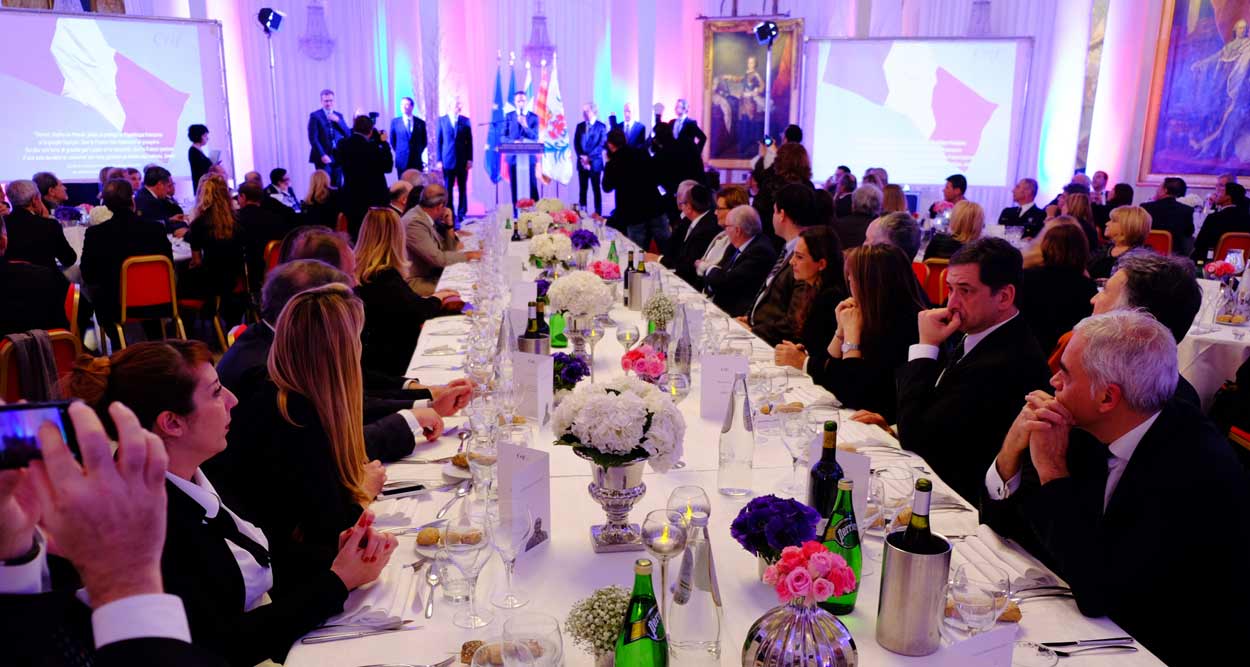 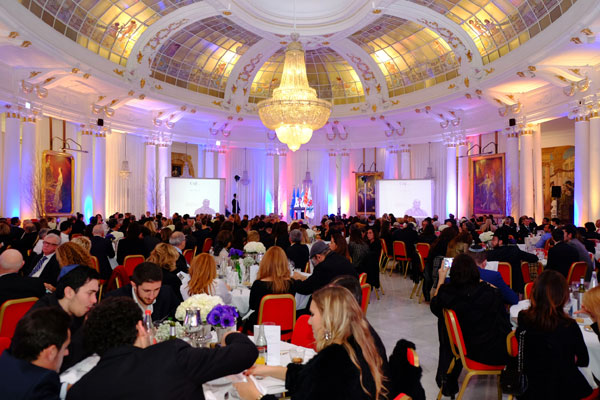 The 2015 CRIF South East Dinner was held at the Hotel Negresco in Nice, offering a moment of republican brotherhood essential to defend the values of the Jewish Community.

The CRIF Dinner at Hotel Negresco in Nice on December 16, 2015 was attended by 300 guests around Christian Estrosi, MP and Mayor of Nice, recently elected President of the PACA region, accompanied by his deputy Martine Ouaknine, Jérôme Culioli, President of CRIF South East and Roger Cukierman, President of CRIF, in the presence of Francis Kalifat, Vice President, Treasurer, François Guggenheim, President of Regions, Adolf Colrat, Alpes Maritimes Prefect and many regional politicians and representatives of law enforcement and the different religions and communities.
Jérôme Culioli and Roger Cukierman discussed the situation of the Jews in France and the tragic events of 2015, while paying a tribute to the forces of “Operation Sentinelle” and dedicating the evening to the late Charles Gottlieb, resistant and deported, “memory passer” of the Voyages of Memory, whose untiring efforts in the service of remembrance has also been welcomed by several personalities. 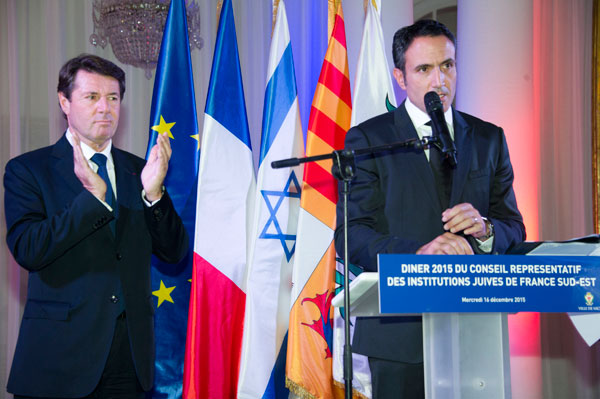 The CRIF works for social cohesion

In his introductory speech, Jérôme Culioli referred to the horrific attacks in Paris caused by Islamist barbarism and recalled that the CRIF and all the community leaders work to maintain social cohesion alongside political authorities, but also alongside representatives of law enforcement authorities.
“The Republic must react,” he said, “at the institutional level but also, and this is also important, at the individual level. This republican firmness makes our strength and that we must always preserve because it allows us to continue to defend, together, loudly and clearly, our shared values which are those of the society in which the French, of all faiths, legitimately wish to live.”
“The CRIF and all the community leaders are working in this direction together with the political authorities, but also together with representatives of law enforcement for a strong republic, a society true to the image of what is France, refusing communalism, racism, anti-Semitism. It is therefore our common responsibility to see to that, to learn from the past, whether near or far, to continue, to quote Charles Gottlieb, to “believe in life and never give up!” 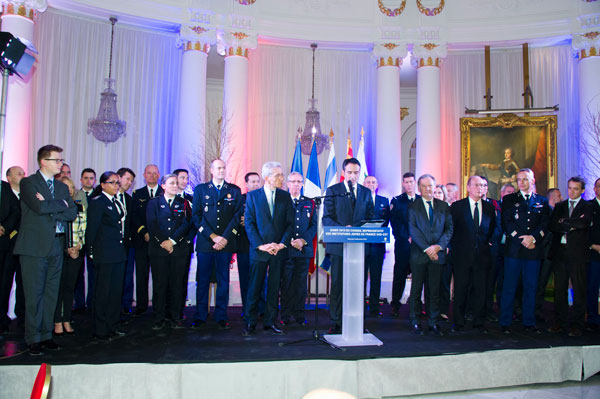 In a national and international context under threat, for several years now, of Daesh and jihadism, the military, the Gendarmes, national and municipal police forces, tirelessly ensure the security of citizens – regardless of their confession – and the sites and members of the Jewish community, especially since the attacks of January 7, 8 and 9 2015 and those of November 13.
To honor their hard work, their solicitation at all times and determination, the 2015 CRIF dinner was dedicated to law enforcement and Jérôme Culioli invited each member to join on the stage Christian Estrosi, the Prefect and elected officials.
A minute of silence was then observed in memory of the 130 victims of jihadist barbarism in Paris before the assembly sang La Marseillaise. 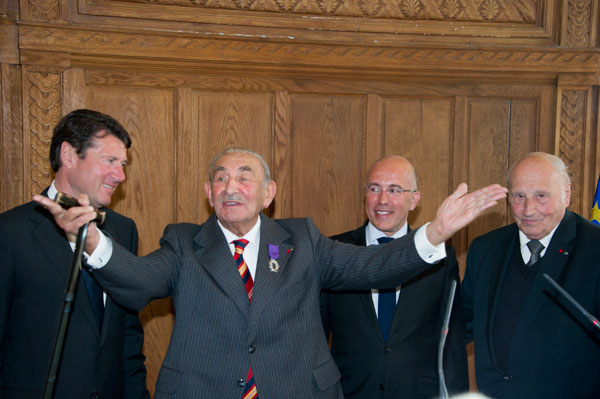 Jérôme Culioli then dedicated the annual CRIF South East dinner in memory of the friend Charles Gottlieb, this witness who encouraged us to remember and announced that the CRIF South East has created this year the Gottlieb Charles Price. The first recipient of this award is Christian Estrosi, in gratitude for having initiated the Voyages of Memory when he was President of the General Council. Through his commitment over the years to the duty to remember, the Voyages allowed to date to more than 11,500 school students to go to Auschwitz Birkenau. 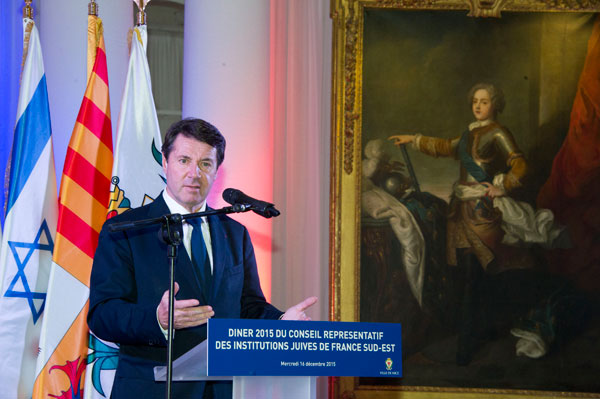 All gathered over Charles Gottlieb’s values

Christian Estrosi, very happy to receive this award, spoke of how Charles Gottlieb mattered to him, who transmitted the memory of the Holocaust but also hope, he who had managed to recover from the terrible ordeals in the “death camp” and devoted his life to the transmission of memory. It is with emotion that he remembered his re-election in 2014: he had asked Charles Mayor to hand him over the scarf of mayor to avoid that to be done by a representative of the National Front. He called for “all to gather over Charles Gottlieb’s values.”
Christian Estrosi then recalled that France was at war against an enemy within. He drew a parallel between what Israel  – his second homeland – has been experiencing for 65 years, managing to be a democratic state, bursting with ideas and innovations, and concluded with these words: “we have no right to leave our children a legacy of barbarism!”
Reflecting on his victory in regional elections against the National Front, he said: “This victory is not mine; my victory is a collective victory This victory is yours.” 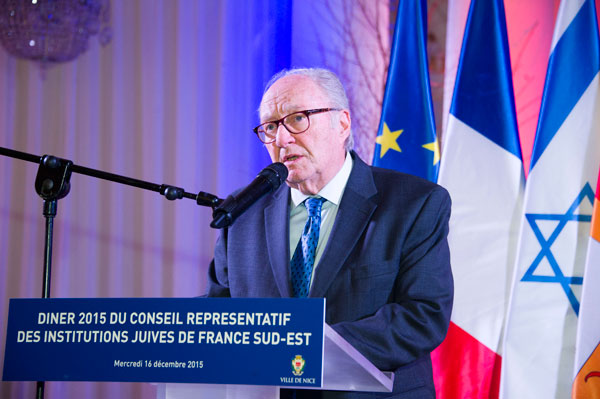 For our children to have a future of serenity

Roger Cukierman, President of CRIF, congratulated Christian Estrosi for his courage and tenacity in defending the values of the republic and thanked his opponent to have withdrawn on the second round. He then criticized the campaign of ram raids and knife in Israel and the attacks in Paris, the atrocious death of 130 victims so young, so innocent. He painted a disturbing picture of antisemitism in France: while the Jewish community is only 1% of the national population, it suffers 50% of racist and antisemitic acts, which amounted to 1,000 per year. Mr Cukierman also lashed the antizionism manifested through the actions of boycott of Israeli goods by the BDS (Boycott, Divestment, Sanctions) and the recent adoption by the European Union (three days after the attacks in Paris!) of labeling the products from East Jerusalem, the West Bank and the Golan Heights. Why no such requirement for products coming from the east of Cyprus, occupied by the Turks, or Tibet, occupied by China? “The European Union treats Israel as the Jew of Nations”, he stressed.
Roger Cukierman concluded by recalling that the French law bans anti-Semitism and called to “do everything for our children to have a future of serenity.” 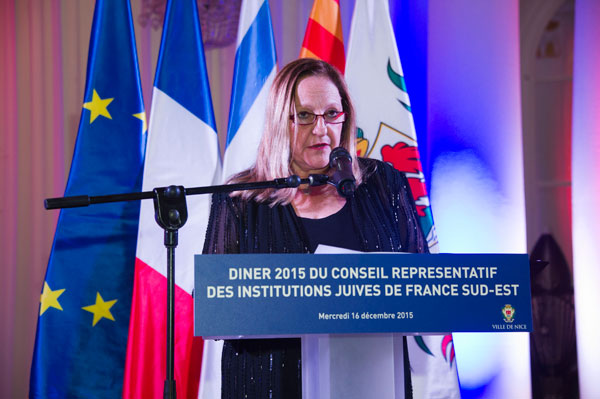 Anita Mazor, Consul General of Israel since August 2015, reiterated the long friendship between France and Israel, strengthened by the recent events. “The people of Israel felt wounded in its flesh after the attacks in Paris!”.
Ms. Mazor has also criticized the exclusion by BDS measures and the labeling requirements of the European Union. She also thanked the police for their presence and vigilance during Hanukkah. Finally, she called to sanctify life and the predominance of love over hate. 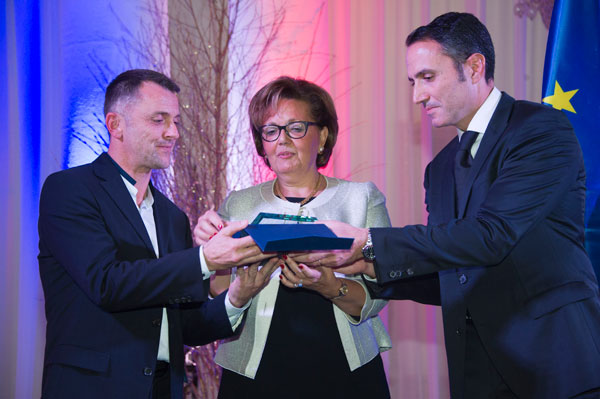 The evening continued with the presentation of the Charles Gottlieb Price to Eric Ciotti (represented at the Dinner), Martine Ouaknine and Eric Goldinger, Deputy Director of Education, Sports and Culture in the Departmental Council. These personalities and Daniel Wancier from Yad Vashem Institue, paid a vibrant tribute to the one who showed the way, that of transmission. Every year, a Charles Gottlieb Prize will be awarded to persons, institutions, associations, who fought against racism, anti-Semitism and intolerance.
Former resistant and deported, Charles Gottlieb died at 90 years on May 8, 2015, the day of the commemoration of the 70th anniversary of the peace. Settled in Nice, he told his history and the horrors of Nazi barbarism in front of hundreds of students, moved and marked by the strength of his testimony. Tireless “memory passer”, he accompanied thousands of students from the French Riviera to Auschwitz during 29 Voyages of Memory.
Charles Gottlieb’s immense work was praised: he formed 11,000 Peace Ambassadors on 61 Voyages of Memory, celebrating 10 years of Voyages of Memory in 2014.
Charles Gottlieb received the Academic Palms on May 6, 2014. 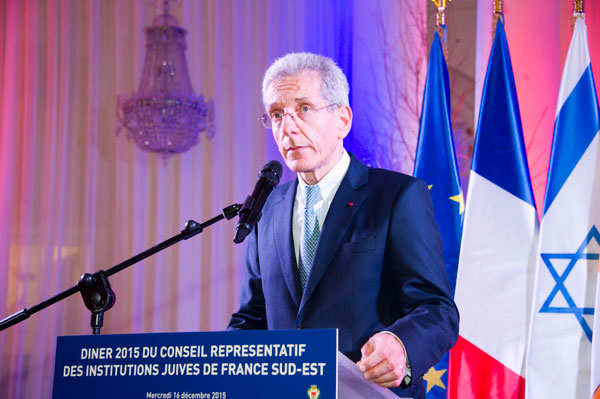 The last speech of the 2015 CRIF dinner was delivered by Adolf Colrat, Alpes Maritimes Prefect, who mentioned the gift of sympathy which allowed Charles Gottlieb to easily build a relationship with young people to discuss the Holocaust, “this black hole in human history, unfathomable abyss of cruelty and inhumanity. “ 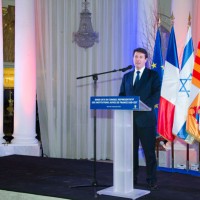 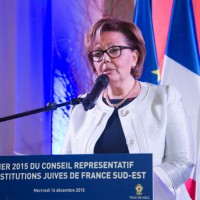 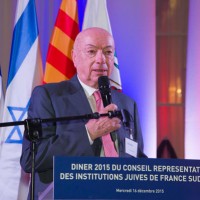 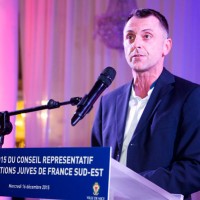 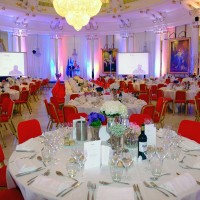 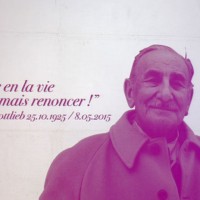