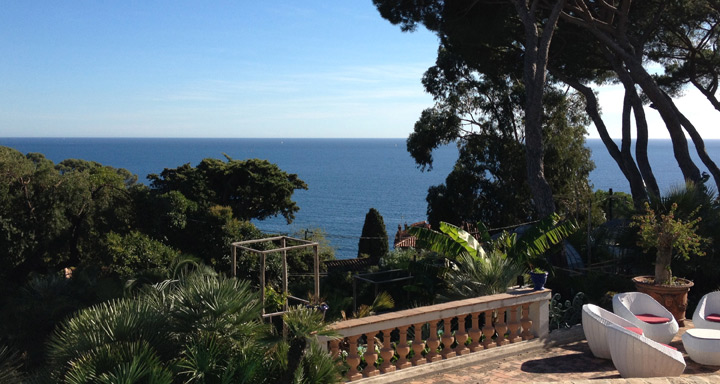 Overlooking the Cap Brun in Toulon, on a balcony by the sea, the gastronomic restaurant Les Pins Penches was born from a love story between Stéphane Lelièvre and his wife Sandrine, both passionate of gastronomy.

In a wooded park several times centenary of five hectares, in the heart of a botanic garden, with lawns gently rolling in terraces towards the sea, Les Pins Penches is a fine upscale gastronomic restaurant praised by all the major gastronomic guides.
Les Pins Penches is affiliated with the Châteaux & Hôtels Collection which selects prestigious addresses of charming hotels and gourmet restaurants. This largest brand in Europe brings together nearly 700 locations in 16 countries. Chaired since 1999 by the famous chef Alain Ducasse, the Collection defends independant hotels and restaurants and invites to travel into the heart of the regions of France and Europe to discover a lively and authentic cultural and gastronomic heritage and places full of history, led by passionate “artisans du plaisir”.

Les Pins Penches were born a few miles away from Cap Brun, in Carquairanne. It was the first establishment created by two students trained in Nice and Marseille Lycées Hôteliers, Stéphane Lelièvre and wife Sandrine, who at 19 and 18, just out of the training, launched their own restaurant in 1988.
Within a few years of hard work, Les Pins Penches – wisely baptized after the name of a neighborhood on the Port of Carquairanne – of an area of 40m2 in its early stage, has largely expanded over the years. As the dream of owning a home was difficult to achieve with the income from a single restaurant, Stéphane Lelièvre made a statement: “We needed two lives to buy a house! Then, to live this second life, we decided to open a second restaurant in 1990, Les Santonniers.”
Thus entailed by his passion for cuisine and labor, as a result of perseverance, regularity and persistence, Stéphane Lelièvre has created and successfully developed within twenty-six years twelve restaurants with a constant state mind: make an in-depth, mediterranean and visual cuisine.
Today, it is operating five establishments: La Table du Port in Toulon (his first restaurant, which now occupies 800 m2), Le Robinson in Hyeres, Les Régates and Les Pins Penches in Toulon, and the new kid on the block, Les P’tits Pins, on the Place de la Liberté of his childhood in Toulon.

Dreaming of a restaurant with the sea view (and some place to park!), Stéphane and Sandrine bought a large property on the Cap Brun with the long abandoned former Château de la Clapière, built in 1831, surrounded by a wooded park. Huge work was undertaken to renovate the house and adapt it to make a restaurant and hotel with four rooms.
At Les Pins Penches, the culinary journey begins in the fragrant gardens on the balcony terraces overlooking the big blue, populated with century old trees (plane, lime, mimosas, cedars, pines trees…), including the largest collection of palm trees in Europe as well as rare banana trees, orchids and an aromatic garden… It continues in the six dining rooms decorated with classic paintings where Stéphane Lelièvre have us enjoy his inventive cuisine, teeming with creativity, a market and seasonal cuisine offering subtile marriages of rich, silky flavors that perfectly harmonise with a pleasant “chewing” feeling.
Along with the gastronomy, Les Pins Penches offer a magnificent reception hall for weddings, receptions or events with a capacity up to 400 people for a seated meal and up to 1,000 people for cocktails. The park, terraces and gardens are also available for garden party dinners with a capacity of 1,000 people or more.

At Les Pins Penches, Stéphane Lelièvre, a fan of “Ratatouille” (whose picture appears in the hall next to that of Prince Albert de Monaco and Gad Elmaleh) always invites the kids in the kitchen where they lend a hand to realize the dessert of their child menu. The children then leave with a toque badged with their name. A way to generate many vocations, as was born his own, since when he used to watch for hours in the evening, through his child’s room window blinds, the service “en torpilleur avec les cloches” of the restaurant in terrace of the Grand Hotel, Place de la Liberté in Toulon.

The table with flavors of autumn underwood by Stéphane Lelièvre

Carpaccio of Ceps and Violet Artichoke, Olive Oil from Ollioules, a Squeeze of Lemon 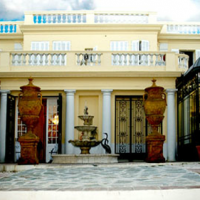 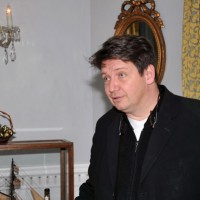 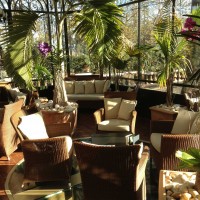 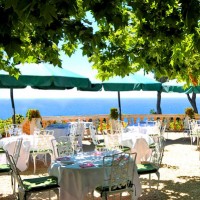 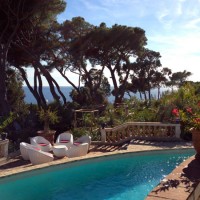 Pool in the park 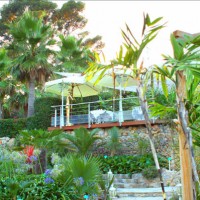 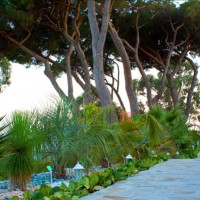 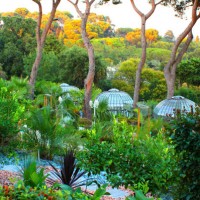 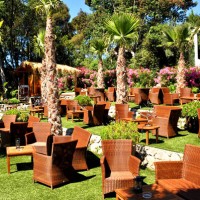 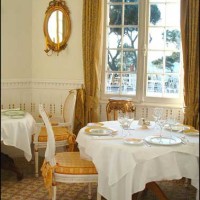 One of the dining rooms 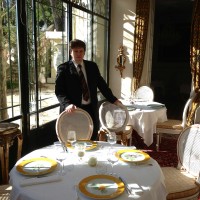 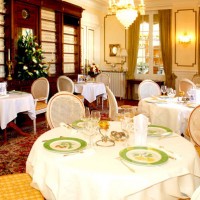 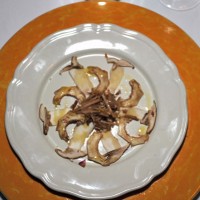 Carpaccio of Ceps and Violet Artichoke 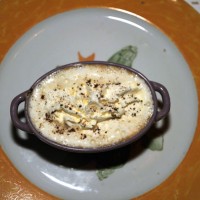 Velouté of Ceps, Salpicon of Lobster 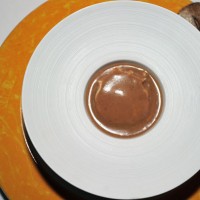 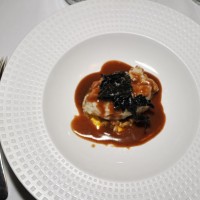 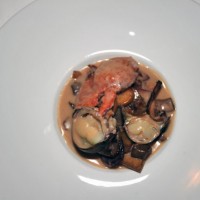 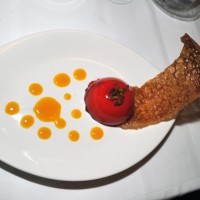 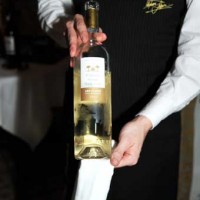 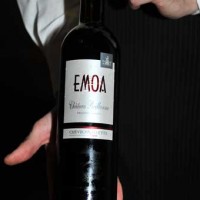 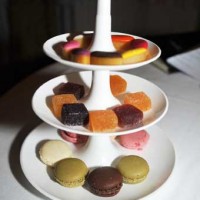 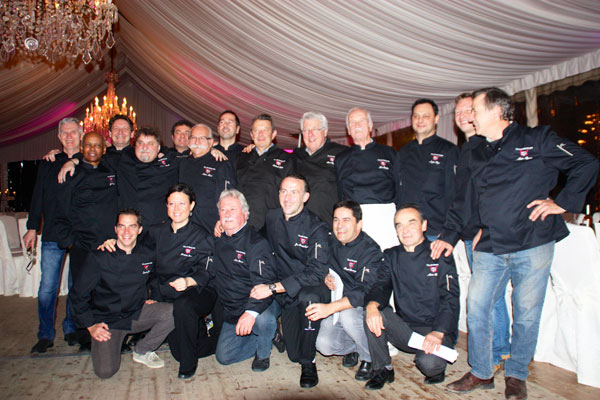 For four years, the chefs of the Var have been offering an annual gala dinner for the Restos du Coeur association created by Coluche. This year, twenty chefs have answered Stéphane Lelièvre’s call and fire up the stove, alone or as a team, for this generous operation that took place on December 12. All the dishes were prepared with donations from chefs’ suppliers. The gala evening to the benefit of Restos du Coeur entertained 290 guests and the revenue of the evening contributed with 25, 430 € to the annual budget of 180,000 € of the Var branch. 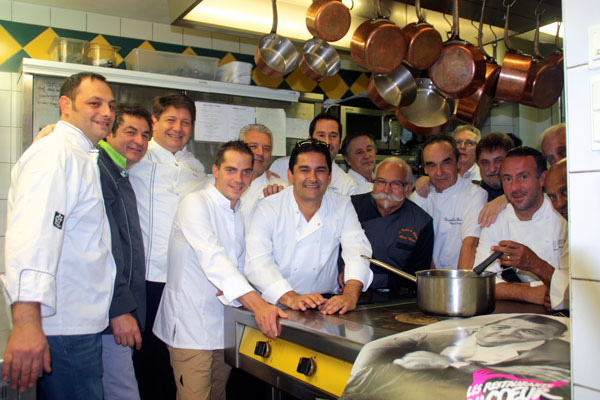 The chefs in the cuisine