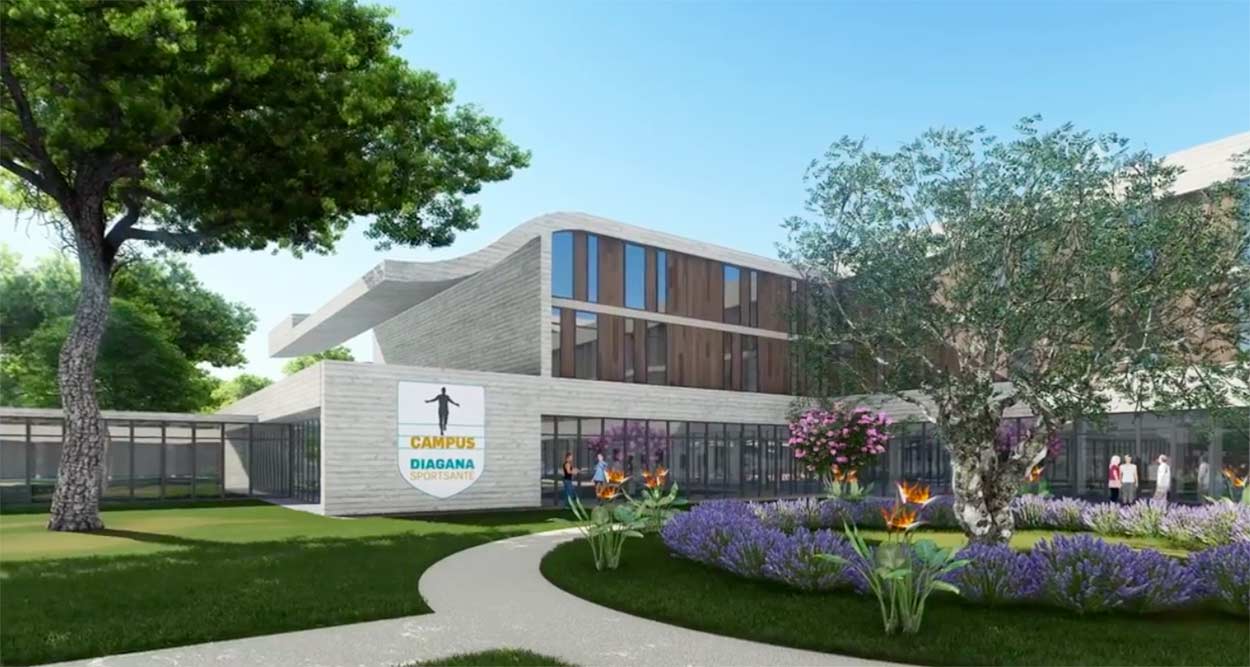 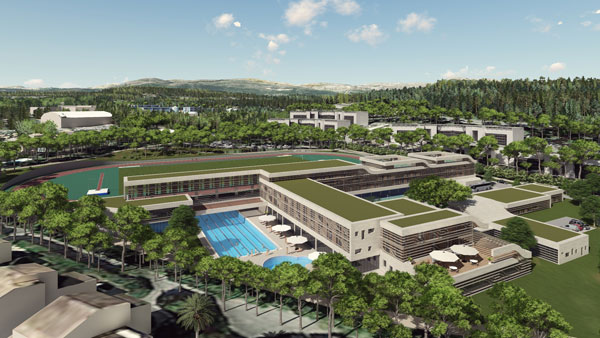 The Campus Diagana Sport Santé is a unique project in Europe former world champion Stéphane Diagana is planning to implement in Mougins after studies and financing.

The Campus Diagana Sport Santé, imagined by Stéphane Diagana, former World Athletics Champion, and his wife Odile Lesage-Diagana, should be established on 7 hectares in Font de l’Orme, near the Valmasque, on the territory of Mougins. The public inquiry stage, which began the same day the two prestigious champions introduced their innovative concept of resort in the presence of Richard Galy, Mayor of Mougins and their architects.

After Patrick Mouratoglou‘s € 70 million complex (the coach of Serena Williams) scheduled to open in July 2016 in Biot, Sophia Antipolis and the town of Mougins will soon welcome the Campus Diagana Sport Santé (Diagana Sport Health Campus), a new and innovative sports equipment, unique in Europe, favoring health through sport. The initiators of this operation, Stéphane Diagana, specialist in the 400m hurdles, world champion in 1997, European champion in 2002 and world champion in the 4×400 relay in 2003, and his wife Odile. These two former top athletes jump obstacles – after a false start in 2012 in Vallauris – to realize their dream of implementing the sport resort on the Côte d’Azur. 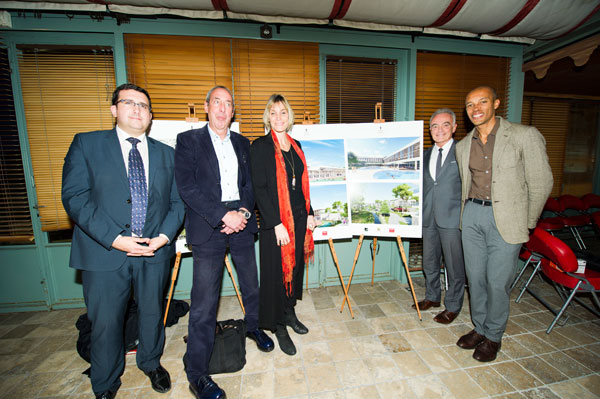 The innovative 30 million-euro complex could finally materialize in a golden triangle, in Mougins, the Capital of Gastronomy, in the hinterland of Cannes, Capital of Cinema, near Grasse, the Perfume Capital, at the gates of Sophia Antipolis, the largest European Technopole. A trial far from being transformed since it remains to study the change of the Local Development Plan. As part of that effort, the public inquiry started, to allow residents to express their opinions on this new site close to their homes. After these multiple hurdles passing, the two designers will have to find investors to turn this far-fetched dream into a sport megalopolis. 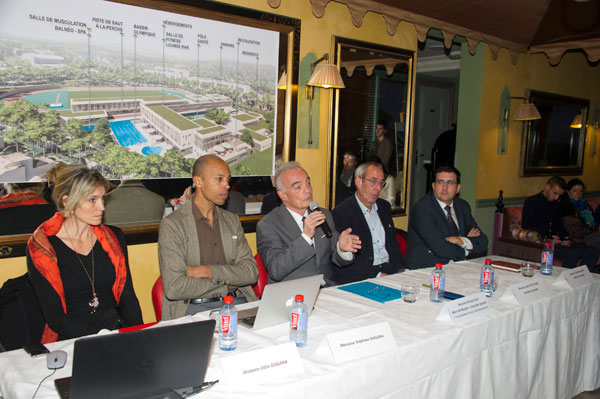 Sport, a tool for public health

During their athletic career, Odile and Stéphane Diagana experienced numerous sports facilities and discern the request and needs to be met for the different sportmen, both in terms of competition preparation accommodation, fitness plan and research for improving health through sport, a major issue in our modern, sedentary societies.
The Campus Diagana Sport Santé will address both the many performance competitors in running, swimming, triathlon or cycling, but also for those seeking a palliative to their sedentary lives and well-being through physical activity, either preventive or therapeutic. On site, they can access various sports and health programs, supervised by expert educators. The slightly less sporting accompanying persons may access the spa (spa, massage, steam room…). The high level athletes will enjoy tailored trainings and fitness courses. 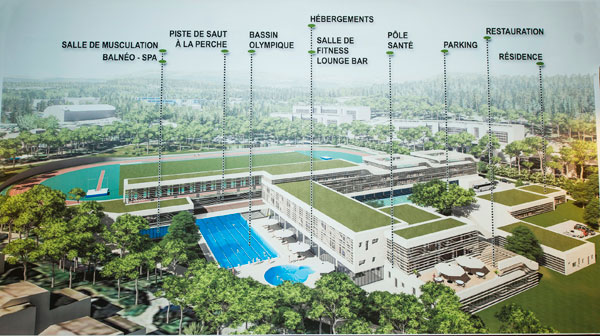 A vast operation of communal land

This project Campus Diagana Sport Santé on 7.6 ha in total (including 4 hectares of exploited surface and 1 400 m2 of reserves to eventually expand the accommodation offer) is part of a vast operation conducted by Mougins, with, as  extension, an operation of 98 mixed housing on 1.1 ha to entrust a promoter with and an open public park on 2.2 ha.
The future complex will also benefit from its position in the Sophia Antipolis site, the largest technology park in France and Europe, its proximity with the Arnault Tzanck clinics and the International Nice Côte d’Azur Airport. 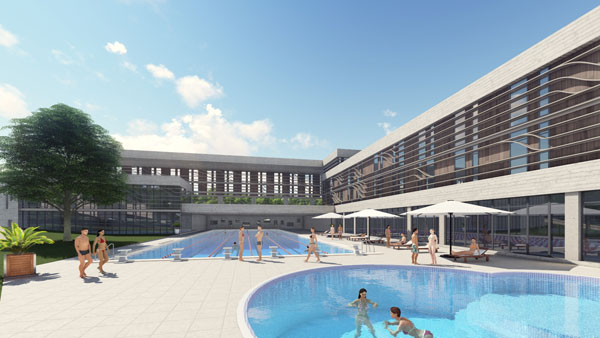 Many tools on performance

The project would include a hotel with 85 rooms, two restaurants, meeting rooms, an auditorium, a spa and a range of reference sports facilities (low-rise volumes, plain materials, metal, stone, wood, glass, green roofs), a 400m 6-lane athletics track and with 5 155m straight, three mat, one for pole vaulting, one for the long jump and another for the high jump, a bicycle ring, a 50-meter pool, an aqua-sports pool, fitness and weight-lifting rooms, a technical platform of evaluation, walking paths…
The future campus will also focus on sports-health relationships and will feature many tools on sports performance to attract specialized research institutions working on power sensors on the athletics track.
Two architects intervened on the project: Dan Costa-Foru, based in Sophia Antipolis, himself a former top athlete, and Nicolas Chabanne, the Chabanne & Partners, a benchmark for sports equipment. 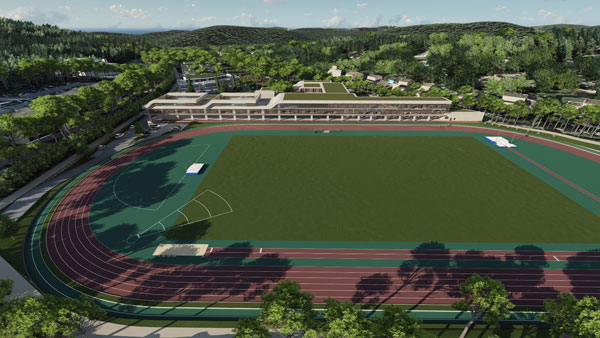 Pleasure must always be there!

Richard Galy, mayor of Mougins declared his satisfaction to see such a sport project taking shape in the Mouginois territory, more accustomed to host the stars of gastronomy that top athletes.
A beautiful postcard in perspective, an ideal playground for all lovers of energy, eager to stay physically active and maintain their health capital through sport. A wellness temple that all hope will spring up very quickly. Eating well is also in the race: “The pleasure should always be there!” said Stéphane Diagana, anticipating some collaborations with chefs from Les Etoiles de Mougins, the gastronomy festival in Mougins.

If everything goes according to plan,the work of the Campus Diagana Sport Santé may be starting early 2017 for an opening end of 2018. 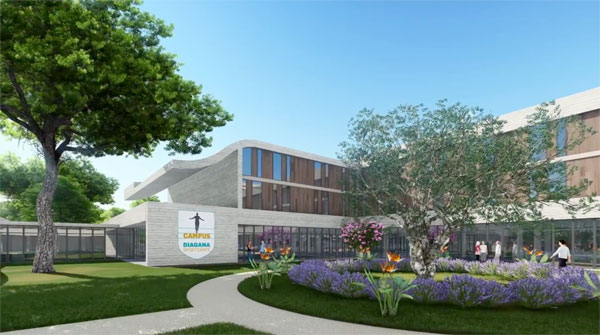