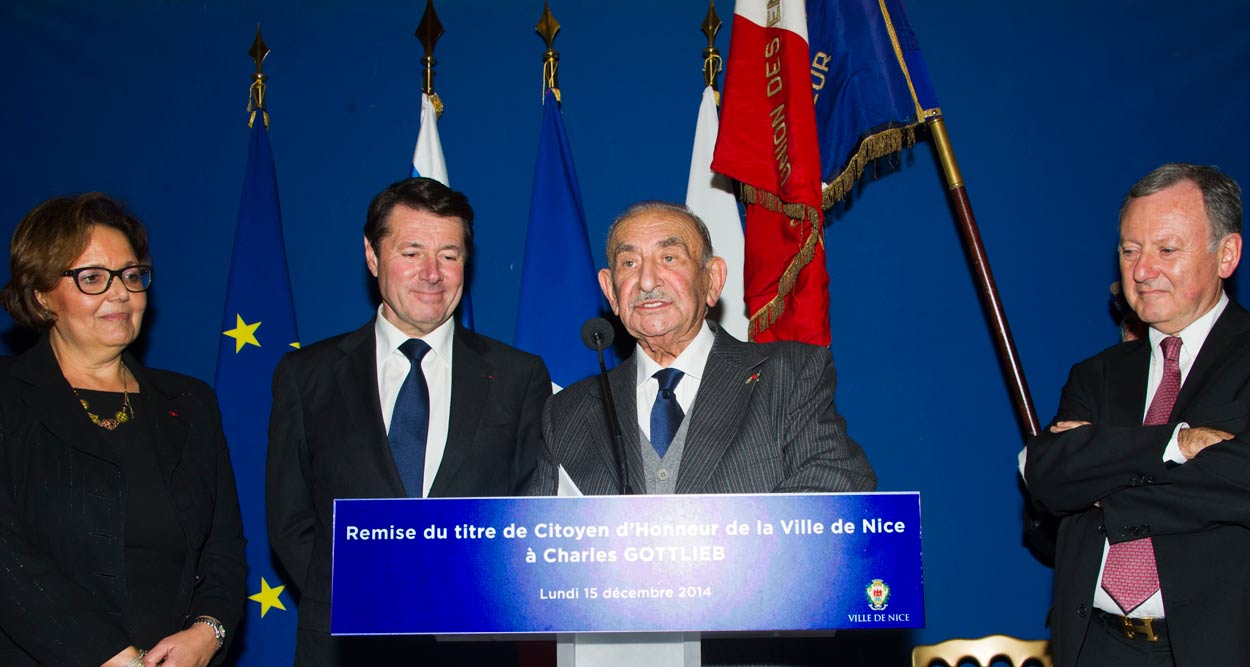 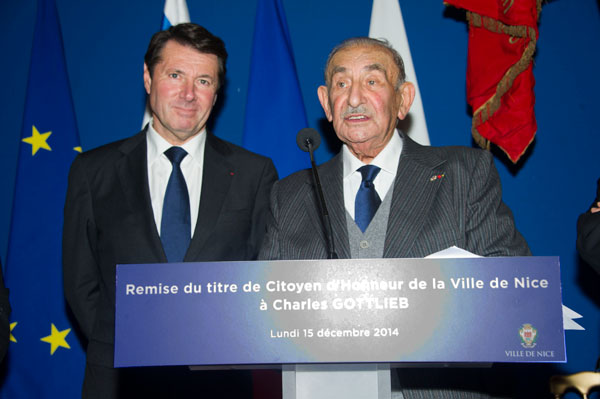 Charles Gottlieb, one of the last surviving witnesses of the Nazi extermination camps, was made Honorable Citizen of the city of Nice by Christian Estrosi.

On December 15, 2014, the ceremony marked by great emotion, took place at the Villa Massena in the presence of the authorities of the city of Nice and many members of the Jewish community.
Charles Gottlieb, with an angel smile, his eyes sparkling with malice and intelligence, with an intact memory and a particular lucidity, will be 85 years old in 2015. Under the tender gaze of his wife Rebecca, he signed with a quick hand, after MP-Mayor Christian Estrosi, the Book of Honor featuring his name forever.

During his speech, Christian Estrosi recalled the long and emotional journey of this great personality who went through the most horrible story of all time, to come back today stronger than ever, given the terrible trials he lived facing the Nazi barbarism. 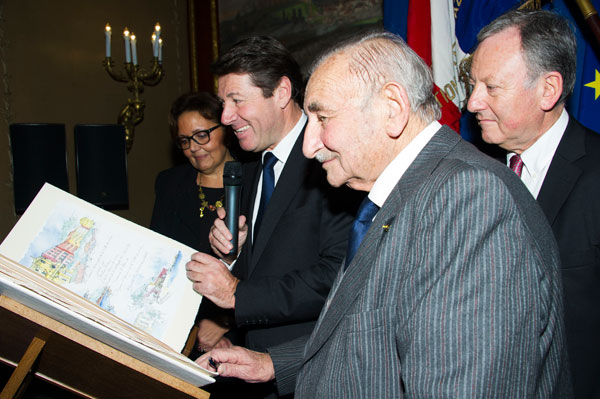 Signature of the Book of Honor

Charles Gottlieb is a son of Polish immigrant. At 16, he joined the resistance. Arrested for acts of resistance Place Bellecour in Lyon, on July 25, 1944, by the French militia at the age of 19 years, he is tortured in Klaus Barbie’s offices in Lyon. He was then deported on August 11, 1944 to Auschwitz-Birkenau.

After experiencing the worst suffering, Charles Gottlieb is now acting as a living witness of the Holocaust. He has become a major link in the transmission of this memory and made of Nice an exemplary city in terms of remembrance.
This miraculous survivor of the Nazi barbarism is today a living memory, tirelessly traveling from college to high school in the Alpes-Maritimes. 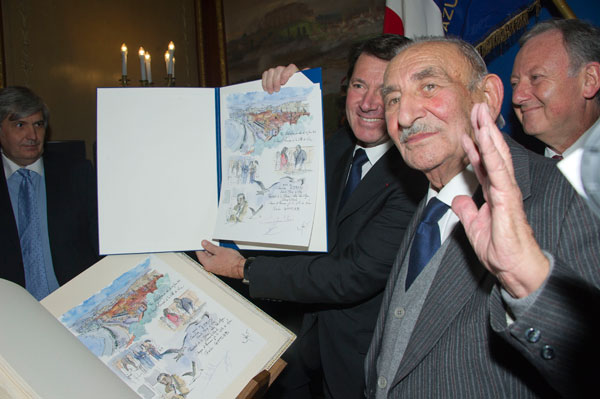 The Book of Honor

Charles Gottlieb is constantly reminding the young students of secondary schools in Nice and the surrounding of his history. His arrest, this train that took him to the death camps with 700 other prisoners, out of which only 80 will escape the gas chambers.
His arrival at the Auschwitz-Birkenau camp. “I will always remember what a deportee told us on arrival: “You see the smoke over there? Here, we enter through the door, we go out of the chimney… There was a smell of grilled meat, it was the crematoria; we have understood…”
Then, the terrible names calls that lasted for hours by -10 degrees and that infernal winter 44-45 when the temperature dropped to -30, and during which, those who collapsed, were dying at your feet. 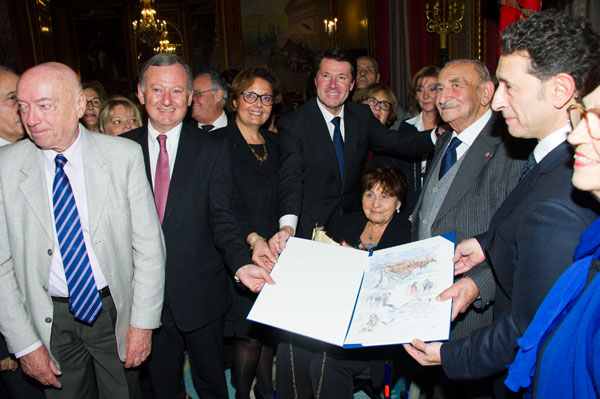 “The SS had us dig a 6 meter-deep trench to install a pipe under a road, then, at the time of filling it in, they knocked some people down and ordered us to cover them. I buried some deportees alive, it still haunts me today!”
He added: “We were not allowed to cry or whine, just pray when, at night the SS came to inspect the head of the deportees in their sleep. How do you want us to have lice, our head was shaved! It was their famous selection… those who were supposedly found with lice went directly to the gas chamber.”

The journeys of memory

Today, Charles Gottlieb accompanies young teenagers in our department to the journeys of memory organized by the General Council of the Alpes-Maritimes, to better show them what millions of deportees were experiencing during these long years of hell and destruction of the human being.
During these 31 long journeys of remembrance, Charles Gottlieb has continued to show them and explain to them how this infernal machine of extermination called “final solution” by the Nazis was working.
And to recall too: “When I went out of the camp, I weighed about 38 kg for 1.72 m, but I was alive. I always knew that I would get out of this. When they tattooed my registration numbers on my arm, I have told the Boches: Do not make it too big, because when I get out, I wish I could erase it.” 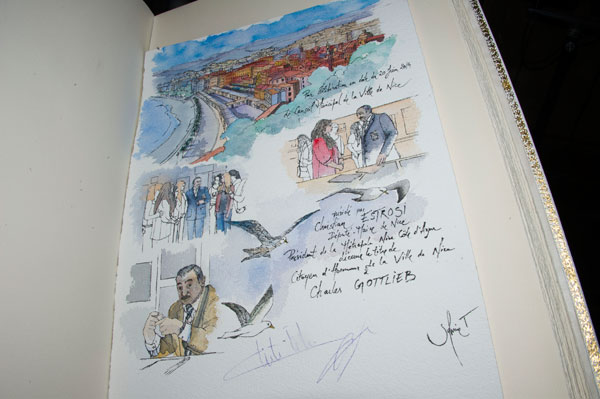 The choice of life

Christian Estrosi added: “Charles, you were a young man who, despite these months spent in hell from where no one never returns, had kept the enthusiasm of youth, the absolute expectation of life and liberty, equality and fraternity. You are the ones who made the choice of life against death. And with you, life triumphed!” 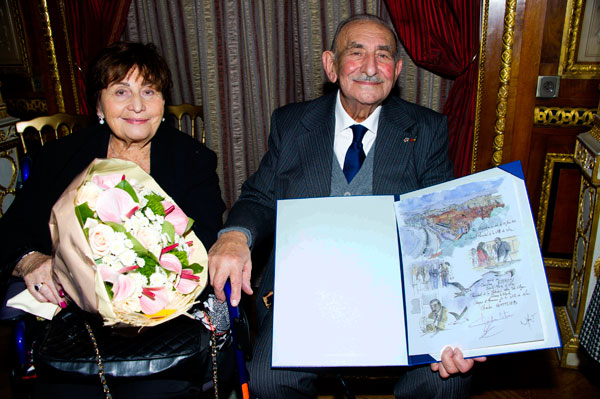 Thank you Charles for being here today among us, thank you for your countless efforts to testify at all costs until your last breath on earth, thank you for all the young people who, thanks to you, know the silence, the watchtowers, the expansive barbed wire, the remains of the crematoria and the history of these men, women and children who still live through you. 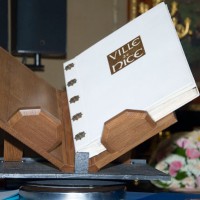 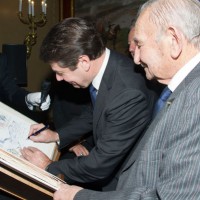 Dedication of the Honor Book 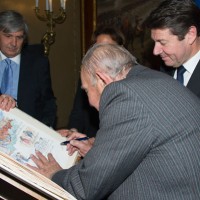 Signature of the Honor Book