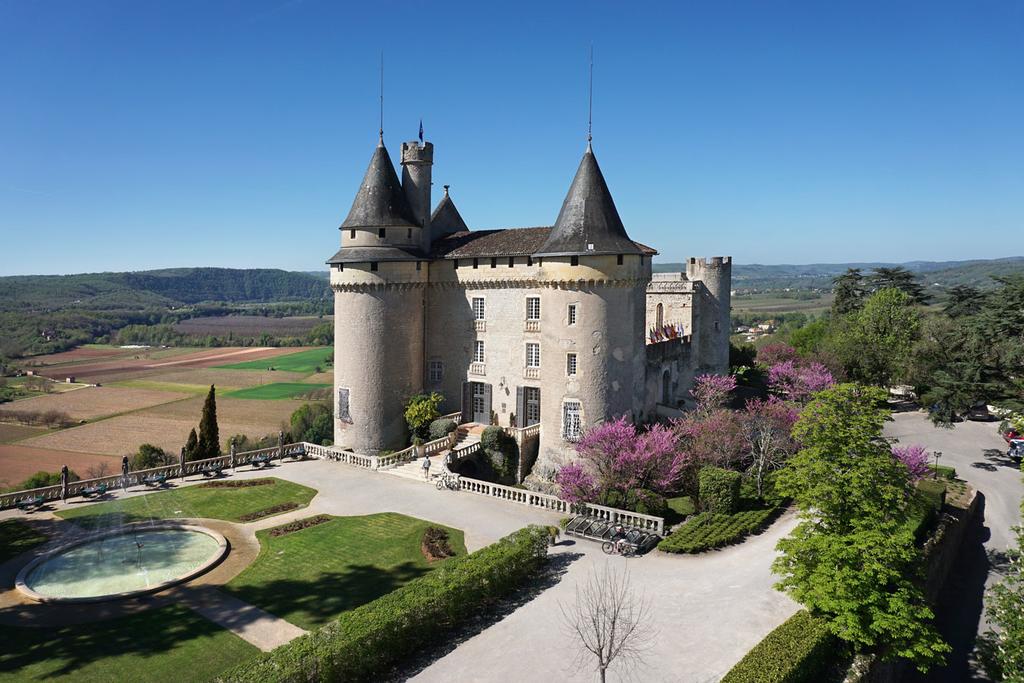 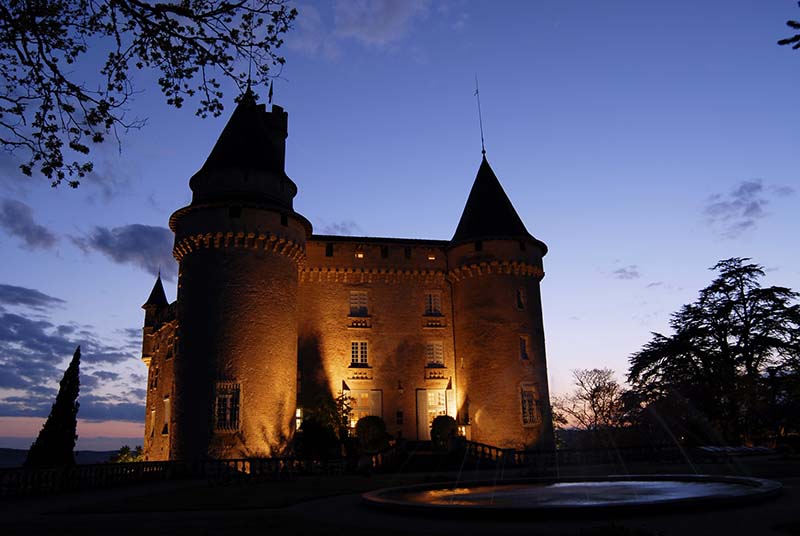 The Château de Mercuès****, the wine estate with delicious starred gastronomy, is located in the heart of the land of the black truffle of Lalbenque, lamb of Quercy and wines of Cahors.

The Château de Mercuès is a 35-hectare wine estate in the Quercy, belonging to the Vigouroux family since 1983. The vineyard is located in the heart of the Cahors appellation, in one of the Lot’s large meanders on the gravelly slopes of the hills formed by the river. The estate owes its name to the majestic castle of the 13th century perched on a rocky peak overlooking the Lot Valley. Built in the Middle Ages by the Counts-Bishops of Cahors, the castle, listed among the most beautiful historical monuments in the region, has become a sublime Relais & Châteaux. 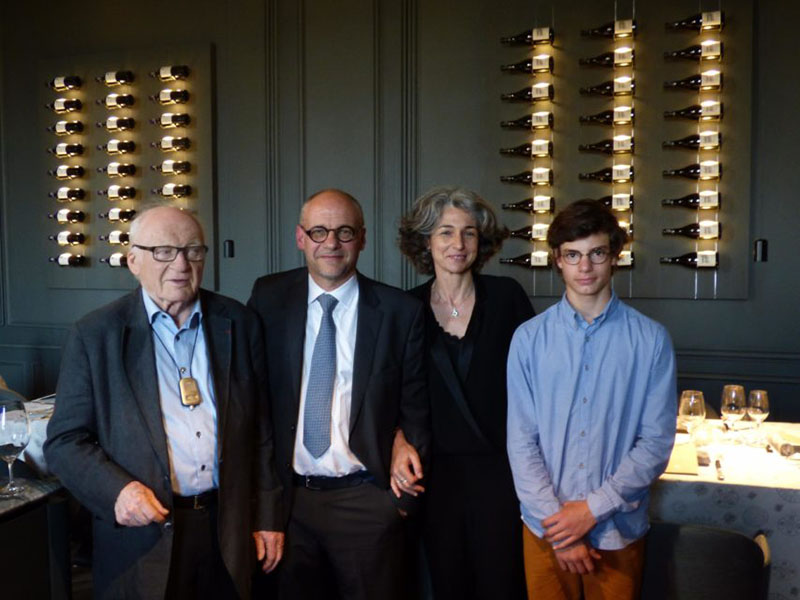 Overlooking the Lot Valley and the famous vineyards of Cahors, the majestic Château de Mercuès, set on a rocky promontory, has however suffered the ravages of the Hundred Years’ War and the wars of religion. Many times pillaged and burned, the castle has kept over the centuries its medieval past and its architecture sculpted by the different artistic currents of the times it has gone through. Since then, the Château de Mercuès displays its angular profile, its fortified walls in old stones, its towers in the form of pepper pots and its small chapel, to the tourists’ marveled eyes who come to visit it. Today, this perfectly preserved historic site has become a luxurious 4-star Hotel Relais & Châteaux that is combining culture, history, viticulture and gastronomy in perfect harmony. 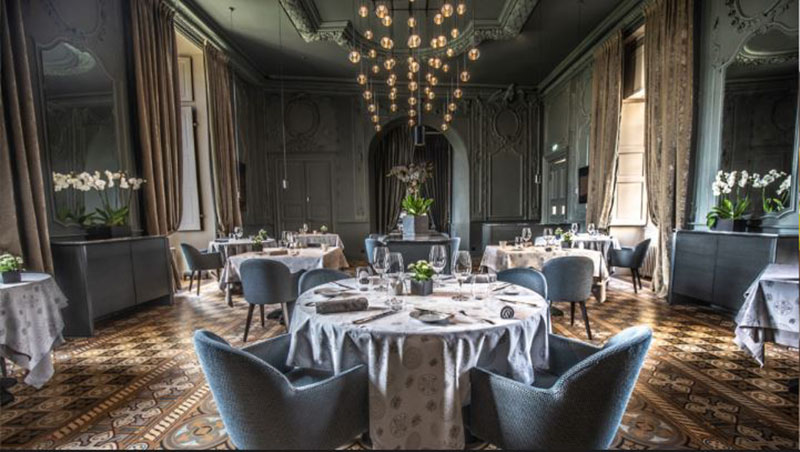 A pioneer of wine tourism, Georges Vigouroux concretized his passion for wine with the acquisition of Château de Mercuès in 1983. He undertook huge reconstruction work to restore Mercuès’ important status. After working to restructure the vineyard on the surrounding gravelly ridges, and to replant Malbec grapes on clay-limestone soil, ideal for growing grapes, he took care to protect the site until 2010. Then, his son, Bertrand-Gabriel, took over the reins of the winemaking and hotel domain. 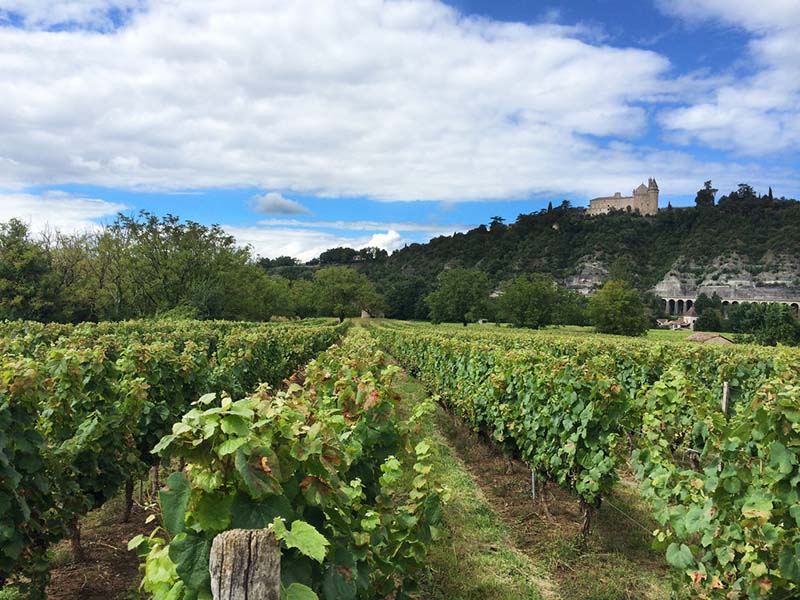 A decoration worthy of the greatest palaces

Bertrand-Gabriel Vigouroux entrusted the decoration of the castle-hotel to the architect Axel Letellier, specialized in heritage conservation. He has given back to each room their original style by baptizing them Renaissance, Louis XV, Louis XVI, Art or Empire. From now on, this chic and elegant historic site offers a comfort worthy of the greatest palaces. The Château de Mercuès is today one of those places we imagine, dream, invent.

The castle, a haven of peace, blends into a labyrinth of corridors, stairs, terraces allowing access to 24 atypical and luxurious rooms and 6 suite spreading over seven floors. Attentive to details, the Vigouroux family have made sleep a real dream. All the bedding has been carefully chosen, such as the hand-stitched Treca mattress, the upholstered beds, the box-spring beds, the duvet covers and the mixed pillowcases, made by a specialist in fine lingerie. The rooms are arranged with televisions and mirrors that perfectly fit into the decor. Each room has a terrace or a hanging garden and offers all a breathtaking view over the vineyard of the valley or the garden of the property. In fine weather, the swimming pool is the ideal place to relax and enjoy a delicious homemade cocktail. 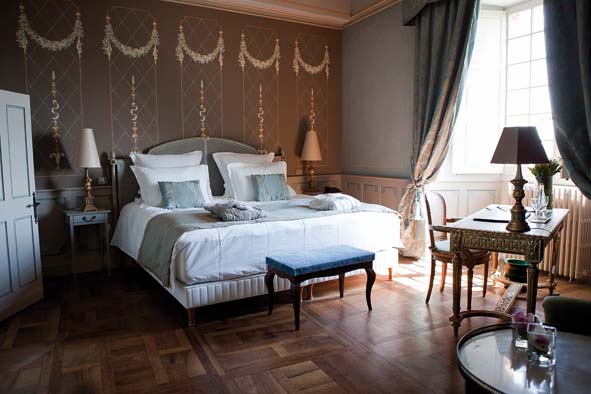 The Château de Mercuès also comprises two restaurants: Le Bistrot du Château and the gastronomic restaurant Le Duèze. To awaken the taste buds, the Bistrot du Château offers a chic, light and original bistro-style menu, inspired by the daily market, evolving according to the seasons, featuring Tomato Tartare & Smoked Salmon accompanied by its Olive Oil and Basil Sorbet, its Bigorre Ham in Totti in salad or its Chocolate Tartlet and Mint Sorbet. All these delights are to be enjoyed on the terrace overlooking the Lot Valley 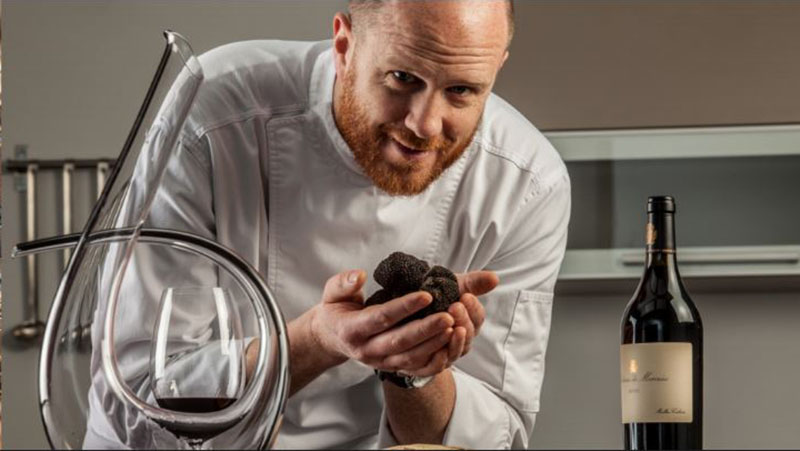 The Michelin-starred chef Julien Poisot is officiating at the gastronomic restaurant Le Duèze. He was chef at age 23 at La Manufacture in Châteauroux after having started at the Saint-Ambroix Abbey in Bourges alongside François Adamski. This former second from Patrick Bertron at Relais Bernard Loiseau in Saulieu and chef at Tante Louise in Paris, has gained an international reputation for the wonders he is concocting.
The selection of products he offers, selected from local producers, are exceptional in quality and sublimated with respect and creativity into pure delights for the palate such as Black Truffles of Lalbenque, the Lamb of Quercy, Asparagus and Morels, the Dos of Sander cooked in a pot of Aromates, the Pigeon au sautoir with Moelleux of Peas with Tarragon. The saffron and herbarium of the estate come in tune with all these king’s dishes. 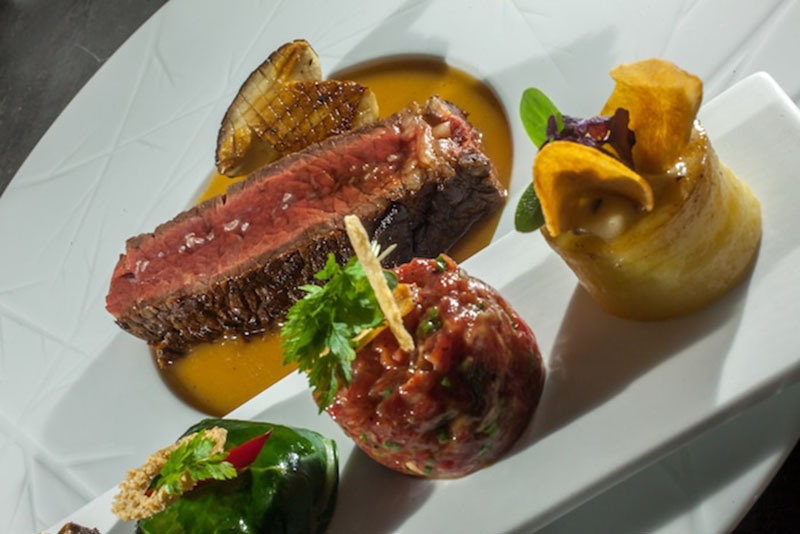 The chef from Burgundy has easily adapted to the Lot terroir with great finesse, malice and subtlety. The menus of the two restaurants revolve around the great wines of Malbec and the wine produced and raised at the château, because before being the owner, Mr. Vigouroux is a winemaker.
This magnificent establishment is also dedicated to the making and aging of exceptional wines. Located along the River Lot, its magnificent meanders and slopes serve as a thermal regulator to the grapes. Its location between the Mediterranean and the Atlantic Ocean gives it optimal levels of rainfall and humidity for the quality of its vines. 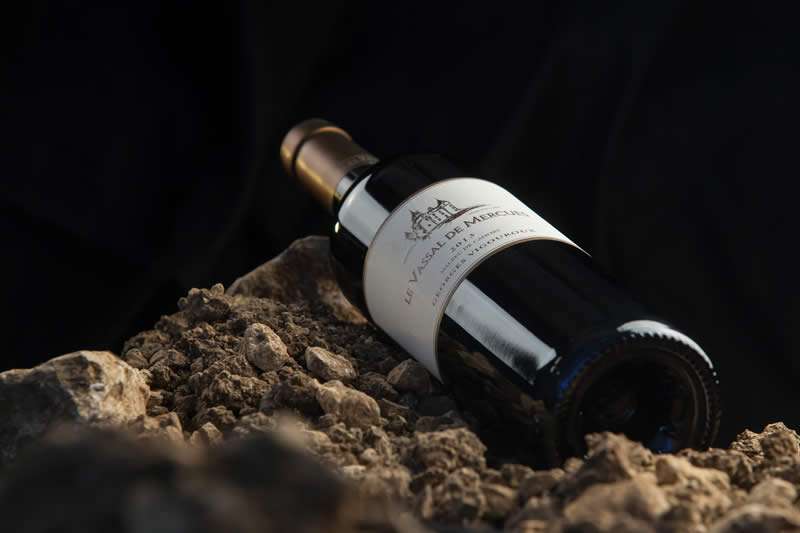 The vineyard spreading over the towns of Caillac and Mercuès, its owner Georges Vigouroux decided during his takeover, to replant this clay-limestone soil ideal for growing vines with Malbec grape vines. Alongside the vineyard which now extends over 32 hectares, a monumental underground cellar for winemaking and aging has been built under the castle gardens: a grandiose achievement often compared to that of the Château Lafitte winery. 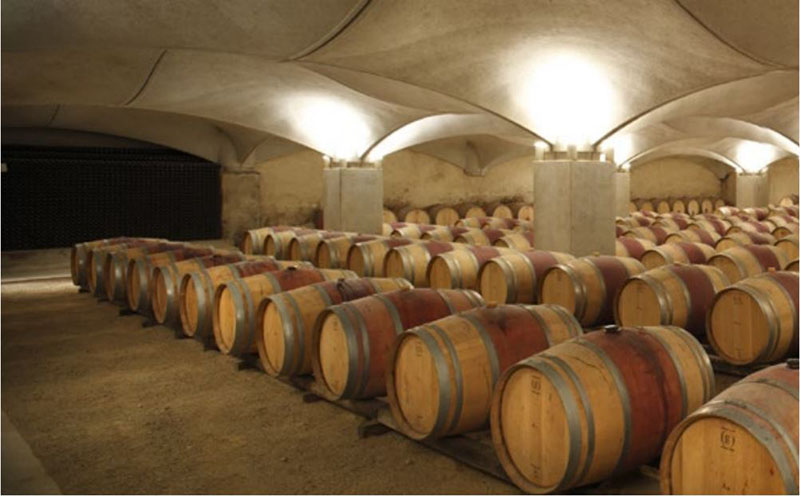 The particularity of Château de Mercuès is the choice of a very high planting density since to date, more than 50% of the vineyard is planted with 6666 vines / hectare (65% more than the local norm), making Château de Mercuès the narrowest plantation of the entire Appellation. During their stay in this Vintage Wine Hotel, tourists can visit the famous winery, dug out of the rock under the gardens of the castle. They will also have the opportunity to taste some great Malbec vintages, the specialty of the domain. 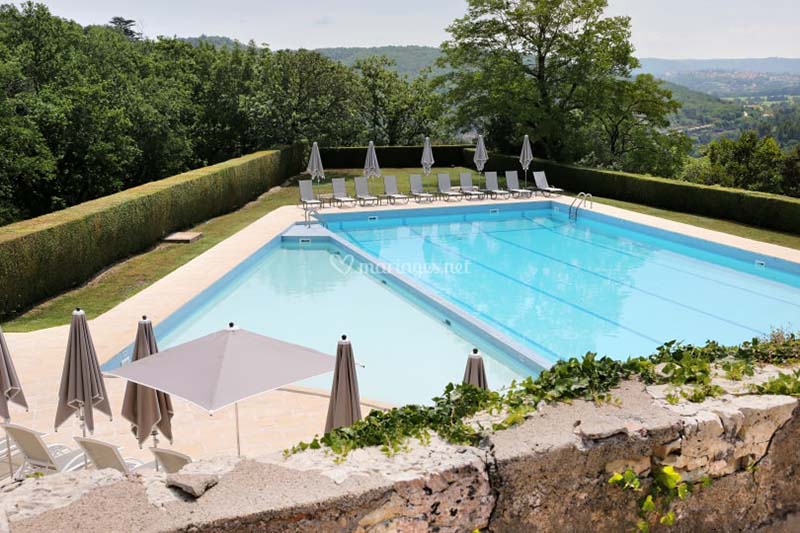