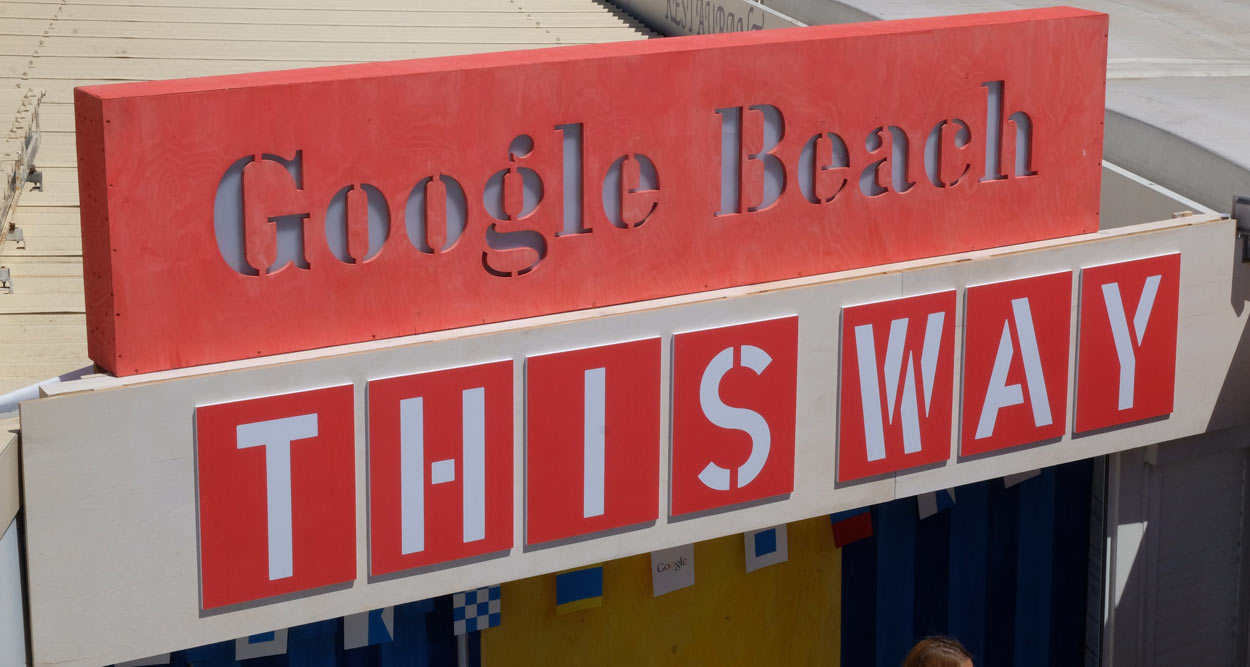 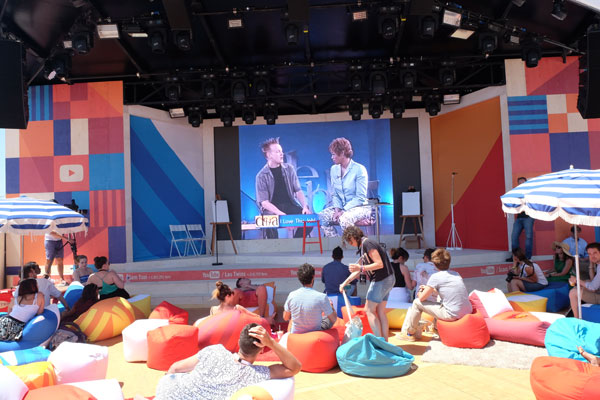 The Google Beach at 2015 Cannes Lions, designed by Anthony Burrill, celebrated ten years of YouTube through many playful and educational activities and events under the sun of South of France.

In the context of YouTube‘s tenth anniversary, over the Cannes Lions week, the Google Beach was inviting the Cannes Lions delegates to play with the latest technology through demos, relax on a mattress by the Mediterranean between educational Lightning Talks or hangout with the greatest YouTube stars like The Slow Mo Guys, Les Twins and Grace Helbig and Mamrie Hart. The Google Beach also hosted Tone It Up fitness and baking events with Cupcake Jemma, creative industry talks, DJ sets, and an inter-agency beach volleyball.

Open to all International Creativity Festival delegates, the Google Beach on La Croisette, close to the Palais, is the Plage To Be to experiment digital technology and educational games, mixed with the simple pleasure of being by the sea to relax between two seminars at Cannes Lions. The Beach was showcasing great achievements in digital creativity and highlighting YouTube new creative technology, opening exciting ways of expression. The daily Lightning Talks, workshops and demos were conceived to provide the creative community with a platform for collaboration and relationship building. 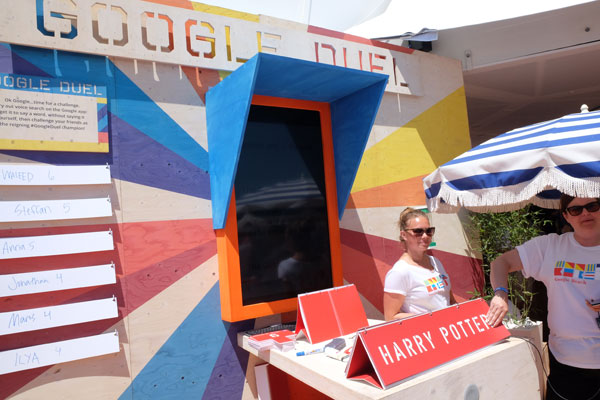 Ok Google… Time for a challenge! Delegates had to try out the Google Voice App and get it to say a chosen word without saying it themselves. Then, they could challenge their friends as the reigning Google Duel champion. An enticing game, where you have to find the right question for the Google App to tell the right word! 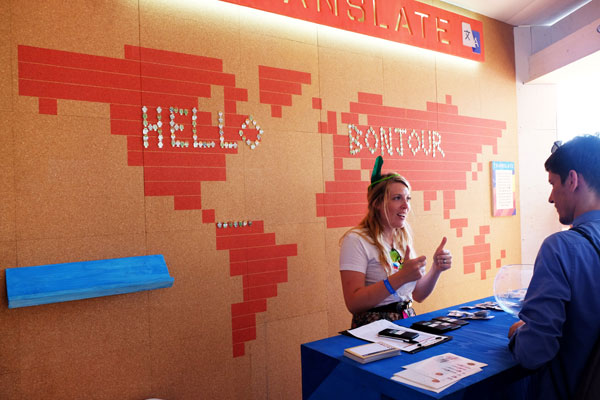 Google Translate’s new and most innovative Word Lens feature instantly translate written words on your phone screen simply by pointing your iPhone’s camera at them  – even if you’re offline. The Google Beach visitors could have a go at the Word Lens Quest. Through automatic language detection, the text is translated word to word but is of great when you need to decipher a sign or a restaurant menu in a foreign language. Having a conversation between two people who don’t speak the same language is therefore actually possible… 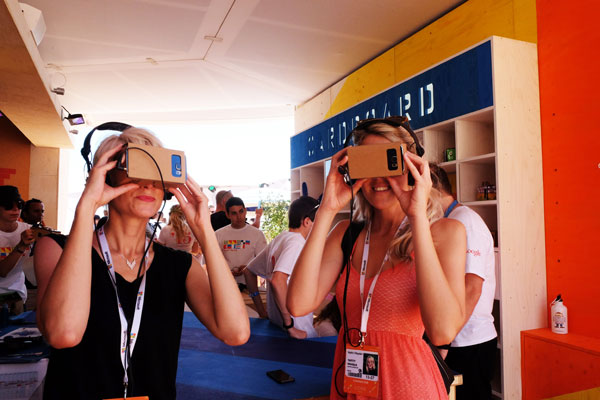 Brand new YouTube 360 Content for Cardboard is giving a new way to connect with viewers by sharing awesome 360-degrees videos, providing users with a truly immersive experience of a simple, fun and thrifty way to explore virtual reality. The visitors could pick up a viewer, customize it with Anthony Burrill stamps and take it away. 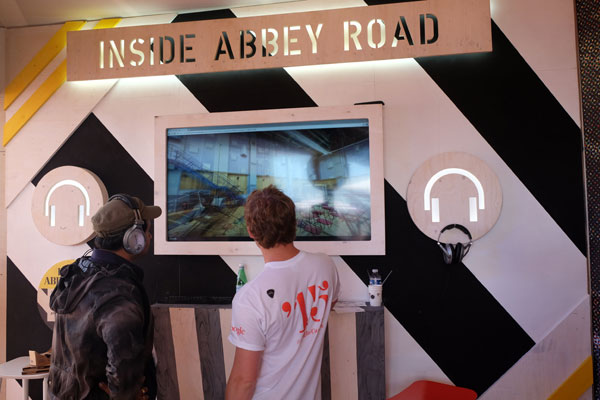 Google invited the cannes Lions delegates to visit the legendary Abbey Road music studios, the mythical recording place of many albums since 1931, including the Beatles’ album of the same name, released in 1969. On the program: visit of the studios, guided by a voice-over, navigation across the different recording studios through animated and scenes with sound and play with the gadgets based on their iconic recording equipment. 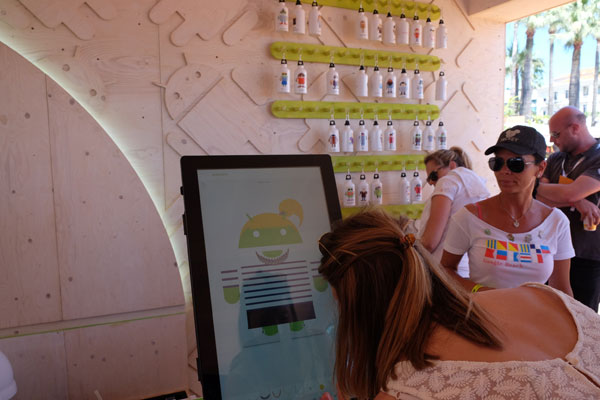 In this ludic activity, the visitors had to create their own Android character and accessories, signature move and, once their creation, shared, it was printed on an Androidify water bottle, made of fully recyclable aluminum and copper. 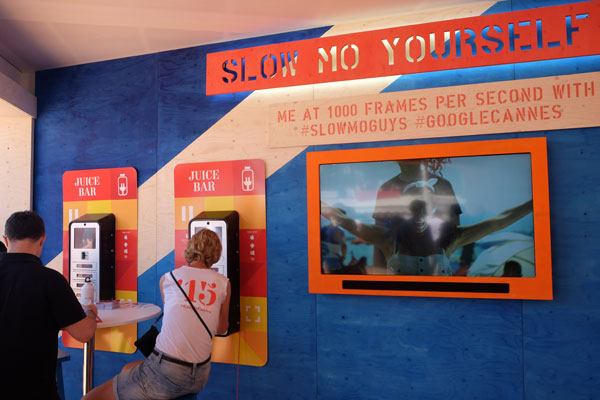 Cannes Lions delegates could find out how they look at 1,000 FPS in their own slow mo video starring the top YouTube creators The Slow Mo Guys who have racked up over 5 million subscribers through their super-slow-motion antics. 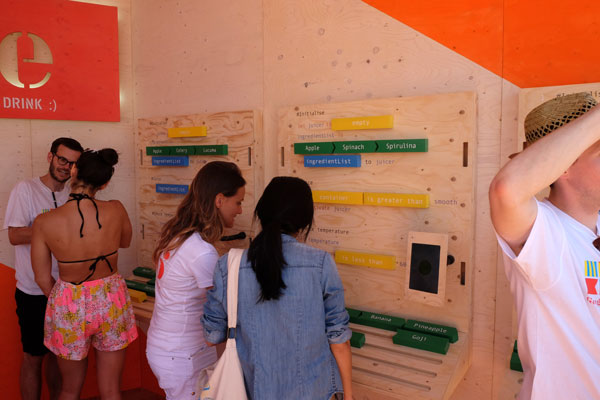 Between the activities, the Google beach visitors could enjoy a smoothie at the central bar or create their own cocktail at the Bar Code. But, even if no need to be a html expert to quench one’s thirst: the code line were created with wooden block to place on a board linked to a device.

A graphic artist, print-maker and designer, Anthony Burrill’ work, in which words and language are an important part, is held in the collections of the Victoria and Albert Museum in London, the Cooper-Hewitt National Design Museum, New York and has been exhibited in galleries around the world. Anthony Burrill already worked on the space last year, but he has extended his personality well beyond texts and slogans, being closely involved in every aspect of this year’s look, from little stickers that go on plastic cups right to the main five-meter high stage. 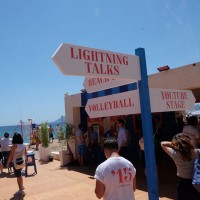 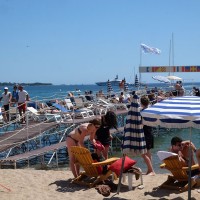 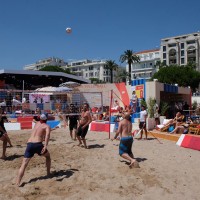 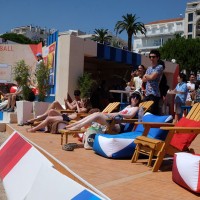 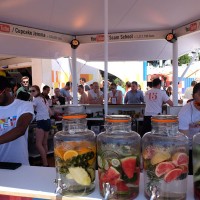 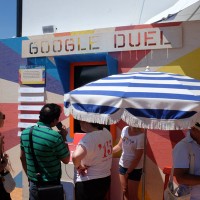 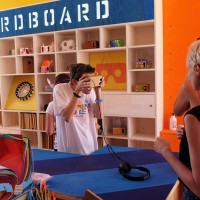 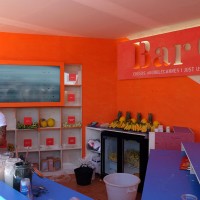 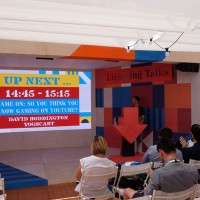 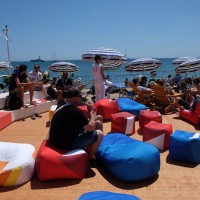 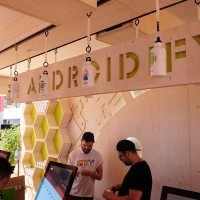 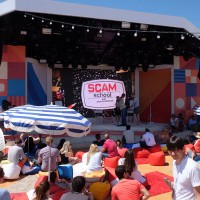 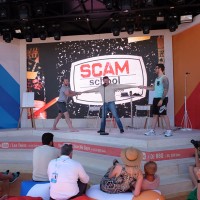 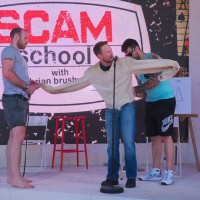 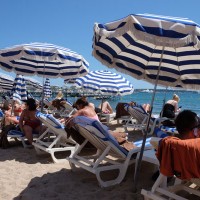