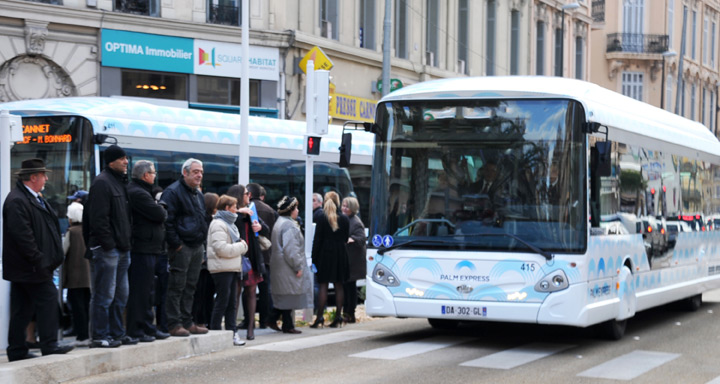 Inauguration of Palm Express in Cannes

The Palm Express, the Bus Line with High Level of Service – BHNS – was inaugurated on December 12, 2013 in Cannes, as well as urban improvements made Boulevard Carnot.

The inauguration was attended by the Deputy Mayor of Cannes Mr. Bernard Brochand, the Sub-Prefect of Grasse, Mr. Rachid Bouabane-Schmitt, the President of the General Council of the Alpes-Maritimes, Mr. Eric Ciotti, the First Deputy to the Mayor of Cannes, Mr. David Lisnard, the President of the Syndicat Intercommunal of Public Transport, Mr. Jean-François Tonner, the Mayor of Mougins, Mr. Richard Galy and the Mayor of Mandelieu-La-Napoule, Mr. Henry Leroy.
In the morning, a crowd gathered on the Place Vauban to witness the arrival of the first blue and beige brand new BHNS (renamed “Palm Express”), from line 1, with onboard the Cannes delegation. A second Palm Express arrived, with on board Mr. Eric Ciotti.
After the ribbon cutting ceremony and the discourses of politicians, everyone happily congratulated the end of this work, long awaited by the residents of Boulevard Carnot.
Then all gathered to unveil the stele installed place Vauban in memory of Charles Schaumann, a bus driver who died in the performance of his duties in 1977.

The line Palm Express of Bus with High Level of Service Le Cannet – Cannes – Mandelieu is one of the most important projects in the department regarding public transport. By 2016, a 11km line will link the towns of Le Cannet, Cannes and Mandelieu and transport nearly 134,000 users on 25 bus stations.
Key locations of these three cities will be served: Lycée Carnot, Cannes SNCF Station, Palais des Festivals, Cannes Bus Station, Place du Marché in La Bocca, Les Tourrades business park, Mandelieu-la-Napoule Bus Station. The Palm Express bus, which runs today on a lane for its only traffic, arranged in the central part of the road, has a priority at traffic lights.
The implementation of the new Palm Express service is a new offer of movement more effective, faster and more reliable that these three municipalities will offer. Due to its regularity and to the in real time information at each station, it will allow the traveler to determine the travel time at any hour of the day.
The opening hours will be from 5:00 am to 12:00 pm in 2016 with optimized course time. Thus, to join the Square Carnot to Mandelieu, it will take less than 40 minutes on average (an hour before), at a speed of 17km/h and a frequency of passage every 6 minutes (against 12 minutes today).
The benefits of this new line now exceed the Cannes basin: 7 lines of departmental intercity bus network will take advantage of the time savings offered by this new development. The layout of the new line has greatly beautify the crossied arteries and provided a new attractiveness to the served neighborhoods by providing a new urban dynamic.

The General Council of the Alpes-Maritimes is pursuing a policy engaged in the field of travel, the difficulty of living in transport is today a major concern among citizens. A concern that is demonstrated through investments in roads and intercity public transport or the financing of innovative mobility solutions.

However, the authorities have indicated that the traffic conditions of cars and two wheelers, sometimes difficult on the sections occupied by the new Palm Express line, especially on Boulevard Carnot, are still under consideration. 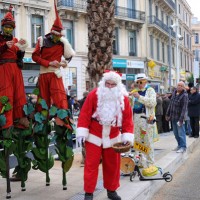 Waiting for the Palm Express 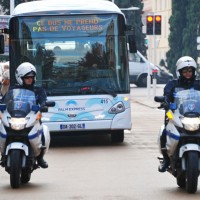 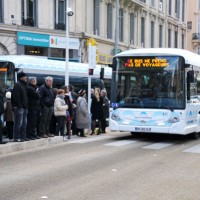 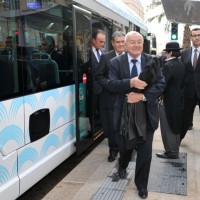 Mayors get off the Palm Express 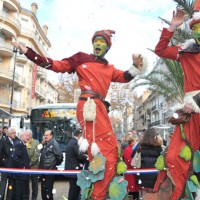 Feast atmosphere for the inauguration 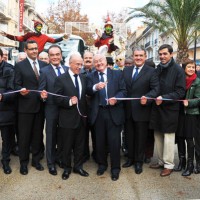 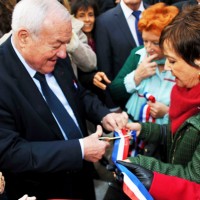 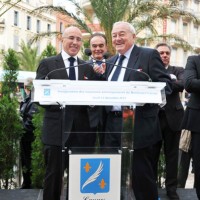 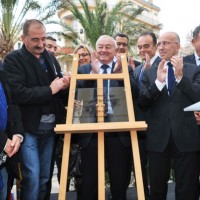 Inauguration of Palm Express in Cannes was last modified: December 18th, 2013 by tamel