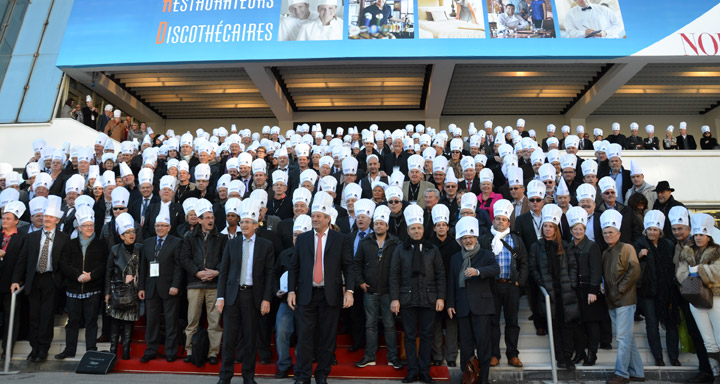 The atmosphere was electric on November 28 in the Grand Auditorium of the Palais des Festivals in Cannes for the visit of Minister Sylvia Pinel at the 61st National Congress of UMIH (Union des Métier et des Industries de l’Hotellerie – November 25 to 28).

At her arrival, accompanied by Mr Roland Heguy, Confederal President of UMIH, Ms. Sylvia Pinel, Minister of Crafts, Trade and Tourism, was welcomed at the foot of the Red Carpet trodden by stars of the Cannes Film Festival by Mr David Lisnard, 1st Deputy to the Mayor of Cannes and President of Palais des Festivals.

But the atmosphere was less warm in the Grand Auditorium. The Minister knew that the task of exposing and defending the ideas of the Government would be difficult in front of a profession which came to Cannes UMIH National Congress to express its bitterness and concerns. Sylvia Pinel found a packed hall, with all UMIH members  wearing a white hat toque bearing the words: “Sacrificed But Not Resigned” to show their discontent.

In his opening speech to the Minister, Mr Roland Heguy strongly exposed to Sylvia Pinel the concerns for the future of the companies of CHRD (Cafés, Hotels, Restaurants, Clubs) undergoing a crisis. The profession represents thousands of companies and hundred of thousands of jobs. “With the crisis, companies can’t take any more, they need to breathe. Instead, we are finished off with new taxes: 30 new taxes in 3 years! The State is seen as a collector, controller and manufacturer of standards. Too much taxes kills companies! ”
President Roland Heguy then expressed the expectations of members with the government : enforce rules and fight against illegal trade and unfair competition; put order into the practices of central online booking and moralize contracts: a quarter of the turnover is captured by intermediaries; defend the title of “Maître Restaurateur” and institue that of “Artisan Restaurateur” in 2014 to give a future to those who are cooking “in their cuisines.”

Referring to the hot issue of the rise in VAT from 7 to 10%, scheduled for Jan. 1st, Roland Heguy hammered out:  “Madam Minister, we ask you here to postpone the introduction of the VAT hike. 3% more VAT will be for us the “coup de grace!” Not to reverse this measure is simply suicidal! The government must have the political courage to abandon the VAT increase, now! “.
Roland Heguy thus concluded: “We, the CHRD, represent 60% of the tourist activity in France and 70 % of employment; without us no Tourism in France and Tourism is 7% of GDP. We hope the upcoming Tourism Forum will be the opportunity for the recognition of the economic importance of our industry.”

During her speech, the Minister said in response: “I am ready to work with you, to relay, to analyze your proposals”, ensuring that the government was sensitive to the concerns of the profession but that reforms took time.
She argued that: “We have taken steps to support the competitiveness of enterprises. The government has taken important steps that directly benefit your sector: I think of the Tax Credit for Competitiveness and Employment (CICE), which this year has allowed to reduce the payroll by 4%.”
The Minister, who was booed several times during her speech, has not made an announcement on VAT, implicitly confirming that the rate of VAT would well go from 7 to 10%: “With the President and the Prime Minister, the choice was to maintain an intermediate VAT rate.” she said.
According to Ms. Pinel, the tax credit for competitiveness “helped 90 % of companies in the sector to benefit”, to which it is adapted” she said, before being booed by the audience.
She finally caused a general outcry by saying: “The Government has done more during one a year for your profession than during the last ten years! “

In the afternoon, hundreds of members of UMIH gathered on the famous Palais des Festivals stairs, wearing discontent toques for a souvenir and protestation picture, and then sang “The Marseillaise” to show their anger and worries. 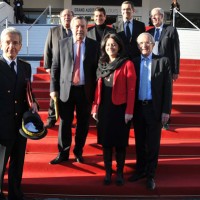 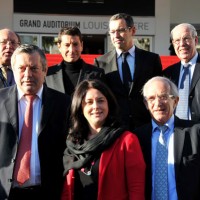 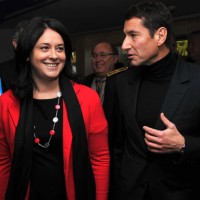 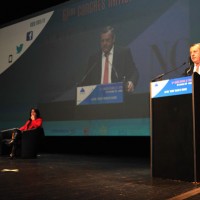 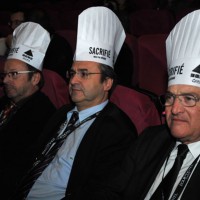 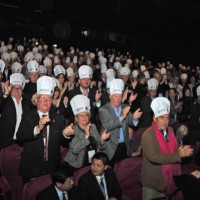 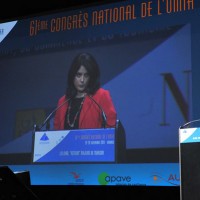 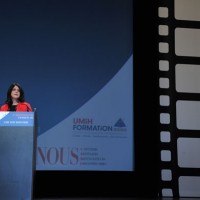 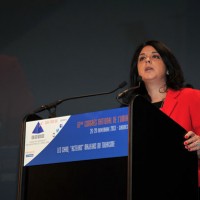 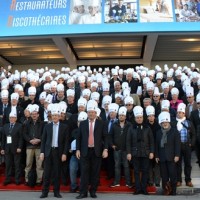