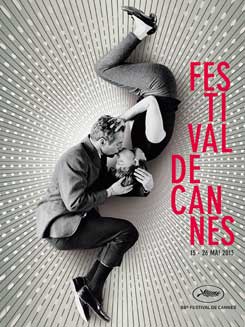 To grace the poster for its 66th edition, the Festival de Cannes 2013 has chosen a couple who embodies the spirit of cinema like no other: Joanne Woodward and Paul Newman. They were photographed during the shooting of the aptly named “A New Kind of Love”, by Melville Shavelson (1963).

For the Festival de Cannes 2013, it is a chance both to pay tribute to the memory of Paul Newman, who passed away in 2008, and to mark its undying admiration for Joanne Woodward, his wife and most favoured co-star. They were honoured at the Festival de Cannes in 1958 – the year of their marriage – with the selection In Competition of Martin Ritt’s The Long Hot Summer, the first film in which they appeared together. (Via Festival de Cannes)