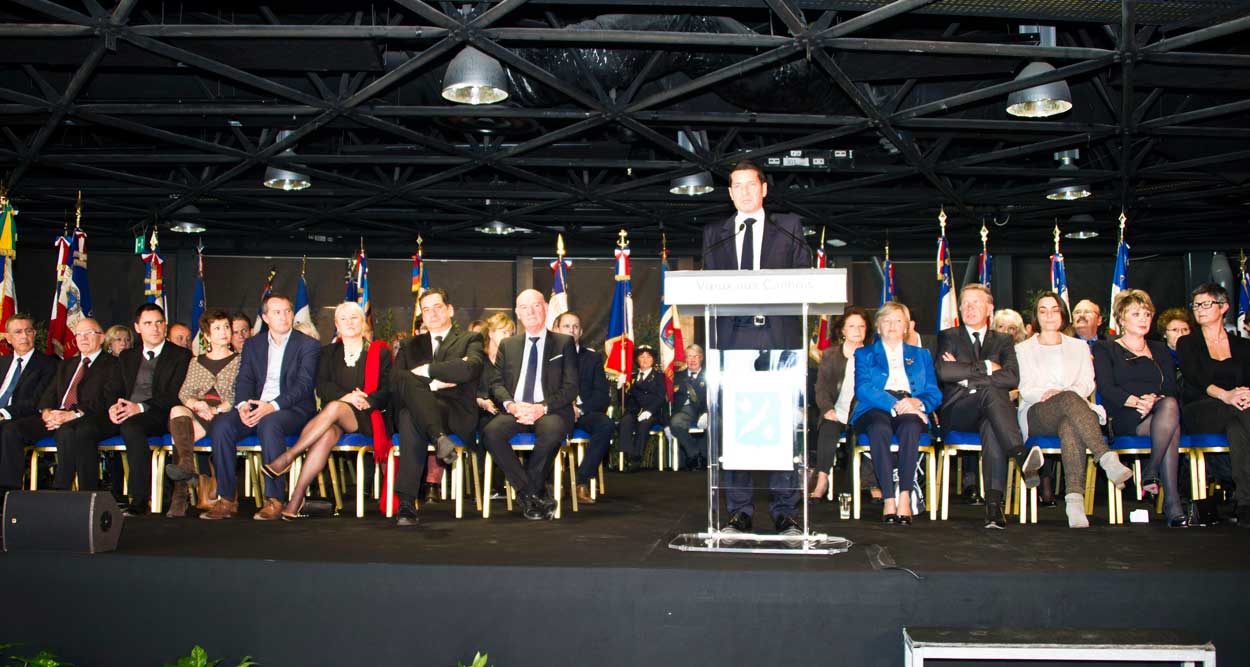 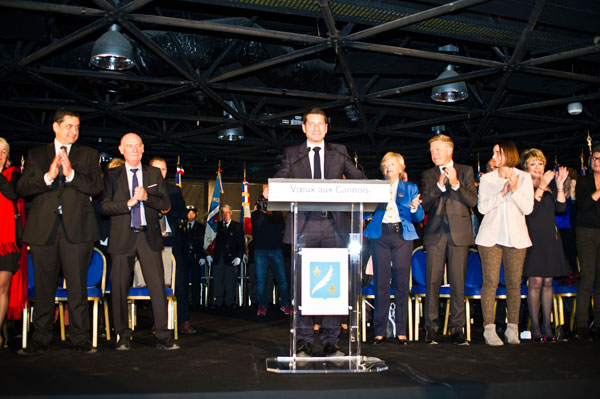 David Lisnard and his Municipal Council

David Lisnard, Mayor of Cannes, expressed his wishes in front of more than 2,000 Cannois at the Palais des Festivals, exalting France’s values in opening.

Record attendance on January 17, 2015, for the first New Year wishes by David Lisnard, Mayor of Cannes and Vice-president of the General Council, Delegate for Tourism, surrounded by the City Council and flag bearers in a fully-packed Espace Riviera at the Palais des Festivals.

As a prelude to the Mayor’s wishes, the Cannois were thrilled by the clip Happy in Cannes, created by Cannes artists.

A passion for Cannes

In an inspiring speech, the Mayor of Cannes, who describes himself as “a Cannois mandated by you“, gave his vision for the future of Cannes, a city he loves passionately, he has “in his guts” and mobilized the Cannois on tomorrow’s challenges. 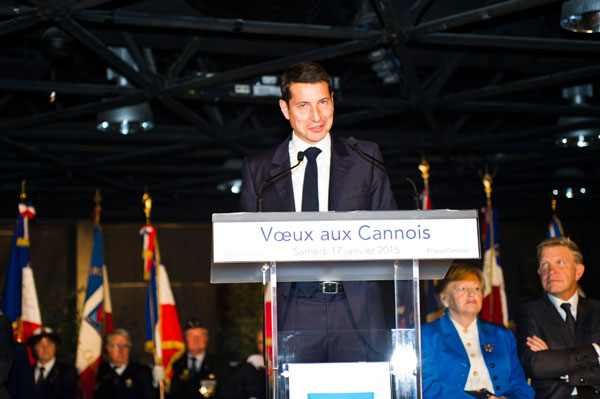 The health of the peoples is peace

David Lisnard first said: “We are in a year of duty. The Republic needs us!” and added:”I wish the world a good democratic health, a good Republican health. The health of the peoples is peace!“

Tribute to the victims of terrorism

Recalling the dark days France has just experienced, David Lisnard asked for a minute of silence in memory of the 17 people murdered by the jihadist barbarity and Hervé Gourdel, whose body has recently been found.
About the attacks against Charlie Hebdo, he said: “If some kill because of cartoons, then we must brandish the cartoons in defense of freedom of speech.” And he added: “Never since the Liberation, France had so gathered around its values.” 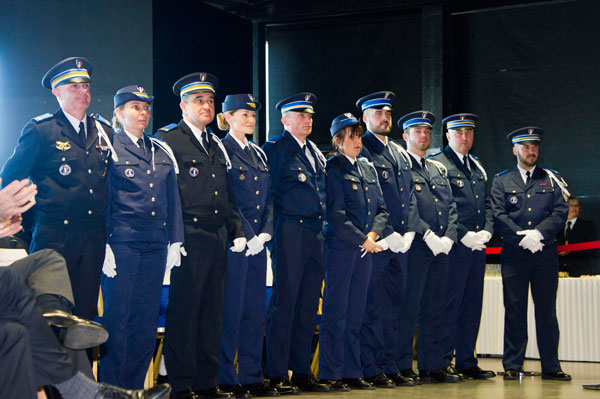 Reinstatement of the national service

To enhance the youth’s republican sense and patriotism, David Lisnard calls for “a reinstatement of the national service, in a new form, for a period of six months, supervised by the military, a training to citizenship, respect for the flag and values of the Republic.”

David Lisnard recalled the poor state of the economy of France, who lost his 5th place in the world for the benefit of the UK: “Our companies and entrepreneurs are the most siphoned up in the OECD! 28 billion Euros will be taken from the cities’ budgets between 2014 and 2017…“ 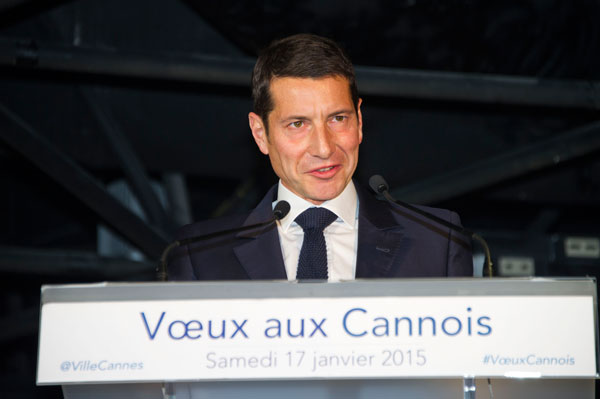 Facing 2015 issues with a smile

David Lisnard listed the main challenges facing the City of Cannes and his projects, mobilizing the Cannois around the 2015 issues:

– complete the municipal budget while “digesting” the growing demands of the state and sustainably protect Cannes taxpayers: “41 million Euros will be taken from Cannes budget. Yet, the Mayor promised: “No increase in the tax rate, today and tomorrow!”
David Lisnard recalled the progress made in canteens: “Homemade starter, main course and dessert with fresh products for 2.8 euros only in our schools.”
– improve public transport (free bus for teens to avoid using two-wheelers), the parking, the quality of life in neighborhoods: “We are launching the work to achieve Boccabana for people to be able to walk and jog by the sea.” The mayor also promised a Salle des Fêtes in La Bocca.
– embellishment of the upper Republique sector, beautification of Le Suquet,
– construction the University Campus, of the new school of Les Broussailles, of a new crib: “In 2014, we opened the Bastide Rouge, 30 jobs have already been created!”
– improve the town hall daily operation, fight against waste: “An electric bike service was implemented.”
– fight against incivility and always better protect the Cannois and visitors: “We need the citizen mobilization to win the battle against incivility”!
– encourage citizen vocations in the city, support young people, foster entrepreneurial risk, promote a collective and positive momentum,
– continue to revitalize Cannes, embellish the city and preserve its soul, taking into account the new financial constraints.

David Lisnard faces these challenges with enthusiasm, as, according to him: “Living is serving, and serving is living!“ 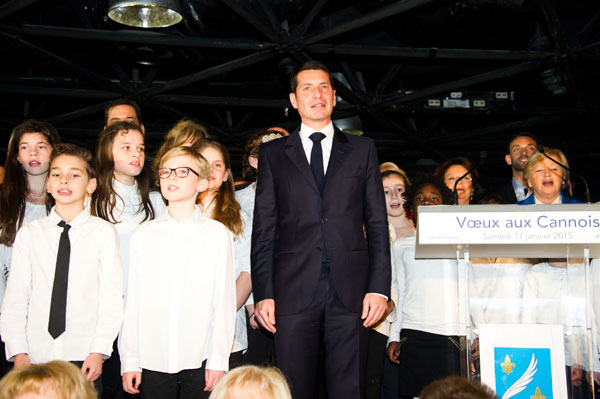 A choir of children to sing La Marseillaise

In conclusion, David Lisnard said: “We are entering a year of doubt, difficult but hopeful. Let’s assume our identity, let’s be proud to be Cannois, Provençaux, French! Long live Cannes, long live the Republic and long live France!”

A choir of 80 children dressed in white accompanied the Mayor of Cannes in singing La Marseillaise a cappella. 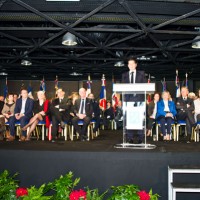 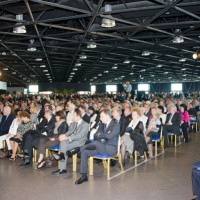 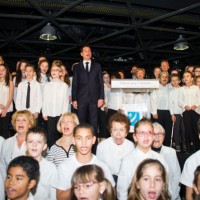