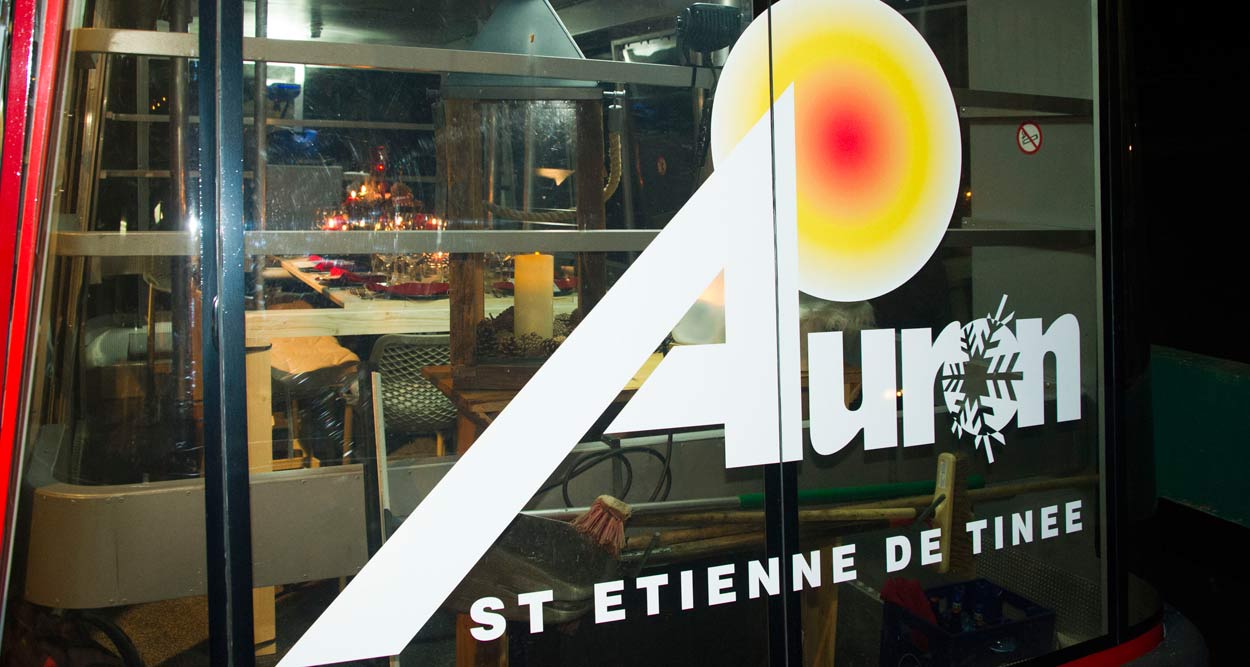 Chefs au Sommet d’Auron sacred the iconic ski resort in Mercantour as the Capital of the Haute Cuisine by a dinner at 2000 m of altitude in the cable car.

Chefs au Sommet d’Auron inaugurated a unique gourmet adventure: 12 guests enjoyed a chefs’ dinner hung in the sky at 2000 m. The chef Jacques Rolancy, Meilleur Ouvrier de France and pastry chef Bruno Laffargue won the challenge of achieving a gastronomic meal whose dishes – prepared under the snowflakes – were tasted in the Las Donnas cable car cabin between 1600 to 2000 m.

Conviviality aboard the cabin

After the glass of champagne on the cable car platform of the station in Auron at 1600 meters above sea level in the company of Colette Fabron, Mayor of Auron, departure to the summit of Las Donnas at 2 000m above sea level for the première of high altitude dinners.
Together in the ephemeral restaurant, around the festive table laid in the cabin of the cable car and superbly dressed by Dec’Auron, 12 guests let themselves be won over by the excitement of the departure.
The amuse-bouche is served as the cable begins its climb to the peaks: a Lobster Bisque flavored with coriander and tarragon with delicious chunks of lobster. This sumptuous velouté with a lot of character, a regular of high-end tables, is giving the tone quality of the meal!

The challenge of serving warm dishes

With comments from Michel Guillot and Jean-Max Haussy, from the Merchants Association, we find again the Lobster in the starter: Carpaccio of St Jacques, Lobster and Mango with Vinaigrette of Passion Fruit. The delicate and marine flesh of the delicious seafood is enhanced by the fresh notes of Passion Fruit and its seeds that provide a touch of crunch in the mouth.
The hot dish is a Supreme of farm Guinea Fowl, roasted in its juice with Tartine of truffled Rillons and onctuous mashed Ratte. Serving a hot meal at this altitude is a true challenge!
The sumptous dessert by Bruno Laffargue was a Safraned Pear on a Gianduja Macaroon and Orange Cream.

Among the guests were Marie-Laure Baum, the winner of the Cuisine Contest at Chefs au Sommet d’Auron on the theme of “La Tourte De Blea” (Chard pie) and her American husband, Desmond. Marie-Laure’s Chard Pie has won her the first prize in amusing circumstances: the cook, although she strictly followed the recipe, taken from the City of Nice website, missed her pie! Right out of the oven, the pie was more looking like the Mercantour’s chain of summits rather than the Plaine du Var, where the chard is cultivated. Not discouraged by this twist of fate, Marie-Laure boldly presented her rugged pie adorned with a small sign reading: “I am not beautiful but I’m delicious. Sometimes you have to go beyond appearances…” This trait of humor or the sublime perfume that emanated from it has seduced the jury.
Mrs. Francine Lyrans and Mr. Jacques Groues, winners of the France Bleu Azur culinary quiz, have also been traveling towards the gastronomic peaks.

Towards the peaks of gourmande felicity

The happy gourmets of this initiatory excursion were delighted to take off from the earth to enjoy a meal in the sky, surrounded by the magnificent snow-capped mountains of Mercantour. The stars shone in the plates and in the eyes of the guests who participated in this gastronomic première, a remote fairytale journey to the heights of gourmande felicity.

Great chefs at the top of their art

The French gastronomic tradition is alive in Jacques Rolancy’s family: his mother was the first woman Meilleur Ouvrier de France in 1982! The chef practices his art in two restaurants in Nice: the Rolancy’s and Le Bistrot des Vivers.
The pastry chef Bruno Laffargue has seduced customers in luxury hotels in Paris and London and Ireland, Dubai, Qatar, Australia. After traveling to the 4 corners of the world, he returned to France in 2009 to create Mic Mac Macarons in Cagnes sur Mer.

Les Chefs au Sommet d’Auron is the Festival of Mountain Gastronomy. For the fifth consecutive year, during a weekend, the chefs offered gastronomic dinners at special prices (appetizer, starter, main course and dessert) in restaurants of Auron, Saint Etienne de Tinée and, this year, in Saint Dalmas le Selvage.
The Festival also offers culinary events and pastry workshops by the Union des Pâtissiers, Chocolatiers et Glaciers of the Maritime Alps.
The event reflects all what the hinterland of Nice and the Mercantour offer with generosity, in addition to the splendid landscapes of mountains: authenticity, conviviality and sharing. Some values the chefs are sensitive to because they provide them daily. This is why a team of loyal starred and renowned chefs come to celebrate gastronomy in the magnificent setting of the Mercantour’s snowy mountains to delight the taste buds of gourmets and vacationers on ski slopes.