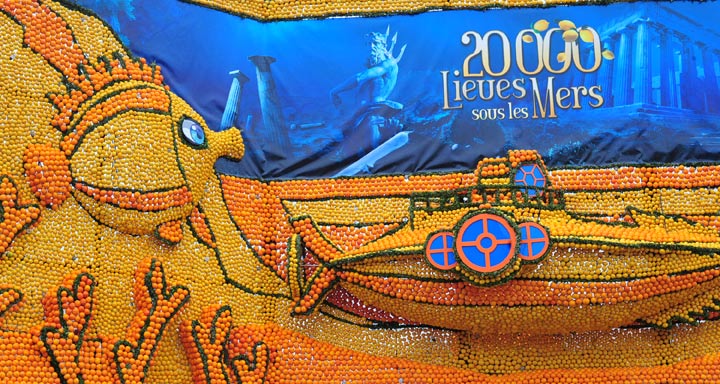 The Fete du Citron 20,000 Leagues Under the Sea

The 81st Fete du Citron plunges from February 15 to March 5, 2014 into the oceans on board the Nautilus that will take us live exciting adventures 20,000 leagues under the sea.

From February 15 to March 5, 2014, the Fete du Citron submerges visitors into the world of Jules Verne’s «20,000 Leagues Under the Sea». The corsi of floats manufactured in citrus, oranges and lemons, will take us on the Nautilus, to meet Captain Nemo and some fabulous sea creatures.
In the novel «20,000 Leagues Under the Sea», a scientist at the Museum of Natural History in Paris, Professor Aronnax, embarks on the Abraham Lincoln, with his faithful servant, Conseil, to find a monstrous beast that made headlines across the oceans. The sea monster is Captain Nemo’s submarine, the Nautilus, who takes them into thrilling adventures.
The narwhals, the whale, the giant squid and other sea creatures seize the Biovès Gardens and reveal their mystery in the spotlights of Gardens of Light. Stilt-walkers, musicians, comedians, acrobats will animate the corsi day and night.

The Fete du Citron 2014 pays tribute to Maud Fontenoy, the courageous explorer of modern times, for its action within its Foundation. After, rowing, solo and unassisted, across the Atlantic in 2003 and the Pacific in 2005, Maud Fontenoy was the first to sail around the world against prevailing currents in 2007.
She calls at Menton to be the Godmother of the event. Maud Fontenoy embodies the commitment to the protection of the oceans: she is spokeswoman for UNESCO ‘s Intergovernmental Oceanographic Commission and the World Ocean Network. John Lemon, mascot of the event, will accompany the icon of biodiversity.

The Fete du Citron was born from a simple citrus exposition founded in 1933, in a country with a privileged climate allowing the cultivation of a fragrant lemon, appreciated worldwide. It has become a world-class event that brings together some 160 000 visitors.
A few figures: 100 tons of citrus for the gardens – 30 tonnes for the floats – 10 tonnes to change damaged fruit. It takes 30 pounds of fruit to cover 1m2.

To better immerse themselves in the Festival, visitors can benefit of packages with and without accommodations are offered to fans of the Fete du Citron.