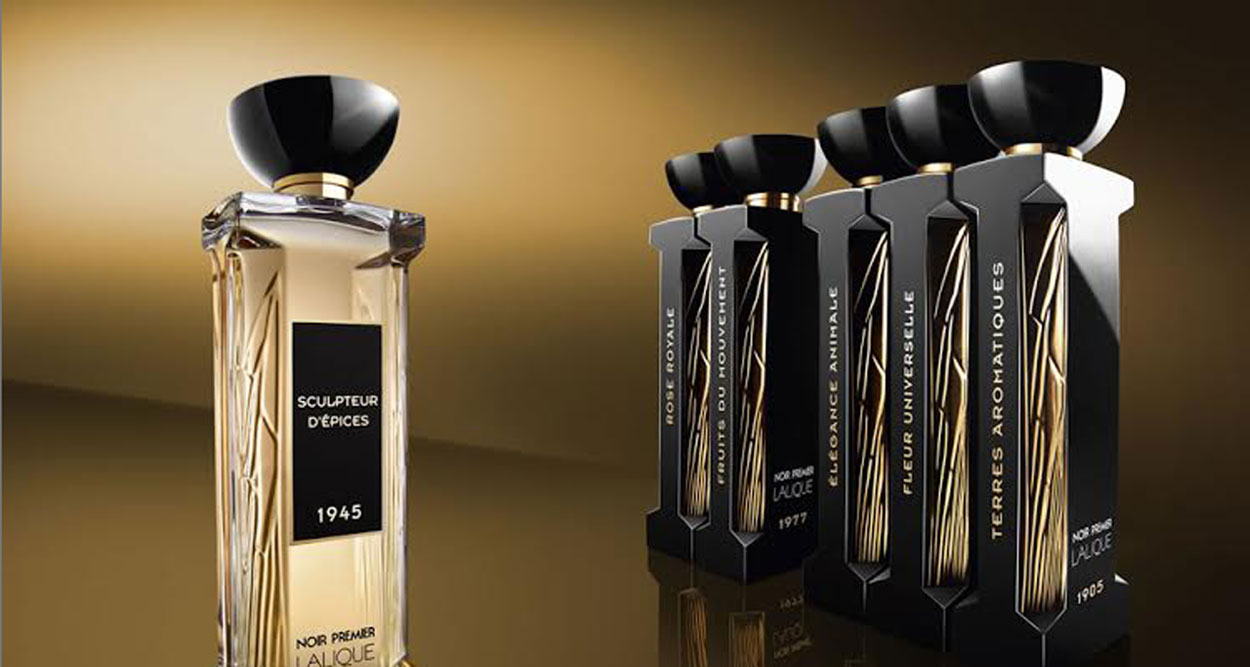 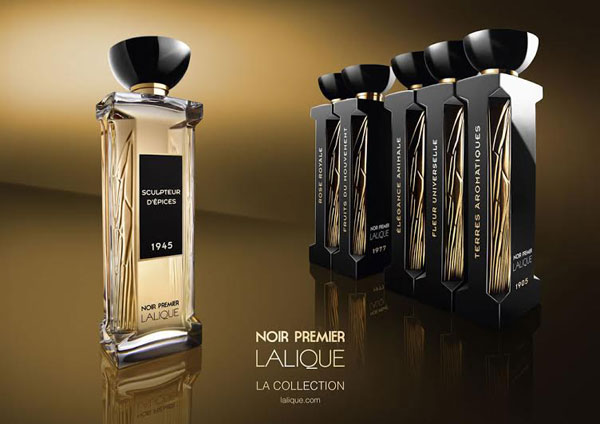 The perfume house Art and Fragrance launched Noir Premier, a collection of six outstanding fragrances celebrating the milestones of the prestigious house Lalique, seen as the worldwide ultimate symbol of luxury.

The great perfume house Lalique created in 2014 the Noir Premier range, positioned between the collection of art objects and the range of Lalique perfumes. The five creations composing this new collection pays tribute to the great milestones in the history of the brand. Thus, each is associated with a perfume year written on the bottle. The raw materials honored in the Lalique Noir Premier are rose, thyme, everlasting, leather and prune.

René Lalique, a glass artist and exceptional master of transparency, has become famous in the world of perfumery since 1900. Following a meeting with the perfumer François Coty, the two designers will revolutionize the world of perfume by designing original bottles. Since 1992, date of creation of Lalique Perfume, the company has created fragrances and limited edition of collectible and numbered crystal bottles. Its name is attached to creativity and quality.

At the peak of his career as a jeweler, René Lalique is exploring a new form of expression: the glass and crystal. The everlasting flower, around which was designed fragrance, boasts the special feature of never fading. It symbolizes here Lalique’s perpetual quest for aesthetics and passion for renewal. The sweet notes of the immortal are associated with rum, myrrh, cinnamon, patchouli and a sparkling-spicy note of cardamom.

The perfumer François Coty believes that each of his creations deserves a unique bottle and René Lalique finds a way to produce luxury bottles in large quantities. Thus was born the modern perfumery. A nod to François Coty’s Corsican origins, the star ingredient here is the thyme. Julie Massé added lemon, pineapple, lavender, vetiver and tonka bean. An elegant aromatic-woody composition. 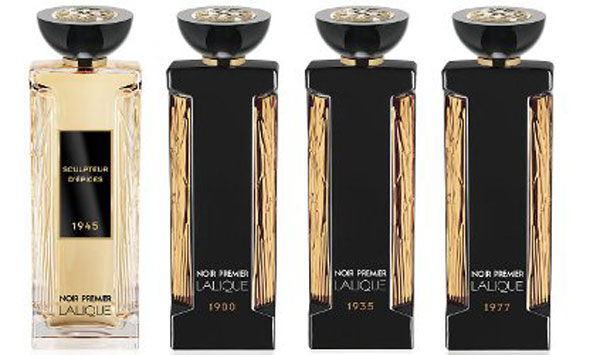 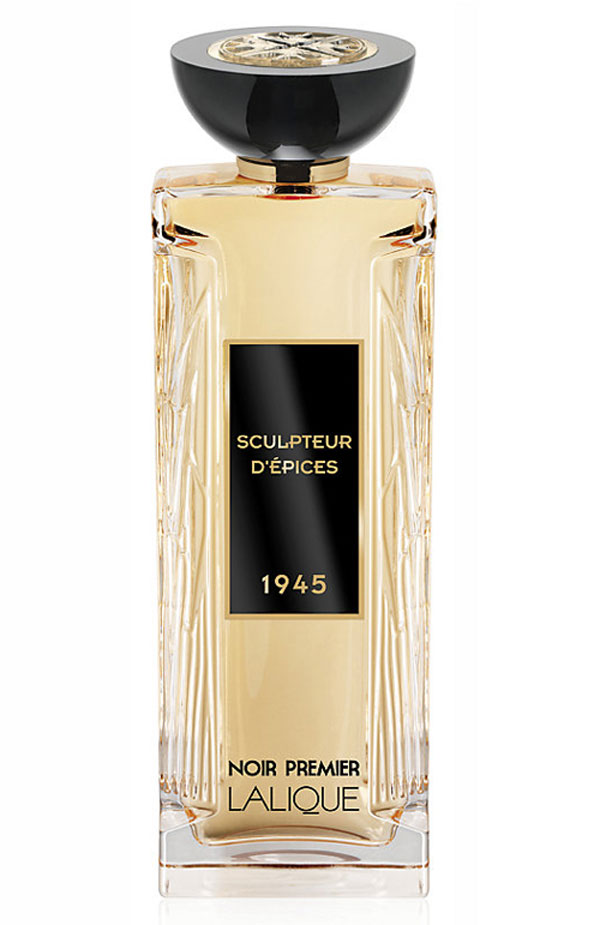 Marc Lalique succeeded his father and turned to the art of designing crystal in 1945. Marc’s innovations became the symbol of the house of Lalique: the contrast between transparency and satin finish known as Sculpteur d’Epices. The composition opens with sparkling bergamot, black pepper and orange, upon a heart of rose absolute, cinnamon and Egyptian jasmine absolute. The base offers warmer notes of of tonka, patchouli and labdanum.

Marie-Claude Lalique, René’s daughter, took the head of the house. As she used to often inspire from living models, the bottle is named after her love of movements. The legend says Marie-Claude bought a dove for the realization of one of her creations.
Built around the prune, the fragrance also includes black pepper, mandarin, jasmine on a more oriental base of amber and sandalwood.

Marie-Claude Lalique created the Zeila panther, one of his most famous works. A smell of leather mixed with saffron, peach, rose, gurjum balsam and sandalwood. Through its leather and amber, the animal and oriental fragrance will appeal to fans of perfumes of Arab inspiration. 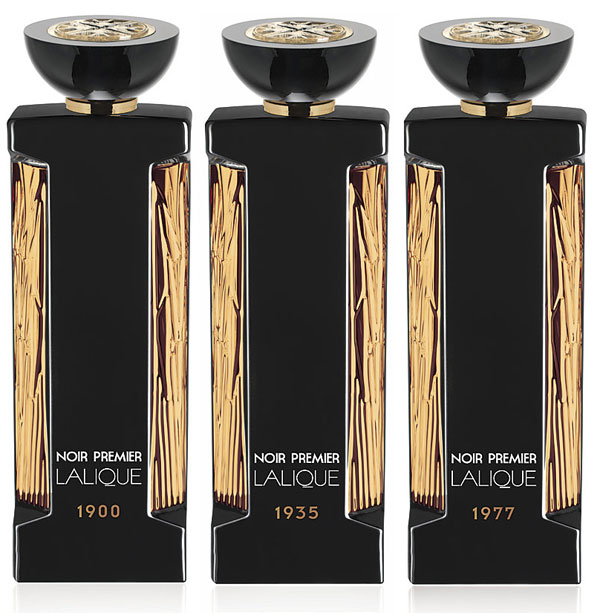 The heritage collection of fragrances is contained in symbolic bottles: the very first black perfume bottle designed by René Lalique in 1911, the Quatre Aigles. The name of the fragrance is written in gold letters on the bottle whose edges are adorned with four finely sculpted female figures.