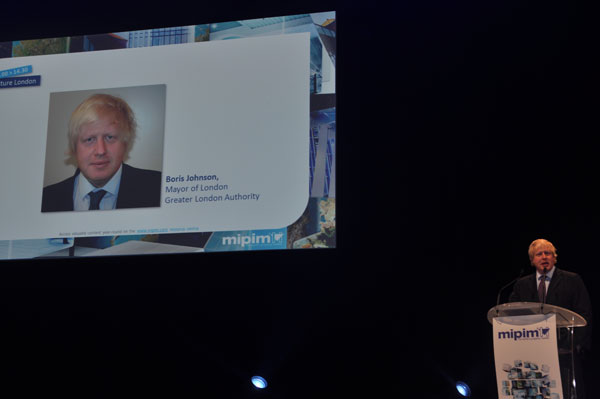 For the fourth time, the Mayor of London Boris Johnson has returned to MIPIM for a flagship keynote on March 12 at the Grand Auditorium of the Palais des Festivals in Cannes. The iconic leader of the City of London outlined his vision on the development of the city and the challenges and opportunities after the Olympic Games which were held in the capital for 19 days. 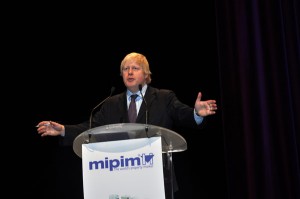 During a colorful speech, Boris Johnson has challenged investors to come forward spectacular designs for the ambitious project of English floating village on a site of six hectares located on the Royal Victoria Dock, with floating homes, hotels and restaurants. Boris Johnson also announced the creation of one of the many villages of the Queen Elizabeth Olympic Park, named in honor of the Queen, which will to lend a new dimension to East London with the construction of 800 houses between the velodrome and Olympic Village. The construction of this area is scheduled for completion in July 2013. “This project is one of many opportunities that are issued by our beautiful town,” he enthused, in his speech, and when you know his strong character coupled with tremendous energy we can not doubt the success of all these beautiful projects, as both his investment and hunger for success are great.

He then detailed the the completion of the construction of the Olympic Stadium, which will actually be a large stage more in the agglomeration after Wembley (for football), Twickenham (for rugby) and Emirates (where Arsenal plays). The Olympic Park and its surroundings, located in the north-east suburbs of the British capital, has allowed, thanks to this unique event in the world, to be used by the city and state to spearhead the rehabilitation of a popular urban zone ignored by operations in recent years. Boris Johnson presented several other projects of the city, including the Project One Nine Elms, two residential towers that will occupy a prime location on the banks of London in the heart of a new set of towers in Vauxhall and Sixty London, a building project with 19,510 sqm of office space undertaken by AXA Real Estate on Holborn Viaduct, on the western edge of London. Among the major projects of the City of London, the mayor has also referred to the Earls Court Project by Capital and Counties in West London. The mayor also recalled with pride that today, London had surpassed Hong Kong with the title of “most expensive office in the world” according to a study by Cushman and Wakefield.