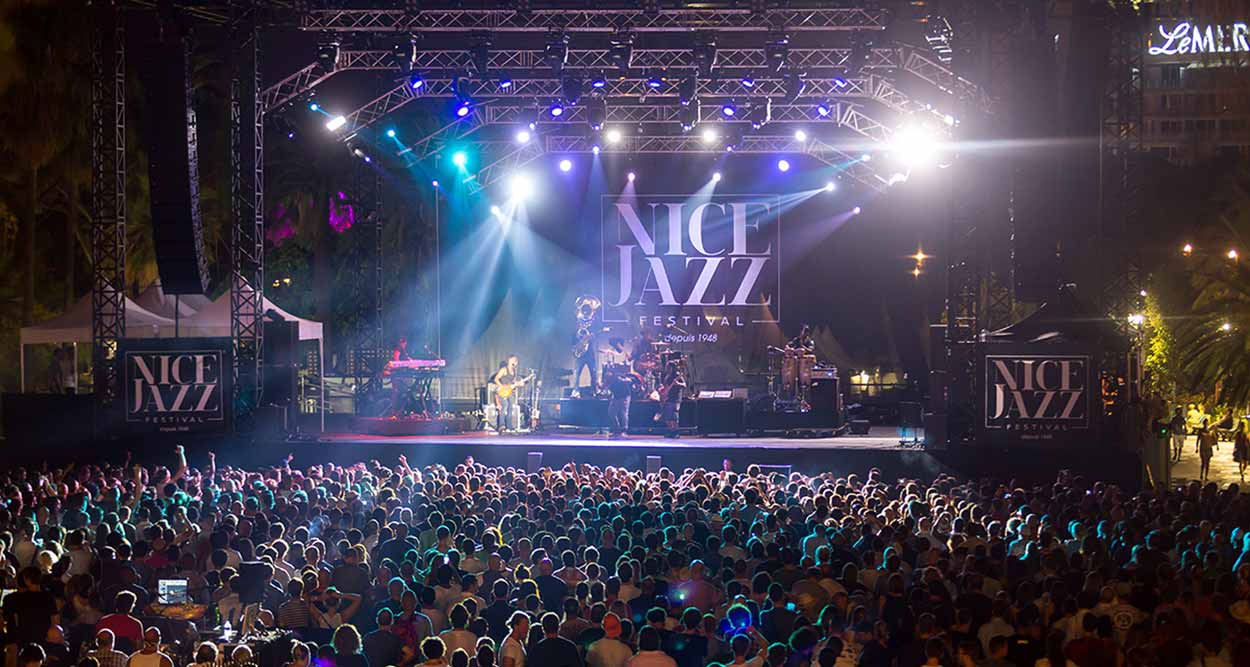 The Nice Jazz Festival has again offered a magical evening and a vibrant programming on July 10, always of the highest quality for Jazz, Blues and Soul aficionados. 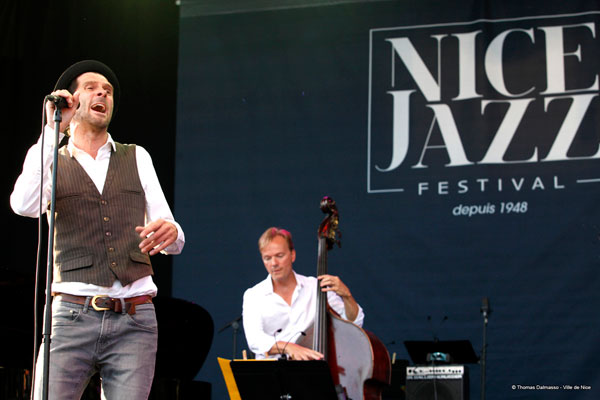 The evening started at Théâtre de Verdure with Hugh Coltman. The British singer and guitarist paid a moving tribute to the great American jazz musician Nat King Cole by diving into the repertoire of one of the archetypes crooner in the 1950s. Accompanied by prestigious jazzmen Thomas Bramerie on bass and Louis Winsberg on the guitar and Gael Rakotondrobe on the piano (very impressive when he took a beautiful chorus on the standard Nature Boy).
Hugh Cloltman, whose first two albums were very successful in France where he settled ten years ago, will sign his discographic return with a tribute album Shadows – Songs of Nat King Cole, to be released on August 28 next. Hugh Cloltman, the emotion in the raw state never ceases to seduce all those who have the chance to listen to him performing the songs about the two major influences in his life: his mother and Nat King Cole. 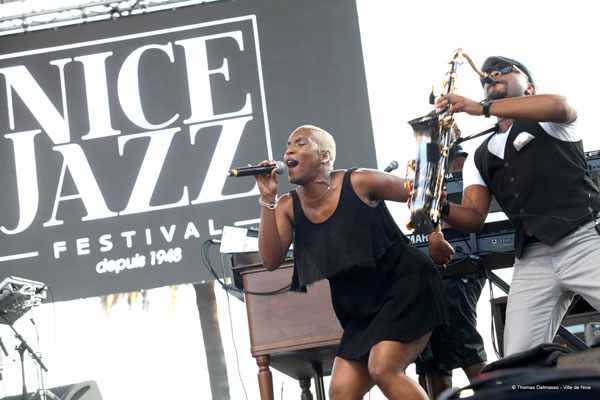 Liv Warfield on the Massena Stage

It is a whirlwind of energy and voice that broke over the Massena Stage when Liv Warfield interpreted her second album with accents of Rock and Gospel. A former Prince and B.B. King‘s chorister, Liv Warfield’s infectious energy in her musical prowess was accompanied with an organ, a brass band in the tradition of the Memphis Sound and an amazing guitarist, Ryan Waters. With her breathtaking cover of Al Green‘s song Love and Hapiness, with whom she worked, Liv Warfield literally bluffed the Nice Jazz Festival public.
During her career, Liv Warfield has collaborated with artists such as Al Green, BB King, Dave Matthews Band or The Roots. Prince took the artist under his wing, first by choosing her as a chorister and then by co-writing her new album. 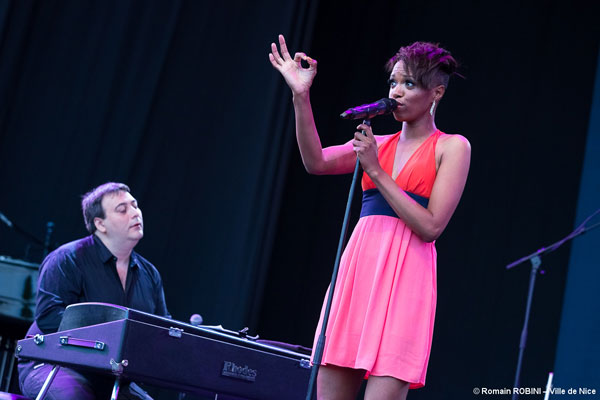 At the Théâtre de Verdure, the Belgian pianist Eric Legnini and his group What I’d Say feat. Sandra Nkaké & Kellylee Evans, paid a tribute to Ray Charles. It was a real pleasure to listen to this wave of Soul and Groove. The bright brass, Daniel Romeo‘s bass, Franck Agulhon‘s drums and Eric Legnini’s funky chorus echoed the sublime and true stage animal Sandra Nkaké, the super sexy black panther with a powerful and full-of-soul voice and Kellylee Evans who wowed the thirsty for party and swing. The dancers then unleashed on Ray Charles’ hit What I’d Say that Hugh Coltman joined for a real musical earthquake. On that night, Eric Legnini, surrounded by voices and brass, paid tribute to a joyful Ray Charles. 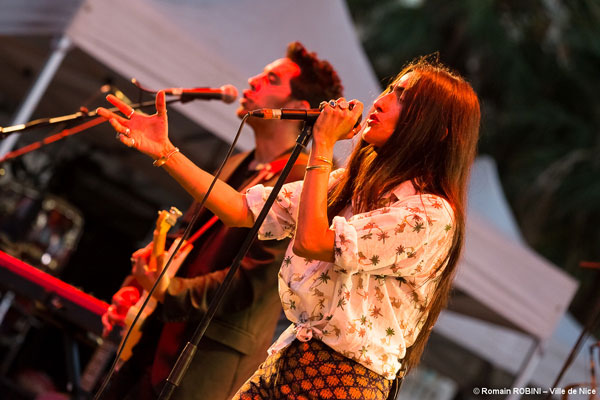 Hindi Zahra on the Massena Stage

Immediate takeoff on Massena Stage with the Moroccan singer Hindi Zahra. Descendant of a long line of Berber and Tuareg musicians, her first album was awarded the Prix Constantin and that of the World Music award at Victoire Musique in 2010. Hindi Zahra has been distilling for nearly 10 years a colorful music without borders. It is between traditional music and nowadays sounds that she resolutely took the crowd massed on the lawns of the Jardin Albert 1er away for a colorful and exotic travel. The artist, designated as the successor to Billie Holiday by the British magazine The Wire, finally returns to the stage, and what a stage, since it is that of Nice Jazz Festival to premiere her new album, deeply rooted in the Jazz she loves, for which she is famous and suits her so well. 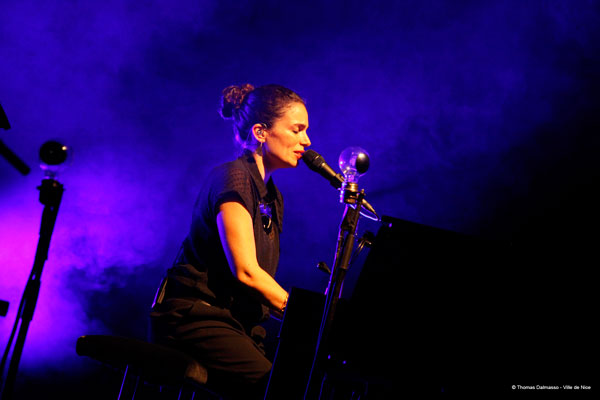 A moment of pure joy in the fully packed Théâtre de Verdure stands to welcome Yael Naim, an artist who won two Victoires de la Musique. With her melodious and melancholic voice, the singer sometimes concentrated, sometimes electrifying, had put in her musical program a mixture of feminine new soul. Yael Naim on vocals and piano was accompanied by pianist David Donatien, her long-lasting partner, Daniel Romeo on bass and three choristers. The beauty with long black hair who presented her new album Older, already acclaimed by critics, has again demonstrated through her quality performance that she well mastered all musical genres. Intensely emotional with her cover of Toxic or lyric with Coward, Yael Naim signed through her first three albums a few planetary hits, including the hit New Soul (in France, the song remained No. 1 in sales for 14 consecutive weeks ), used by Apple in one of its ads. 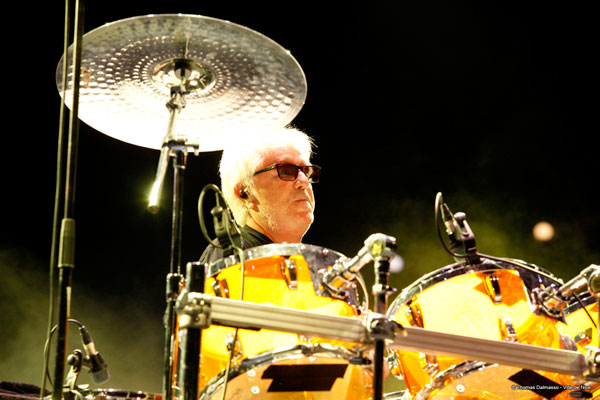 Cerrone on the Massena Stage

Around 23h, a big leap backwards was offered to nostalgics of the sixties on the Massena Stage with the emblematic figure of made-in-France disco, French DJ Marc Cerrone.
The artist, author of hits like Give Me Love, Supernature or Love in C Minor, who sold 30 million albums in his career, has shown us that even at his age, he still held the keys to success. Cerrone took part in legendary feasts such as the Dance Party Live at Versailles, the Los Angeles Millenium Celebration or the concert in Paris, Place de la Concorde, to celebrate the bicentenary of the Revolution.
The singer whose Cerrone best friend was Nile Rodgers, won a Grammy Award and a Golden Globe, began his career as Artistic Director of a famous chain of resorts, then as drummer in a Rock band before becoming the great DJ with an international career that we know today. It is a “best in show and dance” who closed this musical evening and the Massena Stage will remember it !