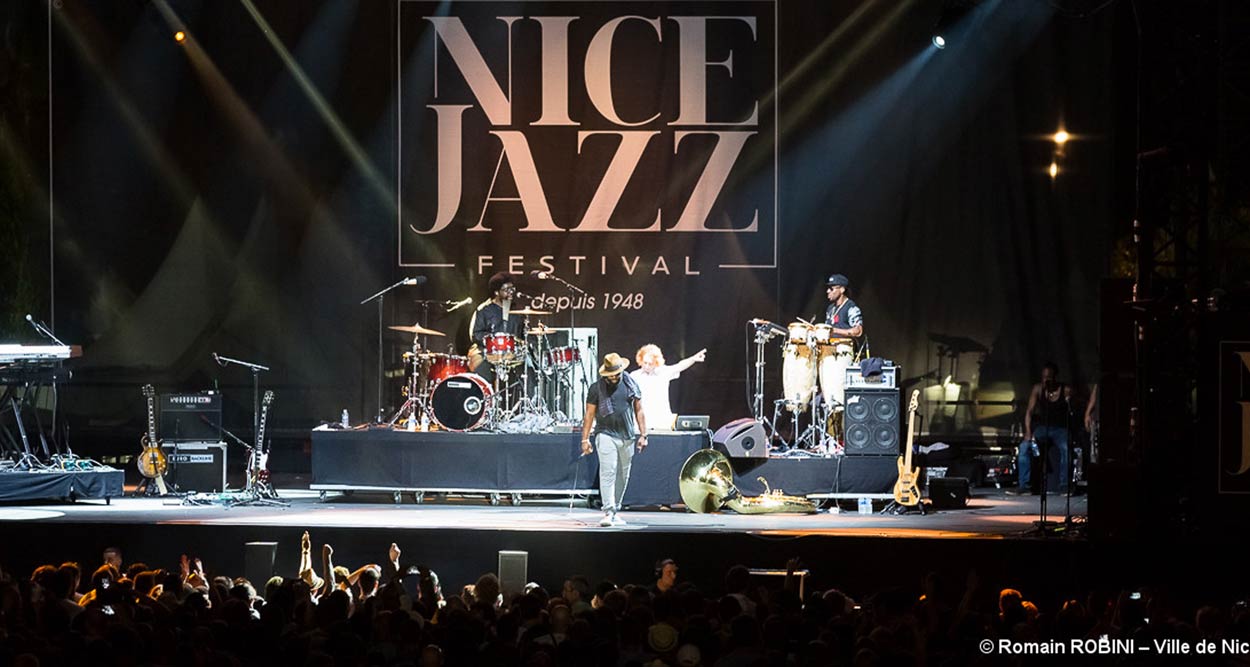 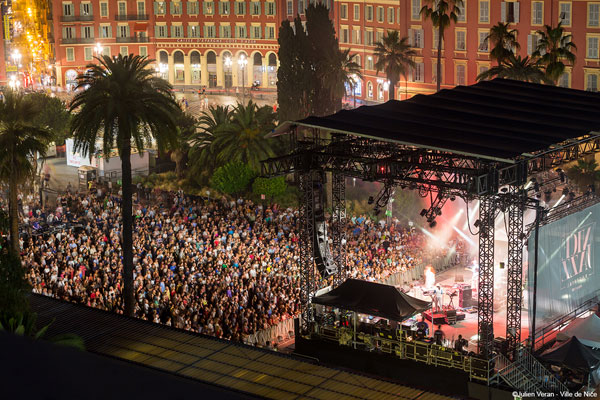 Nice Jazz Festival offered an exceptional artists line-up on July 11, including the Rap band The Roots, straight out of the New York TV sets.

The young Barcelona singer and trumpeter Andrea Motis, aged barely 20, opened the stage at Théâtre de Verdure in the late afternoon of the penultimate day of the Nice Jazz Festival. Massed in the stands, the public had the pleasure of listening to the beautiful voice of the youngest in the Festival interpret covers of the repertoire of the Great American Songbook, Brazilian Bossa or French songs, accompanied by his mentor Joan Chamoro. A pretty face and an incredible talent for this composer, author, singer who has already seduced the music greatest such as Quincy Jones. Andrea Motis’ brilliant trumpet playing directly went into the hearts of the spectators with her amazing talent.

Around 20h, the Californians of Monophonics invaded the Massena Stage. The Monophonics, a formation from San Francisco and its harpsichordist-singer Kelly Finnigan, who had already appeared at the Nice Jazz Festival to accompany Ben L’Oncle Soul, went wild for an hour to the sound of a psychedelic and energetic Soul. A stunning concert which saw a sweaty, exhausted but happy Kelly Finnigan salute a conquered audience. 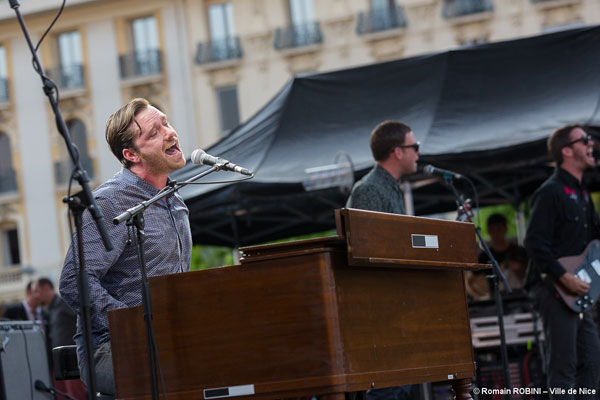 It’s under the form of a Grosse Tête of the Carnaval de Nice that Jason Moran, the gifted pianist and major figure of the 21st century Blu Note, took to the Théâtre de Verdure stage to interpret contemporary compositions and improvisations mixed with Latin Jazz.
With his back and forth trips on the stage and his very danceable rhythms performed as a tribute to pianist composer Fats Waller, Jason Moran made lots of spectators sway. Trumpeter Leron Thomas‘ breathtaking performance when singing The Sleepy People and the duet with Charles Haynes on The Joint Is Jupin, were the highlight of a final full of panache and virtuosity. 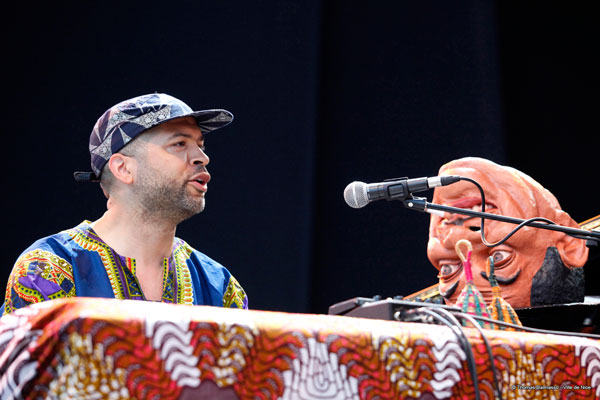 In front of a stunned crowd, Larry Graham, the legende of Funk, went across the audience, dressed all in white, to quietly go and settle on the Massena Stage. At over 70, the inventor of Slap in Sly & The Family Stone and Prince‘s friend and favorite musician, has lost none of his Groovy verve. Accompanied by his group Graham Central Station, the bass player ignited the Festival with an irresistible Funk which made young and old rock from head to toe in the Nice Jazz Festival audience. 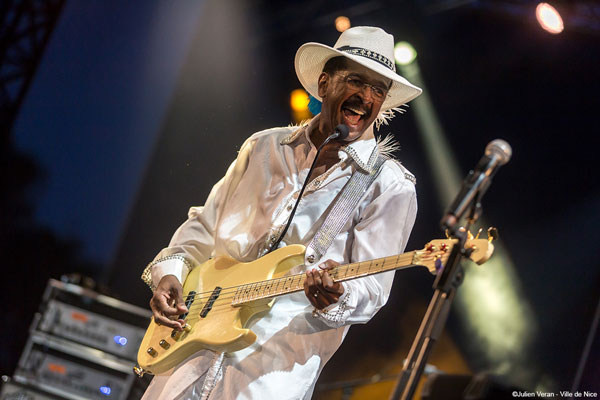 At the Théâtre de Verdure, time to transatlantic meeting between Cuban pianist Roberto Fonceca‘s Latin Jazz and singer Fatoumata Diawara‘s Malian Rock. A partition played with four hands, mixing modern Jazz and African music. The duo was accompanied by a N’goni player, a singer, a bass and drums for the African atmosphere and a piano for Jazz.
The singer Fatoumata Diawara gave a show advocating for the African youth confronted with the ethnic and geographic convulsions of a continent plagued by poverty and wars, and their envy of elsewhere for a better future. For the Cuban pianist, it was a beautiful reminder of his links with the Yoruba culture and Santeria, the syncretic cult inherited from African slaves. 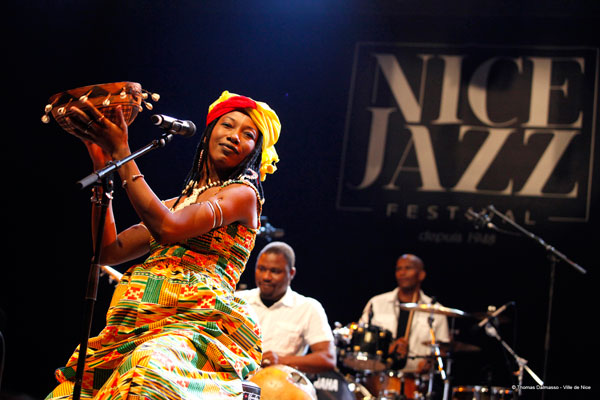 The Roots on Massena Stage

For the last concert of the evening – also the most anticipated – the rap group The Roots appeared on the Massena Stage at 23h30 before a cheering crowd. As a matter of fact, this iconic group of the Philadelphia hip hop scene had chosen the Nice Jazz Festival stage for their only European date this summer. The group made rare appearances since it recorded the Late Night Show, the most watched in the USA, with Jimmy Fellon. The group, composed of 7 musicians with enormous talent, around the founder of the group, Questlove on drums, takes its inspiration both from Funk, Soul and Jazz. They made a dazzling demonstration before a more and more hysterical crowd as they chained titles like Dynamite, or How I Get Over and The Seeds 2.0 to the delight of their worshipers. A dazzling finish set ablaze the Riviera night until late and the concert ended in a standing ovation for the group. 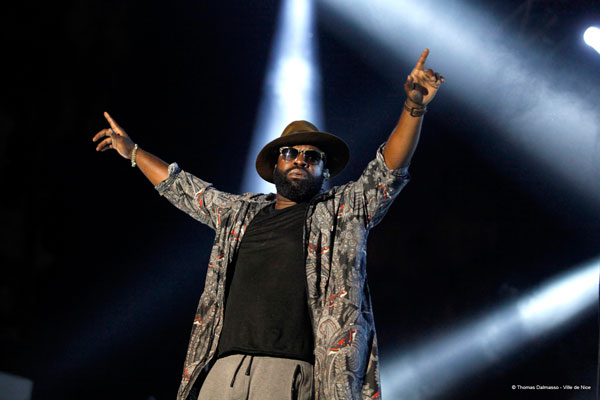