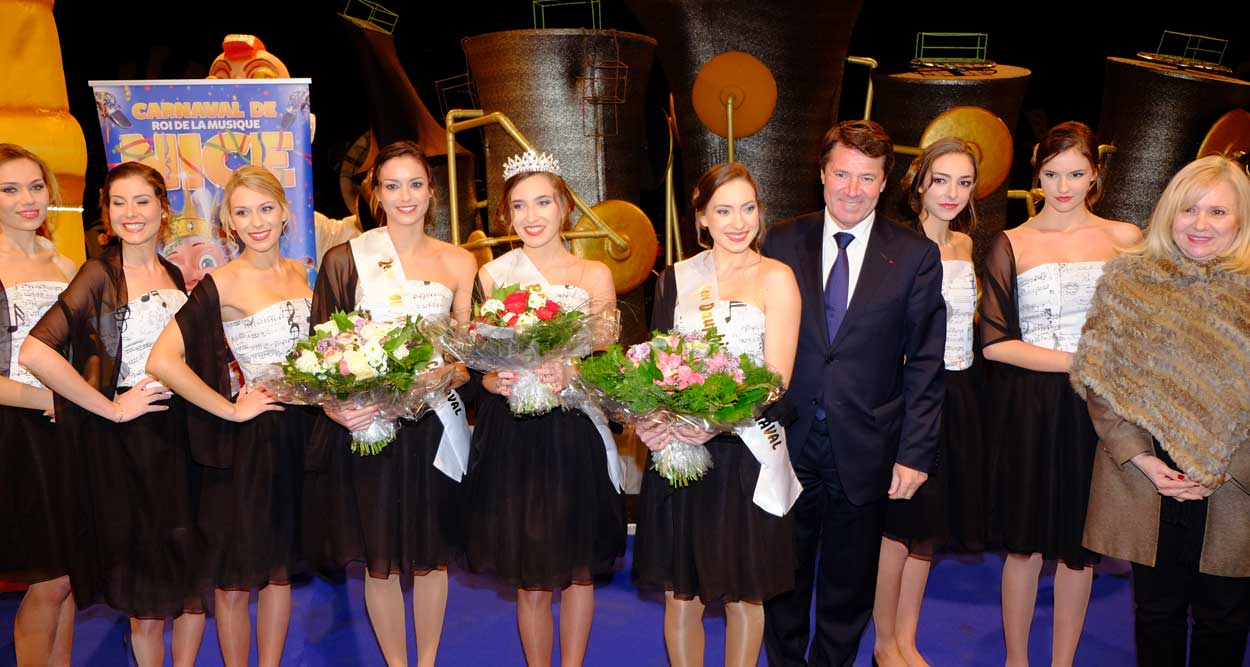 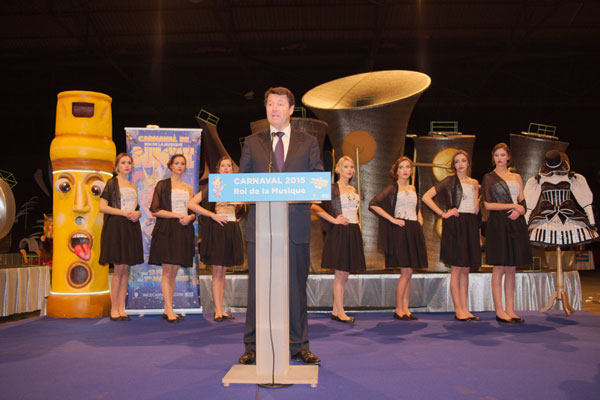 The coronation of the Queen of the Carnaval de Nice 2015 and her dauphines took place on February 11, 2015, presented by Christian Estrosi, MP-Mayor of Nice and Denis Zanon, Director of the Tourism Office.

On February 11, 2015, at the Halle Spada in Nice, Christian Estrosi, MP-Mayor, President of the Nice Côte d’Azur Metropolis and Denis Zanon, General Director of the Tourism Office, crowned the Queen the 2015 Carnival and her dauphines. The election of the Queen and her runnerup is one of the highlights before the Carnaval de Nice as they become ambassadors for the flower battles and parades.

One of the most prestigious carnivals in the World

The 131st Carnaval de Nice will take place from February 13 to March 1, 2015 and this year the King of Carnival will be that  of Music. Since the Middle Ages, when the festive event filled the role of social outlet till now, when he became one of the three largest and most prestigious carnivals in the world and competes in notoriety with Rio and Venice. The whole the Nice Carnival events attract 1 million visitors and 600,000 spectators. 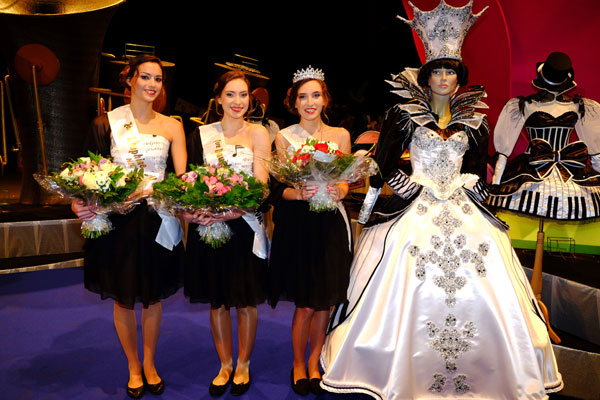 The Queen’s name is Cindy Marbac, her first Dauphine is Athena Groslambert; they both are 19 years old and are medical students. The 2nd Dauphine is Esther Meallet, aged 25, she is surveyor/topographer. As ambassadors of the Carnival, they will take part to all the festivities and throw flowers to the public from the floats of the Flower Parades.

The Carnival parades in the gigantic setting of Place Massena: 18 floats will play the King of Music’s score in giant, colorful parades – day and night – along with 180 “Grosses Têtes” and more than 1,000 musicians and dancers from all around the world.

The Promenade des Anglais Flowers Battles offer a real festival of flowers on 20 floats adorned with the finest floral arrangements. Sublime girls and characters in extravagant costumes throw to the public some flowers of the region: mimosas, gerberas, lilies…

The second weekend of Nice Carnaval will host the Carnival Bath and the Zumba.

Vira La Roda: on February 20 and 27 at 12 am, two gourmet lunches on board the Big Wheel, a charity to benefit students seeking access to the restaurant trade.

A tribute will be paid to the cartoonist Tignous (Bernard Verlhac) murdered by jihadists in the attack against Charlie Hebdo in Paris. He has attended six editions of the Carnival, designed 9 floats and 3 posters.

Sunday, March 1: Closing festivities with incineration of the King and fireworks. 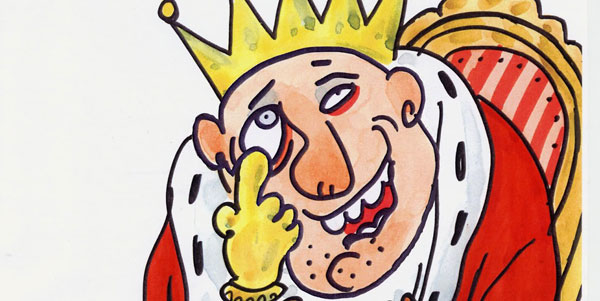 The first “Nice Carnival Run”, a festive race on 5 or 10 kilometers; to participate, you must be disguised!

The floats of the Flower parades redesigned, with new structures and a design revisited on the theme of Music.

The “Parada Nissarda”, a carnival parade performed by Nice associations around three main musical themes – Jazz, Samba and traditional Niçoises music – which will take place on the Quai des États-Unis on the first Sunday of the Carnival. 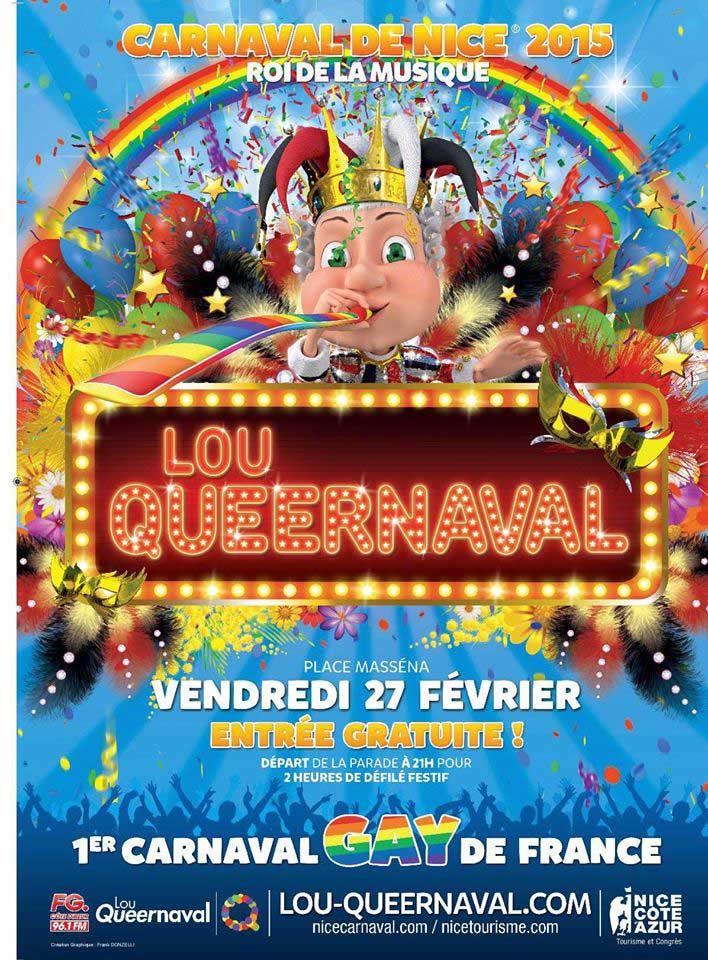 A part the official program of the Carnaval de Nice 2015, the first edition of Lou Queernaval, the first gay parade carnival in France, will make the Place Massena sparkle and twinkle, a few meters away from the legendary Promenade des Anglais on Friday, February 27, 2015, from 21h.

Lou Queernaval and its night parade will be in line of the Niçoise great carnival tradition. The King of the Music will be celebrated with a lot of floats, marching bands and “big heads”. Brazilian Batucadas and African percussion troops will bring their unique festive touch of madness. Dancers, transformists, a rock band and many artists promise a hullabaloo and joyful cacophony.

Nice, the second largest city in France after Paris to have celebrated the most marriages of same-sex couples, has been classified the 5th most gay-friendly city in France by the Magazine Têtu.

Christian Estrosi as obtained that Nice and the Maritime Alps be placed in Plan Vigipirate Attack Alert and has implemented substantial means to ensure the safety of visitors and Niçois: more military, mobile units, CRS and Gendarmerie squads. The parades areas will be closed with enhanced controls. Christian Estrosi concluded with these words: “Do as the Mayor. Walk along the streets without fear. I’ll be the first to do it!” 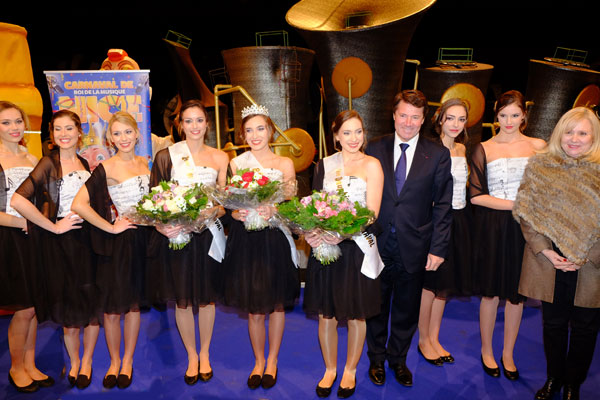 The elected miss and Christian Estrosi 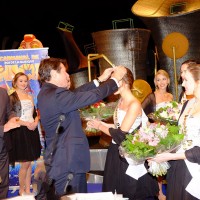 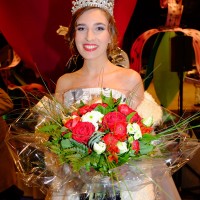 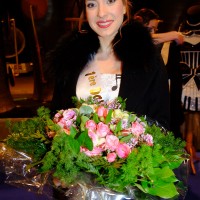 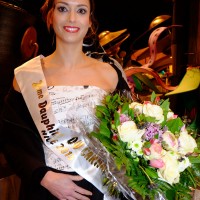 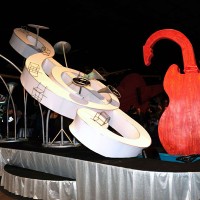 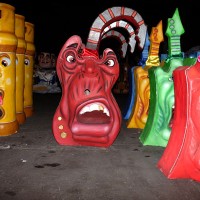