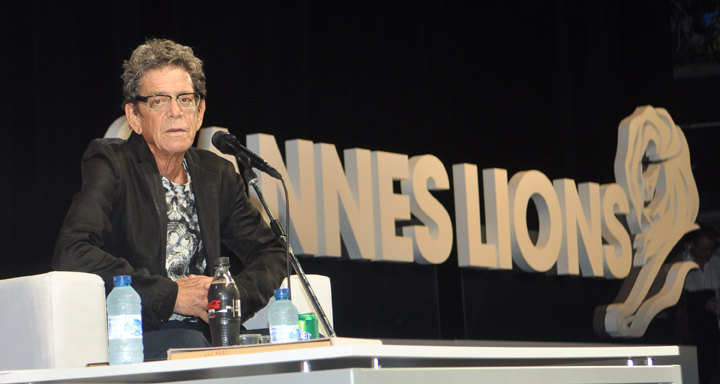 On Sunday October 27, the death of Lou Reed at the age of 71 years was announced by the Magazine Rolling Stone.

Lou Reed’s death opens one of the most gaping mourning of the history of Rock, all generations considered. A loss, that on the verge of a long career of nearly half a century, rich of forty albums with sounds interspersed of rock and poetry. He will remain in the minds of all as one of the most influential musicians of the rock and an immortal icon with the album “Berlin”, released in 1973. He was primarily a avant-gardist of music and an excellent provoker, reinventor of rock’n’roll after Elvis Presley especially with the legendary Velvet Underground & Nico and its cover signed by famous Andy Warhol.

This year in June, a few weeks after his liver transplant, the American rock legend honored Cannes Lions 2013 with his presence for a keynote and a press conference during which Lou Reed had entrusted us with ease and humility wiyh his feelings about creativity and  the world of music today.

Discover the report on Lou Reed’s presence at Cannes Lions 2013 on: https://yesicannes.com/lou-reed-walks-on-the-wild-side-of-creativity-at-cannes-lions/