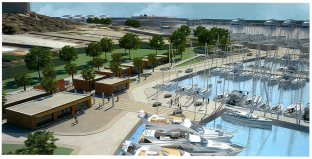 The Port Vauban, located close to the old town of Antibes, between Nice and Cannes, nestled in a natural inlet comprised between the Fort Carré and the old harbor, both built on two prominent rocky corners, surrounded by Bastion of Gravette and ramparts, is the first marina in Europe in terms of tonnage. But until when?…

For, despite the preference for a base such as Antibes or Palma in winter, many boats go to other destinations in order to minimize costs. Marinas in Spain, Italy, Croatia, Tunisia and Cyprus are now benefiting from the saturation of the French Riviera to develop new locations far greater in size.
The significant lack of location in the marinas on our seaside towns makes that 41,775 applicants are on waiting lists for 301 ports in the region, resulting in high prices for rent, electricity and water. For a decade, the fleet of super yachts considerably increased in size, far exceeding the number of places available on the marinas.
Despite a reasonable improvement in the boating market, the demand for berths is growing again. The fundamental reason lies in the choice of owners, captains, crew and charters who prefer by far the Mediterranean where the climate, the environment, restaurants, culture and transportation are important and accessible.
Therefore, given the aggressive marketing of new or renovated marinas, super equipped in logistics and conceived to bring a high level of service to their users, the Port of Antibes, wanting to keep its leading position and remain competitive, has decide through ASAP Antibes to redevelop and expand the port to 1 642 rings. A crucial issue for the influence of the city, its businesses and its people.
The project established in 2011 having not taken shape, the ASAP Antibes wants to accelerate the machine with a new immediate strategy. At first, set up an port Agenda 21, installation of video camera, establishment of a wifi access for boaters, adding a second toilet block, standardization of the Capitainerie, renovation of the median with a game of “boules”, rehabilitation of the north pier and dikes to counter flooding.
In the future it is also planned to promote new technologies of information and communication to make of Antibes Port Vauban “The Port of the Future”, to provide access to the sea to Sophia Antipolis, to suppress the parking of cars, develop a plaza adjoining the same parking lot, renovate all ramparts and redevelop the area around the Capitainerie, with the installation of an economic activity and trades, rehabilitate the promenade around the harbor that goes from the old town up to the Fort Carré.