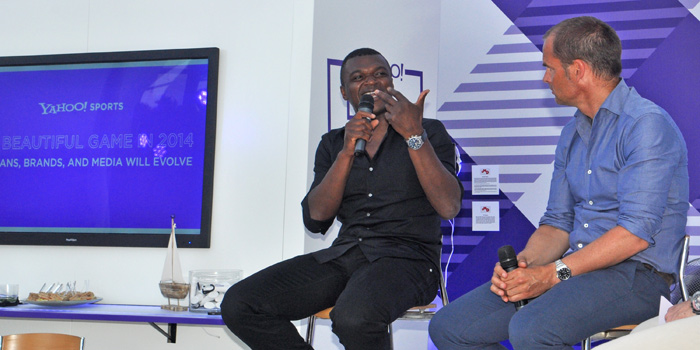 At the Cannes Lions 2013, Yahoo! the American society of Internet services, had set its quarters on the Croisette, facing the Centre d’Art de la Malmaison, to receive lecturers and festival goers in a comfortable space with clean design, arranged with a bar that was serving cold drinks the day and aperitif in the evening, to the sound of soft live music slowly evaporating into the Cannoise night. On June 18, football stars Marcel Desailly and Frank De Boer came to talk about the importance of social media for their image and that of sport.

The beautiful game in 2014: How fans, brands and media will evolve? To answer these crucial questions during Cannes Lions 2013, Yahoo! Sports invited two football stars, whose images are largely spread on social media. Marcel Desailly, world champion in 1998 and European champion in 2000, now a consultant for Canal Plus, have earned no less than 96 million euros in advertising earnings between May 2012 and May 2013. Frank De Boer, former footballer, strong defender of Ajax of Amsterdam and pillar of the team for 12 years, is now coach of his team until 2017. The pair of stars came to conference about the impact of social media on the sport because at Yahoo! Europe, sport is also at the center of the international marketing strategy, illustrating the increasing overlap between the digital and sports. Yahoo! also offers a space dedicated to the competition through its Yahoo! Sports news, photos, competition results and predictions on competition such as the World Cup soccer, available online and accessible to readers of the site.
Marcel Desailly and Frank De Boer explained the economic opportunities created by these technological developments, as being an actor in this sports business organized by the sponsors used to turn them into means of communication, with a direct relationship with their fans via blogs or personal Facebook pages.
Today, one out of four fan goes through social networks like Facebook or Twitter, to interact with other fans of sports competitions, and although television remains the king media for sports consumption, both guest athletes agreed upon the importance of their role, and the explosion of their use in sport.
They also appreciated the easy access to the sports world via social networks, creating young people’s desire to have a healthy life by practicing a sport. The idea is to give them the taste of competition and a pulse to be the best in their future life. They evoked the U.S., where sport activities are particularly associated with education as most colleges and universities hold sporting events. The sports competitions in schools play an important role in American sports culture. For example, the university sports governed by the National Collegiate Athletic Association (NCAA) is rivaling with the popularity of professional sports. 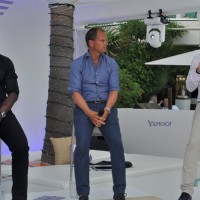 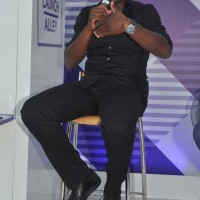 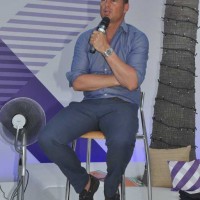 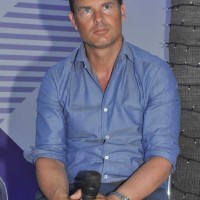 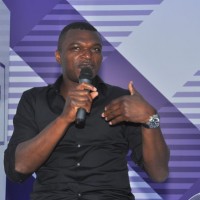 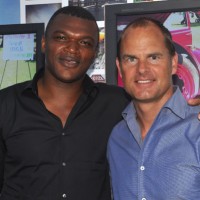