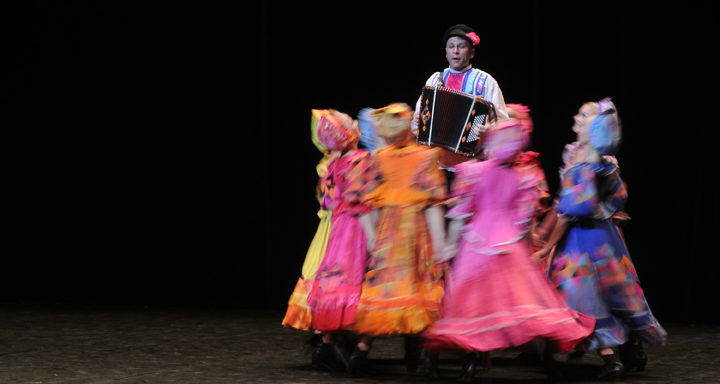 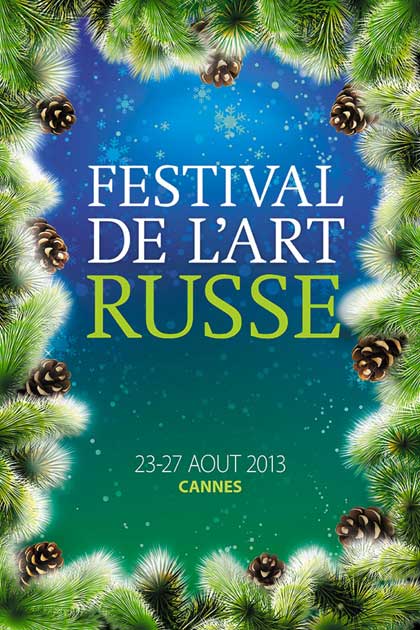 The 2013 edition of the Cannes Russian Art Festival at the Palais des Festivals will provide an overview of the arts and artistic expressions of the Omsk region in Siberia. This region, through the vastness of its territory and its rich history, is present in the literature, cinema and painting and the talents of its artists and attractive folklore and traditions, lead us to the origins of famous “Russian soul”, so fascinating to discover.

Omsk Popular Choir, boasting 35 singers, 21 dancers and nine musicians (traditional instruments), is deploying all the charm and energy of the folklore of a region with roots marked by styles and festive traditions brought by its early peasant populations and Cossacks: songs, dances, choral singing and ornate original traditional costumes and musical instruments…

Throughout the evening will follow one another on the stage of the Salon des Ambassadeurs soloists from the “Omsk Popular Choir”, the quartet “First” and the “Diligence” accordionists ensemble, soloists of “Omsk Philharmonie”, Anna and Sergei Shinkovaya Garkusha, the artists of the theater group “Third Circle”, the ballet “Malina” as well as Valentin Tumentsev and stars of the Russian variety Sati Kazanova, Alexander Olechko and Stella Djanni. Omsk Stylists will showcase their creations in the fashion show “Siberian Ethnic Design”. The special guest of the evening will be the Georgian singer David Gomartelli.
This event will honor two great personalities: sovietologist Hélène Carrère d’Encausse and actor-director Robert Hossein, who will receive an award in recognition of their outstanding contribution to strengthening cultural relations between Russia and France .

Screenings of four feature films offering a unique perspective on the recent Russian cinema and show that current directors manage to be in tune with the times, without ever losing the specifics of style and tone that made the reputation of excellence Russian cinema.

11h: “The real tale” by Andrei Marmontov (2011-110 min) – In the presence of producer and actor Sergei Bezroukov and actress Irina Bezroukova.

Young artists of “Third Circle” theater will present “The Wizard of the country of cranberry ice”, a show for children and adults imbued of magic and mystery unique to Siberia. In a playful mood and a tone tinged with humor, the play reflects on stage the powerful “Siberian romance” portrayed in literary works like “Michael Strogoff’s Journey” by Jules Verne.

The screening of two representative films for a tribute to one of the greatest personalities of international cinema and cult director of contemporary Russian cinema:

“The Academy of Young Singers” was created in 1998 within the “Mariinsky Theatre” and is directed by Larissa Guerguieva. In the idyllic setting of the Villa Domergue, soloists Ilya Selivanov – tenor, Maria Bayankina – soprano, Andrey Bondarenko – tenor, Eleonora Vindau – soprano and Maria Maksakova – mezzo soprano, will perform the “great Mariinsky” classical repertoire, accompanied on the piano by Larissa Guerguieva

Closing the Festival in 2013, the avant-garde choreographer and director Alexei Ischuk offers, as a world premiere in Cannes, his “Elusive Beauty”, an aesthetic ballet in two acts showing an original vision of the birth of the world. This hymn to beauty is one of the original productions, that, since its inception in 1989, enabled the “New Ballet” to establish itself as one of the most creative formations of the Russian dance stage.

Friday 23 to Tuesday, August 27 – Exhibition “Promenade in Omsk in the snow”

Meet the inhabitants of Siberia, its artisans and artists and discover its rich and tumultuous history, with a part (weapons, equipment and uniforms) devoted to the time of the conquest of Siberia in the 16th century by the army of Ivan the Terrible.

“A Journey to the Heart of Siberia” with Artists from Omsk

18.30 – External Activities – Parvis of the Palais des Festivals and Congresses

With the Philharmonie Fanfare, the majorettes of “Solnychkо” choreographic studios, the Theater “Тhird Circle”, the “Тiumentsev show” duet, Omsk Jazz-Band…

With the help of Cannes Syndicat d’Initiative, the Cannes departmental Conservatory of Music and Drama and the Clementine Academy. In cooperation and exchanges with young Cannes talents, the Young Russian Art Festival offers a new perspective on the future of the Russian art stage: the artists who will be the stars of tomorrow with concerts, films screenings and an exhibition.