From January 20th to 26th, 2018, Les Chefs au Sommet d’Auron – 7th edition – offered memorable gastronomic experiences at a unique and privileged price. In addition to cooking shows by chefs at the ice rink, the renowned chefs officiate each evening in the restaurants of the Haute Tinée resort and offer sumptuous gourmet dinners at the price of 45 per person to tourists and locals.
The Chef Christophe Dufau from Les Bacchanales in Vence and Pastry Chef Jean-Michel Llorca from the Hotel & Restaurant Alain Llorca at La Colle Sur Loup delighted the gastronomes at Les Pivottes restaurant at the Hotel L’Ecureuil in the center of Auron.

Haute gastronomie at the foot of the slopes

For seven years, the Festival of Mountain Gastronomy has been bringing together many talented chefs and pastry chefs from the French Riviera who share an authentic moment of culinary pleasure and conviviality in the heart of the sumptuous Mercantour mountains. During the festival, the renowned chefs perform every night real gastronomic feats by performing dinners on “pianos” unknown before. 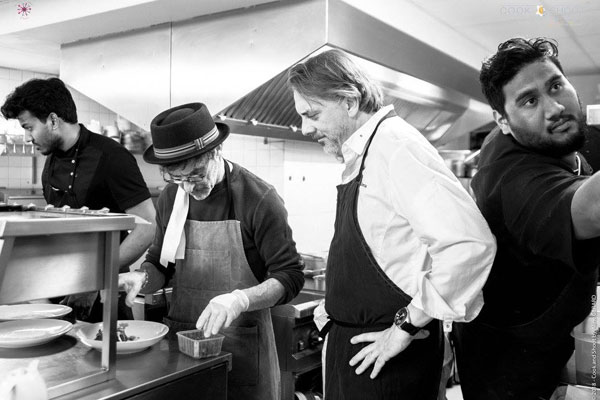 Two prestigious chefs at the “pianos”

On Wednesday, January 24, 2018, the Hotel L’Ecureuil in the heart of Auron hosted in the kitchen of his restaurant Les Pivottes the talented chef Christophe Dufau from Les Bacchanales in Vence and the pastry chef Jean-Michel Llorca from the Hotel & Restaurant Alain Llorca in La Colle Sur Loup. Together, they have transposed the delicious culinary experiences of Les Bacchanales and Restaurant Alain Llorca into the woody, warm and mountain setting of Les Pivottes restaurant at  Hotel L’Ecureuil.
These two exceptional chefs delighted the palate of gastronomes with their menu based on local flavors, combining simplicity and modernity in finely-prepared plates made with Coppa directly from the Esteron, Fario Trout from the white water of the Provençal moutain rivers, the snails from Villars, the wine from the hills of Bellet in Nice, the Mimosa Oil, and the hazelnuts from nearby Piedmont. 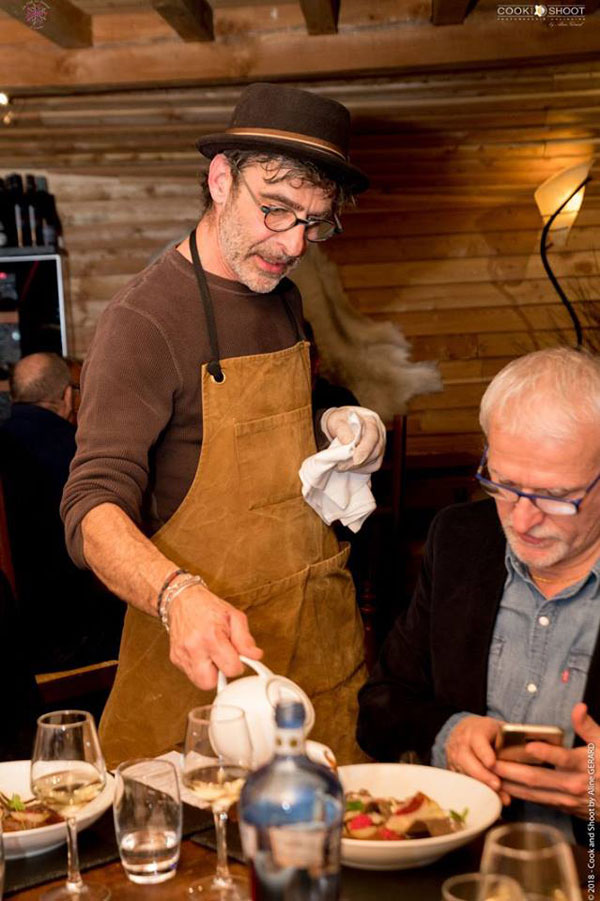 Christophe Dufau’s cuisine reflects his international and eclectif background. Everything starts in London at the Frères Roux‘s restaurant Le Poulbot, a restaurant with 3 Michelin macaroons. He then goes back to France for a passage at the Ministry of La Francophonie and at Bernard Loiseau‘s at La Côte d’Or. He then flies to Denmark where he puts his suitcases in the kitchens of Grands Hôtels Relais & Châteaux. First at the Falsled Kro then at Sonderho Kro, where he finally officiates as a chef. It was during this eight-year period that he took advantage of the winter closure months to expand his culinary universe by traveling the world. An experience in New York alongside Daniel Boulud, a street kitchen in Kuala Lumpur, a tapas bar in San Sebastian, a fish restaurant in La Martinique or Italian trattorias… 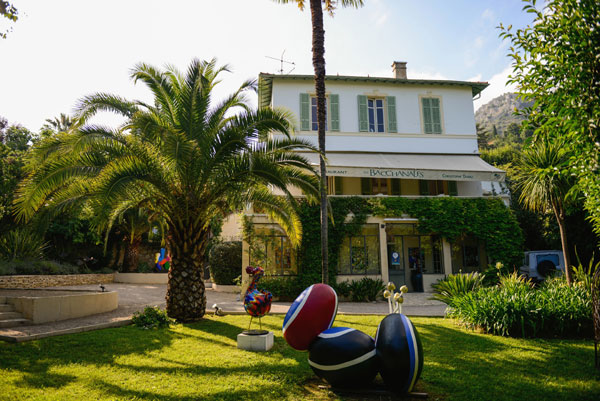 In 2005, he decides to try a new adventure. An adventure in which he will be able to express all the facets of his talent, his personality and his experiences. He becomes his own boss and opens a gastronomic restaurant that resembles him, with a Locavore concept, Les Bacchanales in Vence.
The Michelin-starred chef Christophe Dufau makes a creative, fresh and constantly renewed cuisine du marché. This passionate and talented chef is cooking delicious recipes – of which he alone has the secret – in a menu that changes every week in keeping with the seasons. 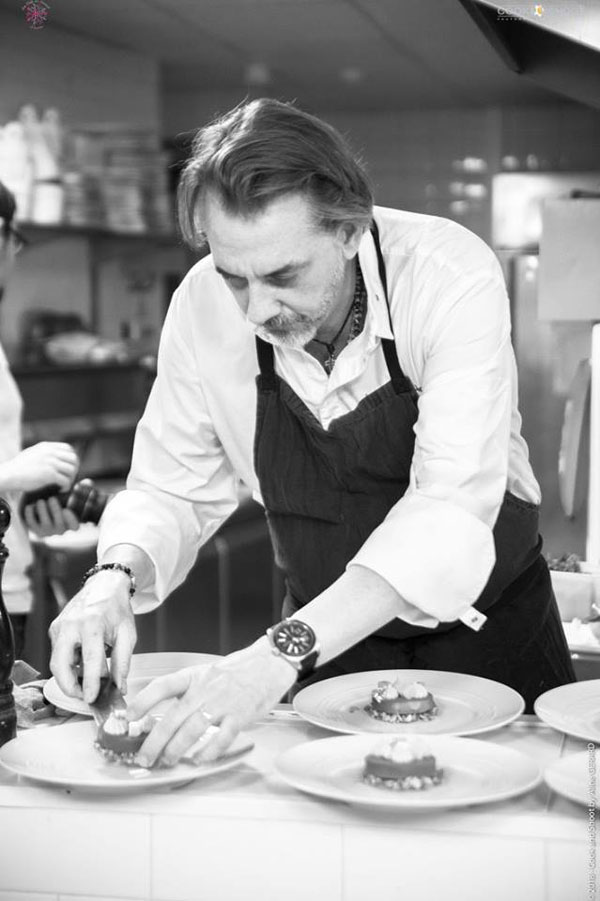 Jean-Michel Llorca is a pastry chef who excels in the score of sweets. After a period at the Hotel Juana in Antibes and the restaurant La Passagère at Hotel Belles-Rives in Juan les Pins, he is now playing his score at the Restaurant Alain Llorca in La Colle Sur Loup, closing the famous culinary delights of his brother Alain Llorca by a fireworks of desserts. 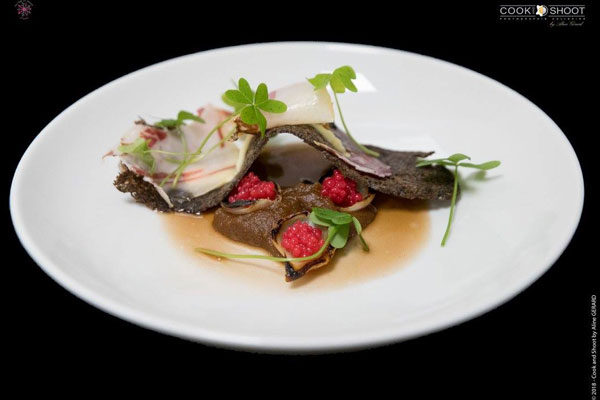 Amuse-bouche: Onion, Pomegranate, Coppa from l’Esteron. The onion with a subtle and slightly sweet taste, the pomegranate and its small tangy grains counterbalance the incomparable taste of this delicious delicatessen from Northern Italy, a coppa from the Provencal farm in the Estéron valley. 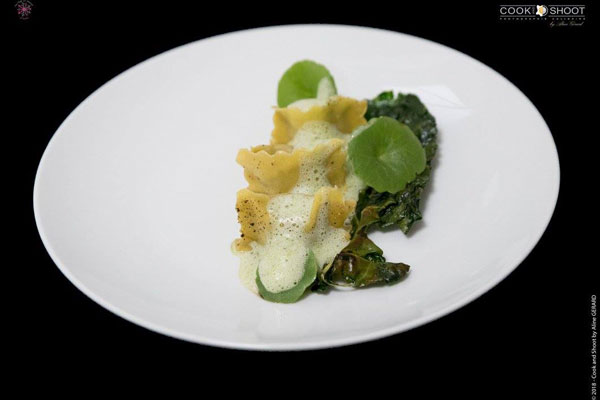 Starter: Plins Potato Anchovy, Broccoli and Oxidized Mushroom. These small ravioles, called “plins” in Piedmont, Italy, with their sweet flavor, are married with the subtle bitterness of wild broccoli. 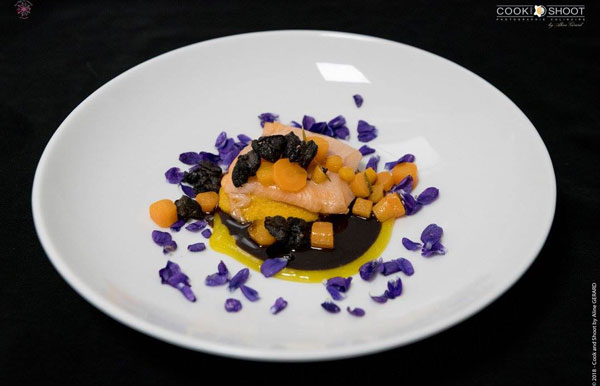 Plat: Fario Trout, Snail from Villars, Lie of Bellet wine and Mimosa Oil: The fario trout, this fish from cold and tumultuous river, brings a breath of fresh air to the plate. The snails with the flavors of the Provençal soil from Villars-sur-Var (where snails are celebrated), get along in the dish with the fruity dregs of Bellet wine to bind the sauce and the floral perfume of the mimosa oil, bringing sunny notes to this beautiful plate with accents of south and violets. 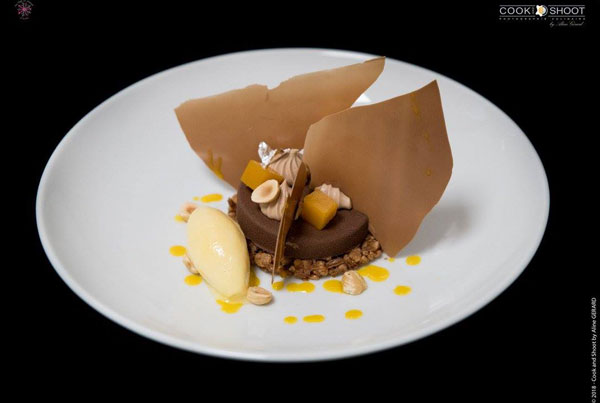 Dessert: Palet Chocolate Chestnut from Piedmont, Mango Jelly Yuzu. An airy and chocolaty treat with long notes of yuzu flavored mango. The hazelnuts are a nice wink to the transalpine gourmandise. 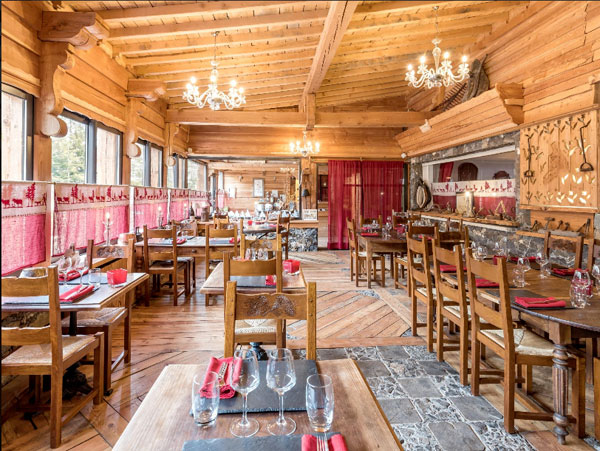 In the heart of the very popular resort of Auron, Princess Stephanie of Monaco‘s chosen city, the three-star mountain hotel L’Écureuil cultivates a warm chalet atmosphere, offering a friendly and attentive reception all year long for savoring a green-in-summer and white-in-winter mountain.
Every evening, the restaurant Les Pivottes comes alive around its wood burning stove – during winter evenings – and offers its semi-gastronomic à l’ardoise seasonal cuisine, with the great classics of mountain specialties but also revisited dishes of our childhood.
The hotel restaurant L’Écureui is managed by Michel Guillot, President of the Tourist Office of the Stations of the Tinée and organizer of Les Chefs au Sommet d’Auron. 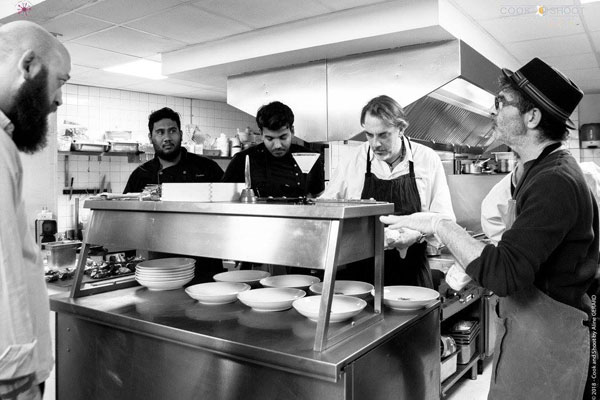 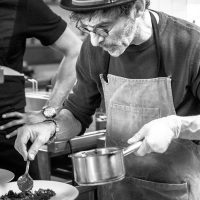 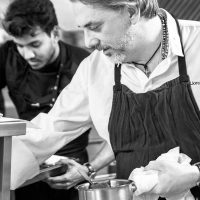 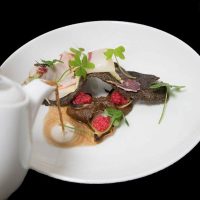