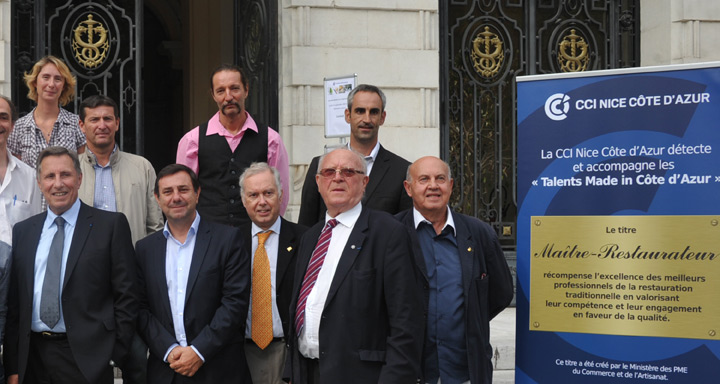 On the occasion of the Meetings of the Restauration, the CCI Nice Côte d’Azur launched on September 16, 2013 the first “Maîtres-Restaurateurs of the Alpes- Maritimes” guide, in the presence of its President Bernard Kleynhoff and Theo Mansi, Director and Board Member fo the National Association of Maître-Restaurateurs.

The title of Maître-Restaurateur was created by the Ministry of SMEs, Trade and Handicrafts by Decree of 14 September 2007. It recognizes the excellence of key professionals of traditional restauration by valuing their expertise and commitment to quality. The title Maître-Restaurateur is assigned to an individual – not to a company. It is awarded by the Prefect of the Department for a period of four years and is materialized by a “Maître-Restaurateur” plaque. This title is awarded to any manager of a company of traditional restaurant service, but its employees, even the most skilled, can not claim the title that remains attached to the entrepreneur.
However, the business manager must have qualifications and/or professional experience and meet certain criteria set out in the specifications. The candidate for the title Maître-Restaurateur undertakes to comply with the rules defined in the specifications, grouped into five main categories:
• The origin and processing of the products used
• The customer relationship
• The interiors fittings
• The external equipment
• The health and safety rules.
He will in particular propose a cuisine made on site, with a majority of fresh produce, to surround himself with a qualified kitchen and restaurant staff, ensure the provision of quality service and meet the regulations regarding health and safety. This guide is a repository of establishments titled Maîtres Restaurateurs, listed between Menton and Theoule-sur-Mer, in late May 2013. It will share moments of conviviality with a French Riviera cuisine. Currently, the guide lists 52 establishment and 63 are waiting to be awarded the title.

At the launch of the guide, Bernard Kleynhoff said: “Through them, and as such, it is the recognition of our French Riviera soil, real argument of attractiveness of our region. Because the sun is not enough to last over time, this label confirms your energy and contributes to the reputation of the destination Côte d’ Azur.” 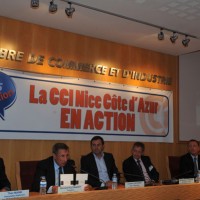 The CCI in action 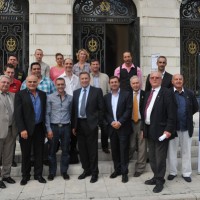 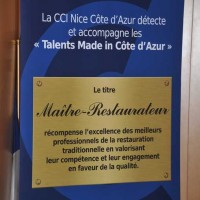