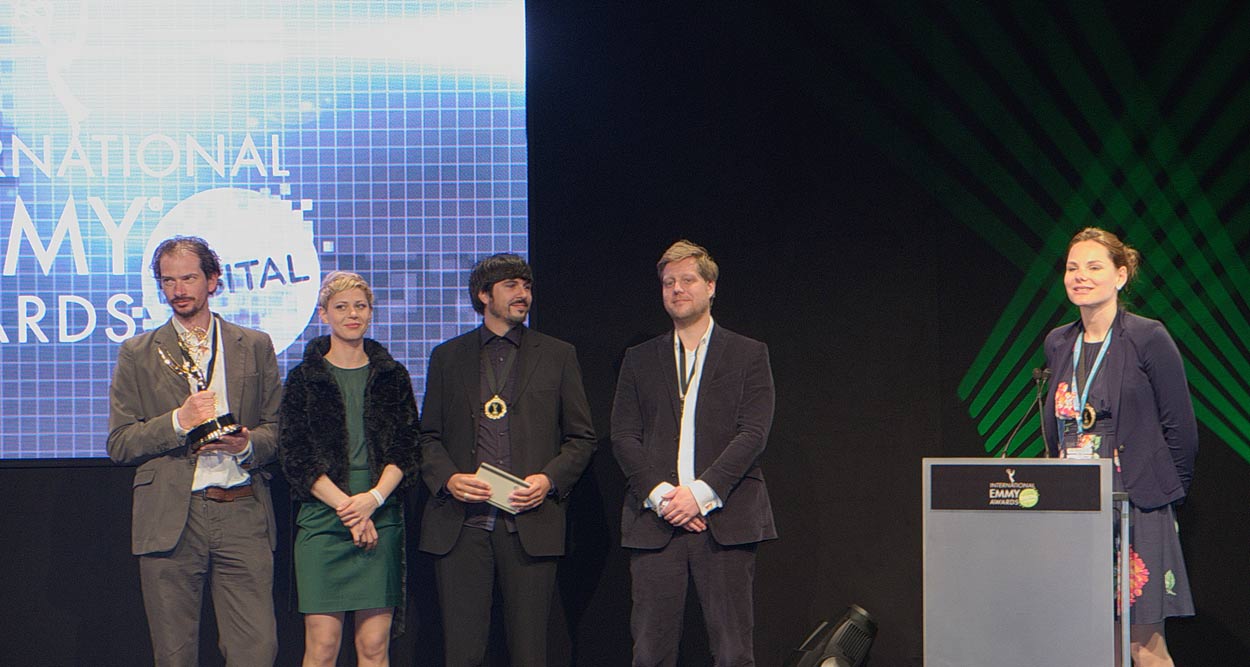 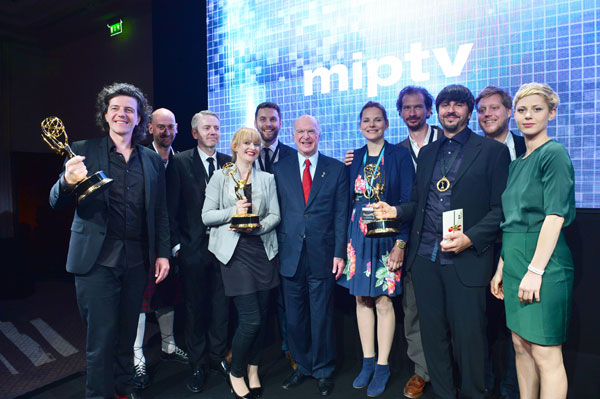 The winner and stars ©Miptv

The tenth edition of the International Digital Emmy Awards prize-giving ceremony took place at the MIPTV 2015 Opening Party in Cannes.

Like every year, the International Academy of Television Arts & Sciences prize-giving ceremony, hosted by TV stars, took place at the MIPTV Opening Party on April 13, 2015 at the Martinez Grand Hyatt hotel. The awards event, sponsored by the Bell Fund of Canada, was attended by over 300 international executives from the TV, broadband, and mobile industries, looking forward to discover which leading trends were awarded.

The unique power of storytelling

Bruce L. Paisner, President & CEO of the International Academy of Television Arts & Sciences, said during his presentation address: “The Academy started presenting the Emmys ten years ago and the reach and relevance of digital entertainment and information has exploded across that decade. This year’s Emmy winners demonstrate yet again the unique power and versatility of storytelling through interactive enhancements.”

The winners of the International Digital Emmy Awards came from Germany for the Fiction category, The Netherlands for Non-Fiction and the United Kingdom for Children & Young People program. Brian Robbins, Founder & CEO of AwesomenessTV, was presented with the Pioneer Prize. 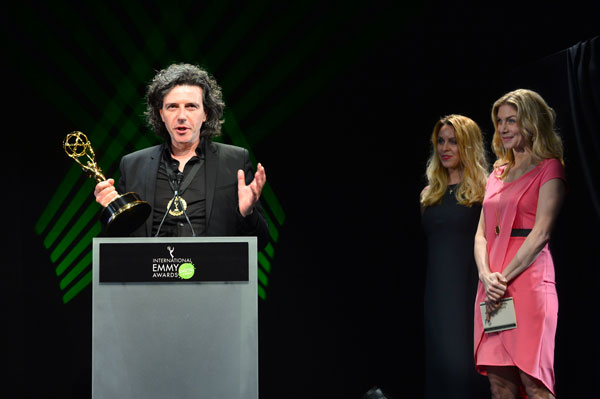 The award was presented by the American film and television actress Piper Perabo, who introduced Corona Television & Freemantle Media International action/romance drama The Fight at MIPTV.

The German production “Dina Foxx – Deadly Contact”, a UFA Fiction and UFA Lab transmedia production for ZDF, is TV and online thriller, a crime story that tackles relevant contemporary topics. The Berlin based agency Exozet programmed an innovative 360° video player that plays both video and graphics, offering a full panoramic view, so that the users are able to see the thriller’s scenes in any perspective they want.
Each clue leads to a riddle that users must solve by finding fictitious websites, by scanning the movie and by employing their own deductive logic. The viewer who manages to solve all three online parts within one week will receive exclusive access to the movie before it is broadcast on TV. 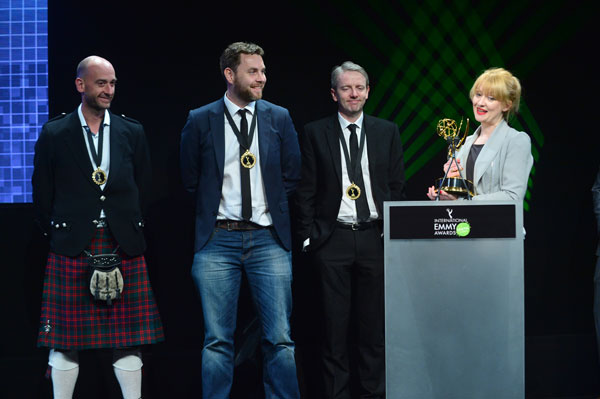 The award was presented by William Spencer and Caine Sinclair from The Two Bellmen, the first short film produced by Marriott Content Studio to reach consumers through branded content.

Reverse the Odds is a live fundraising show packed with stars and inspirational stories to raise awareness about cancer amongst youth, featuring a race of fun characters – The Odds. The players help them to transform their world from a drab wasteland into a colourful wonderland. In the game, the players see real images of cancer cells from patients, just like researchers analyse in the lab and this information is key for researchers who use it to achieve better treatments for patients. 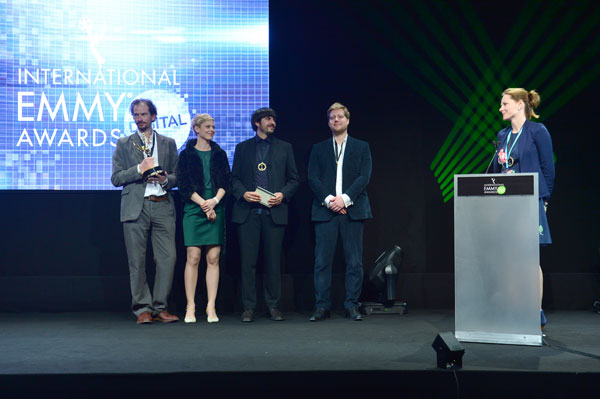 The award was presented by the lovely Elizabeth Mitchell, who joined the cast of Crossing Lines for the third season.

Last Hijack Interactive is an online transmedia experience that allows users to take part to the hijacking of a ship in Somalia. Exploring both sides of the story, it is unveiling the complex realities behind piracy in Somalia, though the eyes of a pirate and a captain, an advocate and a journalist, a parent and a wife.
Together with a use of data visualization, Last Hijack Interactive provides a glimpse of the causes and consequences of piracy and the impact of hijackings in Somalia and in Western countries. 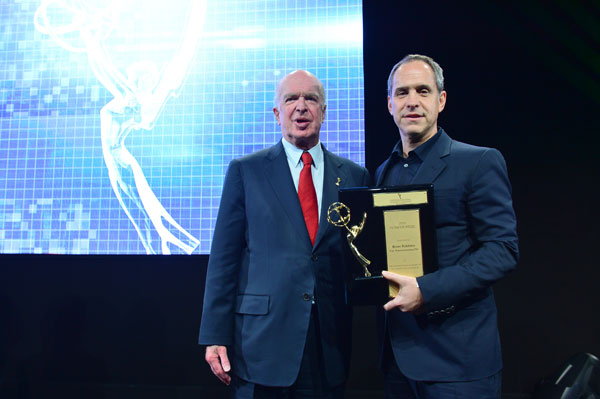 The award was presented to Brian Robbins by Claudia Cahill, Chief Content Officer, Omnicom Media Group/The Content Collective who spoke at the The Storytelling Singularity session at MIPTV

Brian Robbins is an American TV, film and digital media producer who created AwesomenessTV with Joe Davola. The multi-platform media company is serving the global teen audience and one of the most subscribed to teen destinations on YouTube. AwesomenessTV creates original web series, television shows like the sketch-comedy reality series “AwesomenessTV” on Nickelodeon and theatrical films.

About the International Academy of Television Arts & Sciences

About the Bell Fund

The Bell Fund is a non-profit organization, led by an independent Board of Directors representing various sectors of the television and digital media industry. It provides grants to Canadian independent producers who develop and produce engaging, interactive cross-platform digital content for Canadian broadcasters to complement and enhance associated television programs. The Bell Fund also undertakes training, research, business development and promotion for the digital media industry. 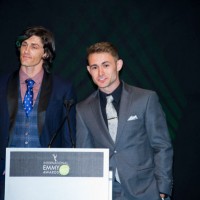 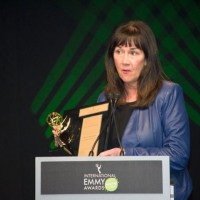 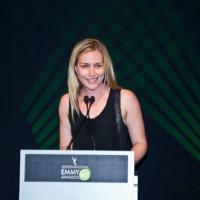