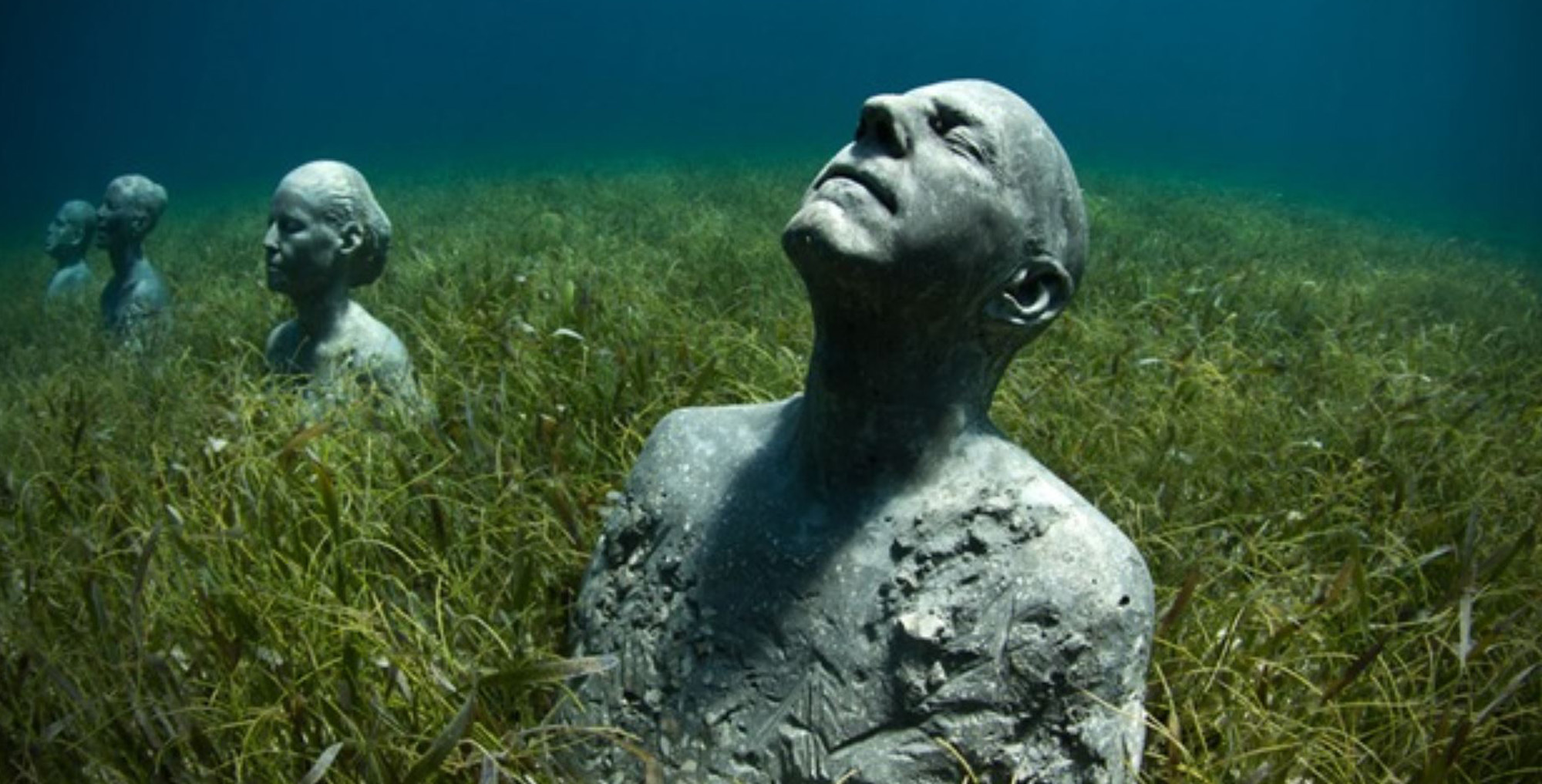 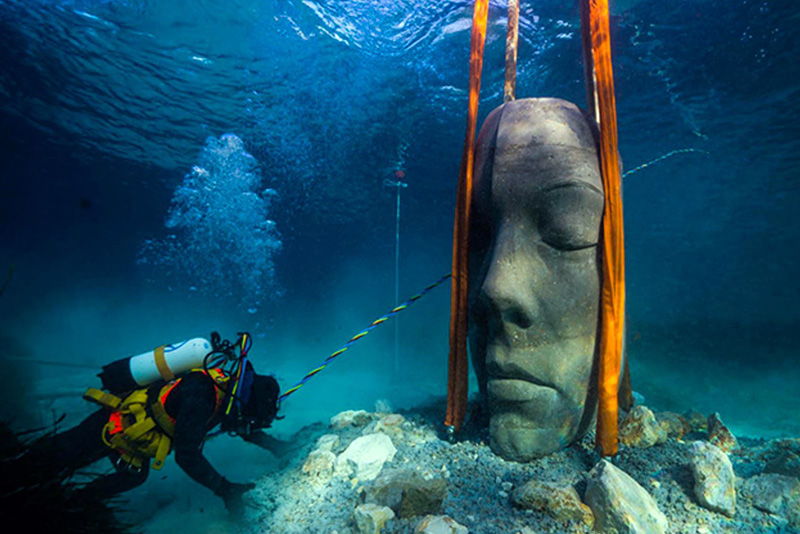 In Cannes, the first ecomuseum in France and the Mediterranean welcomes Jason Caires Taylor’s monumental statues with six faces immersed off the coast of Sainte Marguerite Island.

Jason Caires Taylor: the underwater exhibition composed of sculptures by the British artist Jason Caires Taylor, immersed near the southern shore of Sainte-Marguerite Island, has been visible since 28 January 2021 to divers equipped with a simple mask and snorkel. Weighing a total of ten tonnes and measuring more than two metres, transported by barge, the sculptures representing six Cannes faces were immersed in the turquoise waters of the Grande Bleue, at a distance of 80 to 130 metres from the shore and three to five metres deep. 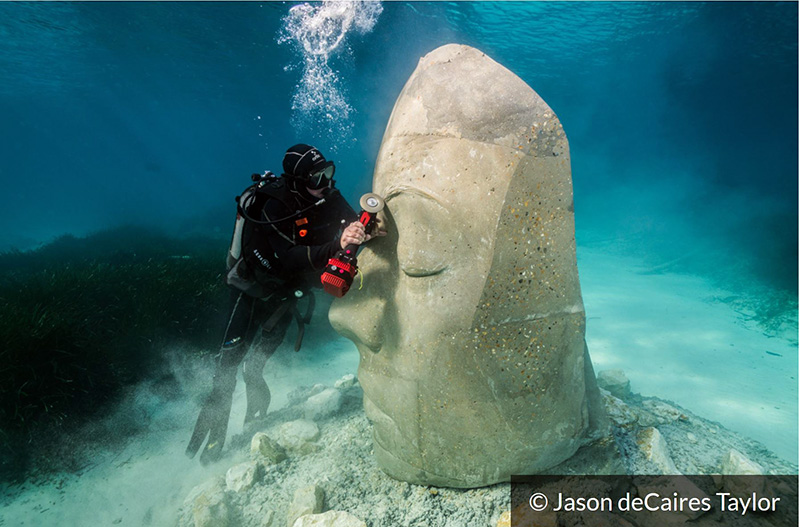 Chosen in collaboration with the Cannes Town Hall, the theme of the sculpted masks refers to the famous Man with the Iron Mask, a story linked to the city’s cultural heritage. Was the famous prisoner, locked up in the royal prison on the island of Sainte-Marguerite from 1687 to 1698, Louis XIV‘s twin brother, the adulterous son of Anne of Austria, wife of Louis XIII and the Duke of Buckingham, or of the same Anne of Austria and Cardinal Mazarin? The mystery remains and its legend attracts many visitors every year, lovers of old stones, strange stories and thrills. 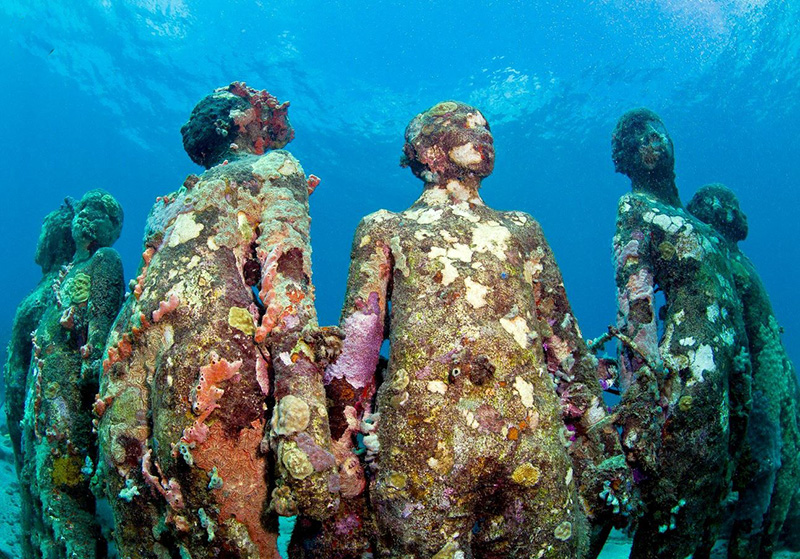 Diving into underwater art and ecology

This long project, which has finally become a reality, has the particularity of mixing art and ecology. Made from ecological marine material with neutral PH, the sculptures – which required a long and meticulous work – will form over time artificial reefs in which algae and coral can develop and fish can take refuge. Mayor of Cannes David Lisnard said: “Combining beauty and pedagogy, Cannes underwater ecomuseum symbolises my attachment to two fundamental values: cultural necessity and preservation of the environment”. 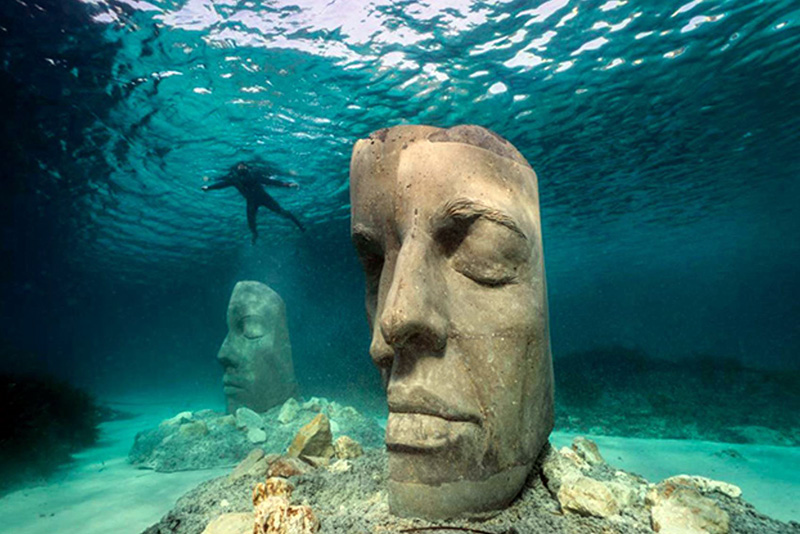 An ecomuseum to preserve marine biodiversity

Immersed a few metres below the surface, the mission of this ecomuseum will be to make visitors aware of the essential issue of protecting the Mediterranean. Its creation also made it possible to extend the “no mooring zone” between the Lérins islands in order to preserve the biodiversity of the sea bed. Here, Jason de Caires Taylor anchors his practice in a commitment to society, nature and the planet itself. Which goes to show that a committed act can take on attractive looks, while at the same time denouncing the foibles of our time and its environmental damage. 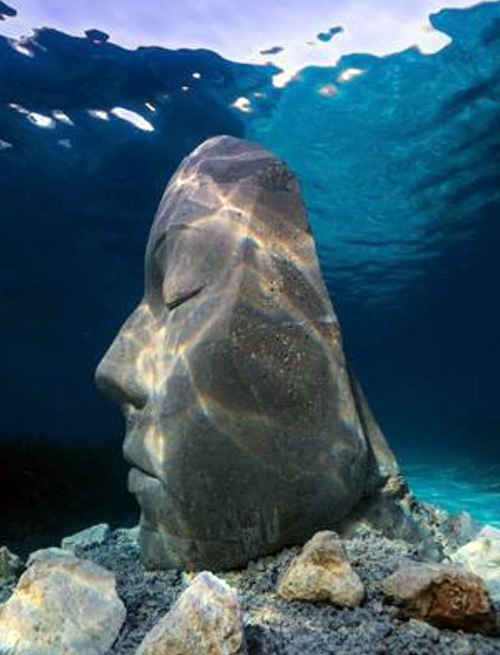 Classified among the 25 Wonders of the World by National Geographic

To this end, Jason Caires Taylor likes to play on the interaction between nature and man, its positive and symbiotic contribution. He observes how the object changes with its environment. With the water modifying the appearance of his sculptures and the light deflecting the propagation of waves and distorting the movements of the water, the stony mass of the work is amplified like through a magnifying glass. This project, mixing art and ecology, is not the artist’s first attempt. And whether in the Caribbean, the West Indies, the Canary Islands or Mexico, the underwater museums he has created are now among the 25 Wonders of the World according to the National Geographic magazine. 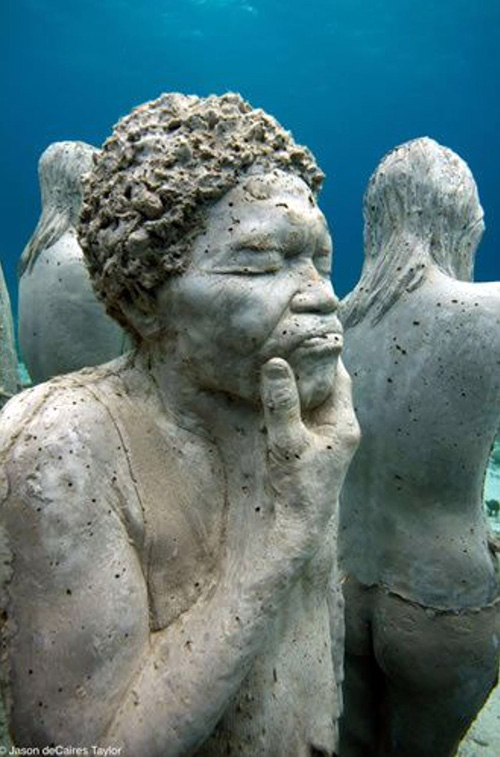 Commenting on this beautiful marine and artistic event, David Lisnard said: “In 2015, I was struck by the images of his work in Mexico. They were powerful and dreamlike, with a real ecological dimension. The installation of the sculptures in Cannes today provides an enlarged bathing area, a perfect setting for discovering underwater life. The waters are clear, the ground sandy; the statues should be able to play their role as hosts for the fauna and flora. We have forbidden the mooring of boats. It will be a place reserved for swimming, for swimmers coming from the shore a hundred metres away. The treatment of the faces proposed by the artist, both poetic and serious, is an ode to the splendour of marine biodiversity and the duty to protect it”. 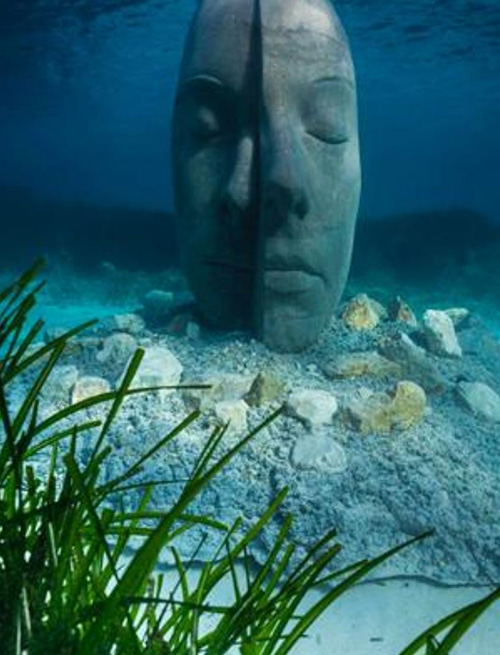 Born to an English father and a Guyanese mother, Jason Caires Taylor is an artist famous for his sculptures plunged into the sea and destined to become the habitat of underwater fauna and flora. His work evolves over time while bearing witness to our times through characters or objects from everyday life. The thread of his work lies between art and the environment, natural or urban, in order to be exhibited in public spaces, away from museums and art galleries – not unlike the approach of Street Art artists. Influenced by the Canterbury Cathedral, he became impassioned by stone sculpture. 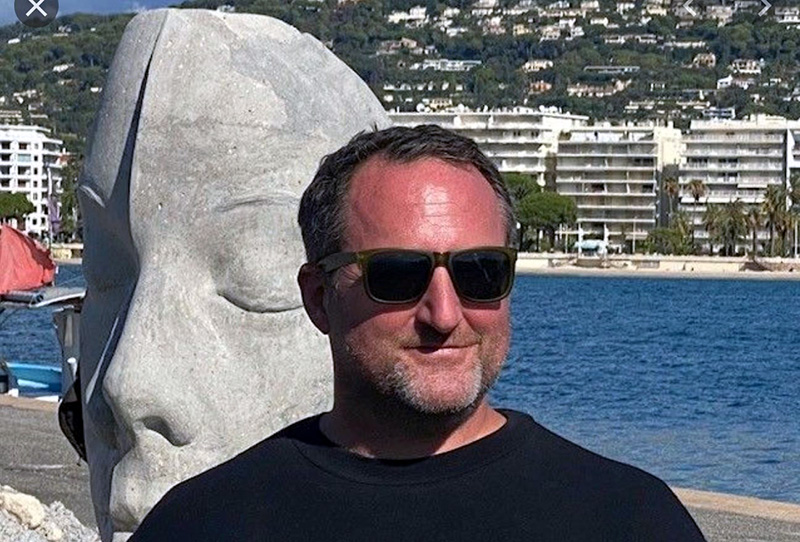 The land, fresh water and sea used as a base for the artist’s work

From 2006 onwards, the artist changed material and replaced stone sculptures with cement sculptures. He uses cranes and suits to immerse his characters from our daily life at the bottom of the water as well as still lifes. At 10 m below the water, the public can interact with this underwater artistic landscape, as well as nature, which reclaims its rights through the progressive covering of algae and coral. As for the fish, they benefit from a new habitat in which they seem to enjoy themselves, adding a lively touch to the inertia of the sculpted figures. Jason Caires Taylor’s work is attracting growing interest. One can find numerous articles in magazines such as National Geographic, Vogue, Daily Télégraph… 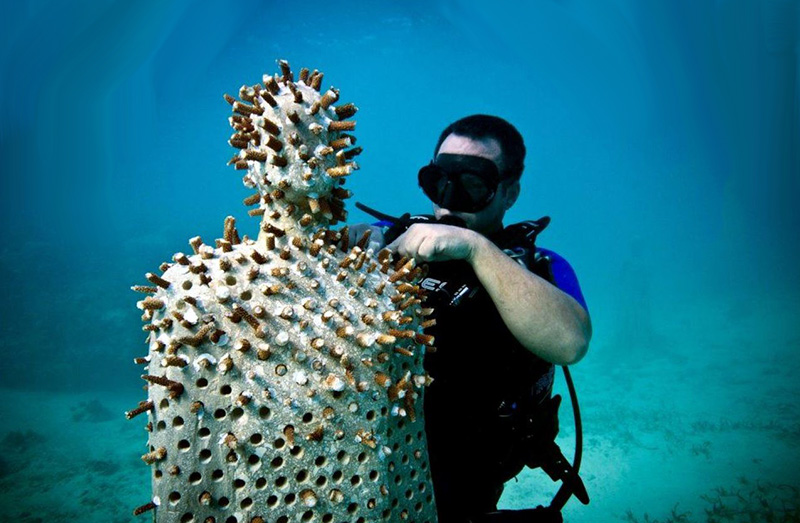