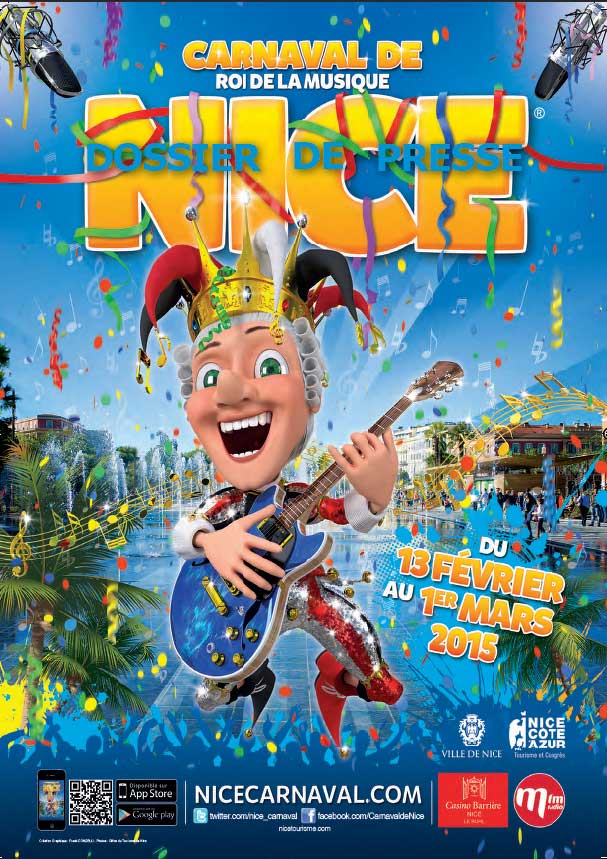 Nice Carnival King of Music will perform his great colorful festive winter show from February 13 to March 1st, 2015 with the Mediterranean as a backdrop.

The Nice Carnival is one of the largest carnivals in the world and the main winter event on the French Riviera. Carnival King of Music will offer a program of unforgettable entertainment with its two main events: the giant, colorful Carnival floats processions on the Place Masséna and the elegant Flower Battles on the Promenade des Anglais.

Time to mock everything

The Nice Carnival comes from a long tradition. By the Middle Ages already, on the eve of entering into Lent, the people of Nice rejoiced with masked balls, masquerades, frenzied farandoles in a context of transgression. The rule was to make fun of everything, of everybody, under the permissiveness of masks and disguises until Mardi Gras.

On the Place Masséna and around the Jardin Albert 1er, the Nice Carnival processions (Corsi) include 18 allegorical or burlesque floats, the King of Music exploring in an ironic way all the facets of this art common to all cultures and civilizations, remaining faithful to its vocation of universality. These giant, colorful parades take place day and night, with entertainment provided by over 1,000 musicians, street artists and dancers from across the world. 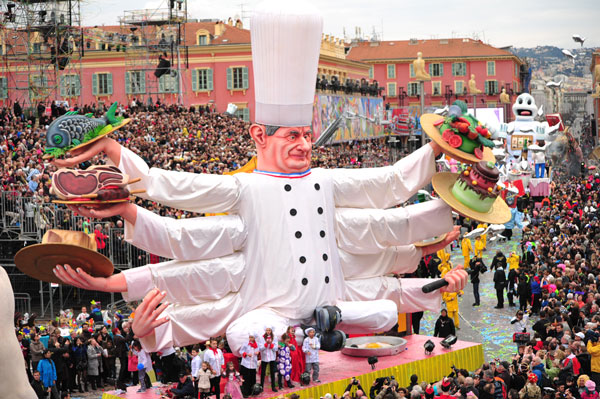 The charm of the Flowers Parades

The Nice Carnival offers poetic and charming Flowers Parades. Surrounded by the green corridor of La Coulée Verte and Albert 1er Gardens, along the blue waters of the Mediterranean on the unique setting of the Promenade des Anglais dominated by the dome of the famous Negresco, the elegant flower parades enhance the floral heritage of the region.
On board the floats decorated with stunning floral compositions, charming models as well as extravagantly dressed characters throw out into the public armfuls of flowers: mimosas, gerberas, lilies… 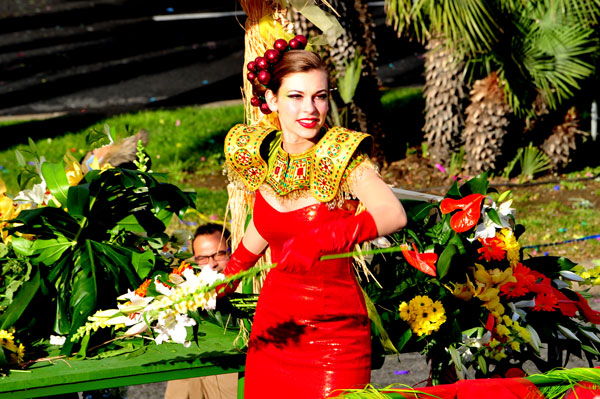 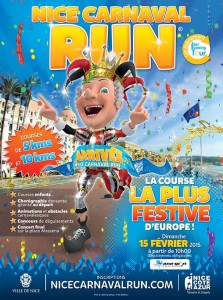 The Nice Carnival will host the first edition of the Nice Carnival Run organized in partnership with Azur Sport Organisation. The entertaining race will be the most festive in Europe as each will have to be disguised to participate. Costumes, music and sports together will provide an explosive fun-packed cocktail on 5 or 10 km.

The floats of the Flower Parades will be completely redesigned, with new structures and different designs under the theme of music.

Lou Queernaval, the first Gay Parade Carnival in France, will take place on the Place Massena, on February 27 with procession of floats, music and confettis. Free admission

A carnival “off”, La Parada Nissarda, a free  100% Niçois open-to-all Carnival, will showcase some floats made by Nice associations and animated by local groups.

As of January 5, 2015, the Nice Carnival App enables immediate access to the program and news. The public can react by posting comments and pictures and share them on social networks as well as receive notification alerts and find sales places and entries through geolocation. 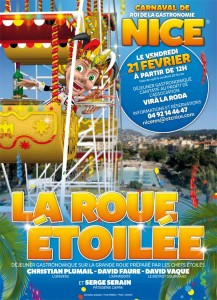 On Friday 21st February at 12:00, a charity gourmet lunch will delight the gourmets in aid of the association «Virà la roda» which supports young people in difficulty and help them find work in the restaurant trade.
The lunch, prepared by Michelin-starred chefs, will served on the big wheel: each carriage contains 4 seats around a central table.
Welcome apéritif served at the base of the wheel, then boarding and service at each passage at ground level. 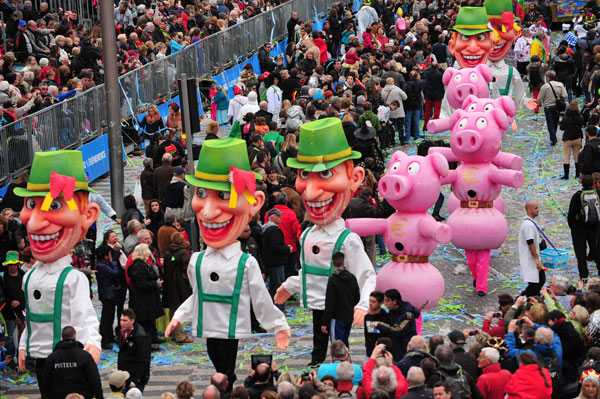 Under the name Culture Ground Korea, the Nice Carnival will receive a major South Korean delegation of 100 people on Saturday, February 14, 2015, on the occasion of the 1st Flower Parade. Some 40 artists  in traditional costumes will march in the parade: 15 musicians and 10 dancers and 15 dancers who perform a modern and caricatured choreography of the global hit Gangnam Style.

The second weekend will host the Carnival Bath and La Zumba that will combine travesty and courage (the sea is generally 13° in February) to the benefit of a charity.

Let the magic work on you in the sun on the French Riviera: Carnival King of Music will show his crowds of fans that he has more than six string to his guitar!