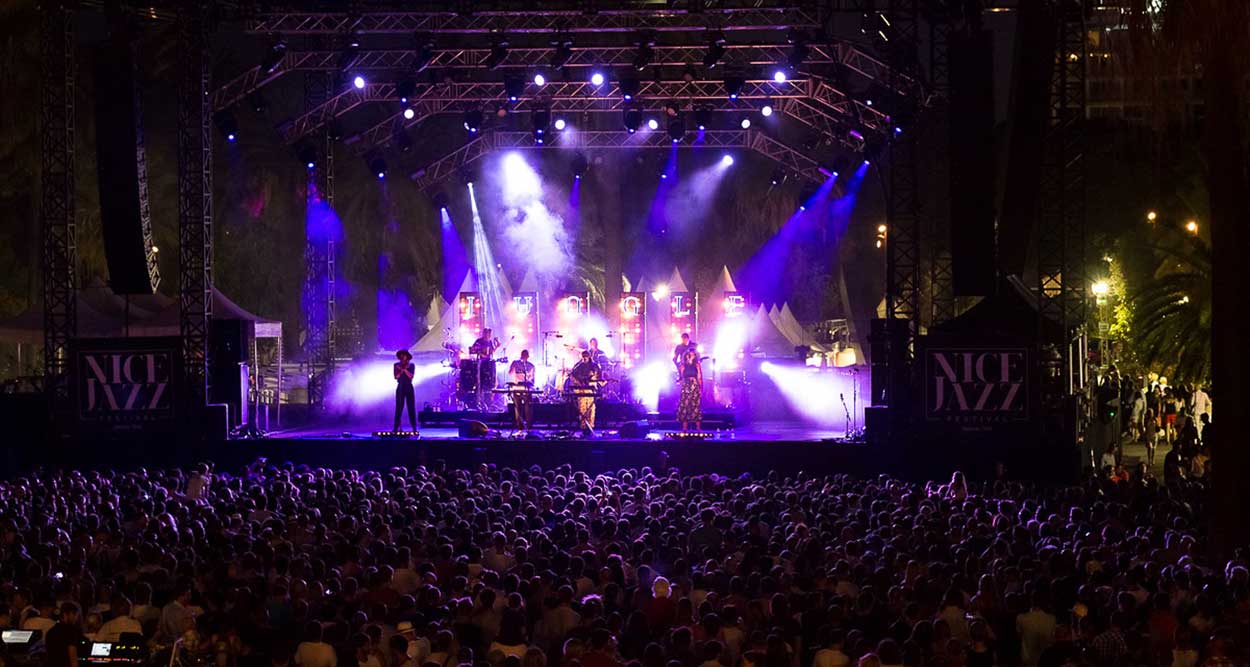 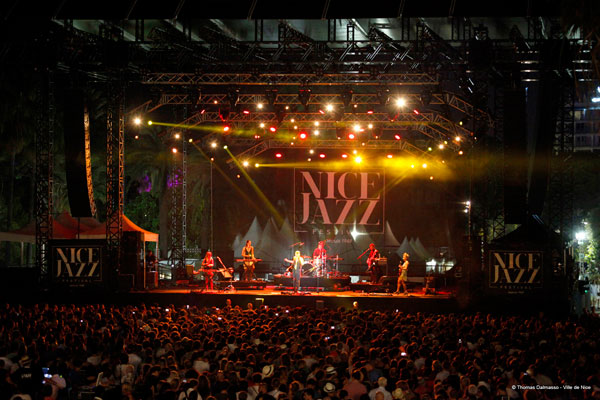 The second night of the Nice Jazz Festival 2015  hosted on July 8, on its two open-air stages, exceptional musicians and the greatest voices of contemporary jazz.

Exceptional programming and memorable evening on July 8 at the Nice Jazz Festival 2015, where a cheering crowd welcomed on the two open-air scenes the show of six artists, exceptional musicians or great voices of contemporary jazz. Again, the Nice Jazz Festival offer to the public who came along en masse, a line-up of exceptional artists such as Indra, Benjamin Clementine, Kenny Barron, the band Jungle, the great Charlie Lloyd and Israeli Asaf Avidan.

The evening began in the Théâtre de Verdure with Indra. On stage, the American singer was accompanied by three musicians: guitar, bass and tenor sax played by her husband Benjamin Traerup, her longstanding accomplice. Indra Rios-Moore‘s clear voice tinged with blues invaded the stands bathed in the setting sun of this hot summer evening. With a repertoire oscillating between groove, soul and blues, she wowed the audience with jazz or pop numbers played extensively before each performed song, like the sublime Pink Floyd‘s Money she wonderfully interpreted. 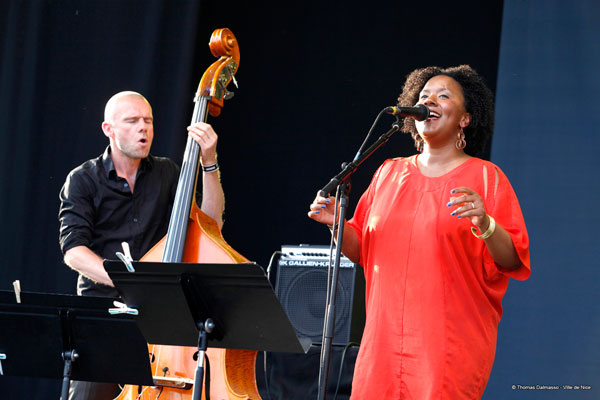 Benjamin Clémentine on the Stage Massena

An emotion in its purest form, a powerful look, a breathtaking virtuoso on guitar and piano, that’s all Benjamin Clémentine, the winner of the 2015 Victoires de la Musique, who is sometimes compared to Nina Simone. The artist had the honor of opening the festivities on the Scene Massena, accompanied by his musicians Barbara Leliepvre on cello, Emmanuel Sauvage on keyboards and Alexis Bossard on drums. Songwriter, pianist and guitarist Benjamin Clementine, the sensitive artist, straight out of the Parisian subway, martyred his piano for one hour and ended the concert with raised arms in front of a magnetized crowd who took time to return to Earth.

Back this time at Théâtre de Verdure with the gifted pianist Kenny Baron. The 70-year artist is now a true legend in the world of jazz. During his long musical career, he accompanied the greatest names such as Dizzy Gillespie, Stan Getz, Chet Baker or Ella Fitzgerald. With Kiyoshi Kitagawa on bass and Jonathan Blake, he displayed his finesse and elegance. He regaled the audience with covers of Charlie Haden such as the very swaying Calypso that made the audience dance, standing in the stands. 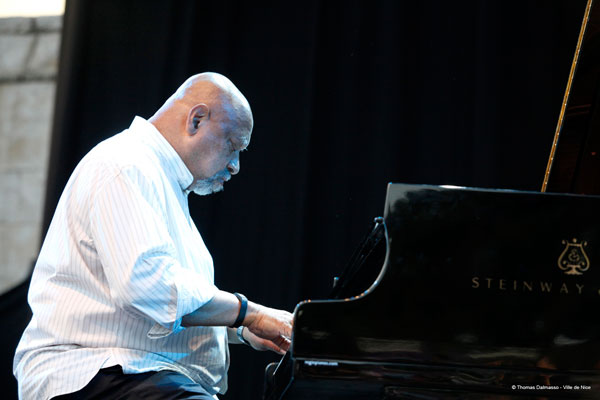 Jungle on the scene Massena

The British duo Jungle performed a rich, lush music. From pop music and irresistibly catchy choruses to soul mixed with disco and funk-electro for this revelation of Pitchwork Festival this autumn, that had come equipped with amazing low bass. The lustful swaying of the public on their interpretation of Busy Earnin’ proved that once again they had won their stripes at the Nice Jazz Festival. 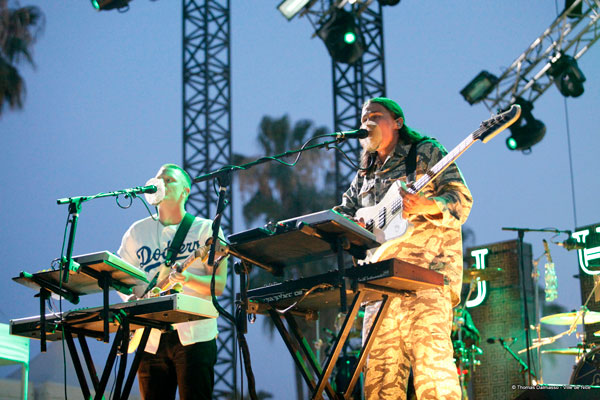 The 78-year old (!) saxophonist displayed all his Jazz genius and found gain his youthful strength like when he was playing with Coltrane or Jerry Garcia from the band Grateful Dead in the sixties. Charlie Lloyd, accompanied by three musicians, pianist Gerald Kleyton, Joe Sanders and Kendrick Scott for the rhythm. The plain playing of the piano, the saxophone and even the flute, the accuracy and beauty of sound, proved once again to the Nice Jazz Festival public that old traditional Jazz was still the best. 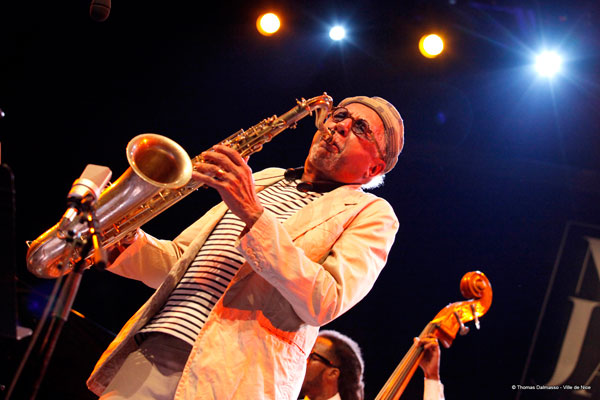 To end up this wonderful evening of the Nice Jazz Festival, the androgynous and heartbreaking voice of Israeli singer Asaf Avidan resounded late into the Riviera night. The rocker with cockerel’s crest hairdo, surrounded by beautiful young women, delivered his last album Gold Shadow and ended with his 2011 hit, The Reckoning Song. Asaf Avidan, often compared to Janis Joplin because of his strong roaring timbre, at the crossroads of music and borders, conquered a public eager for universal language: music. 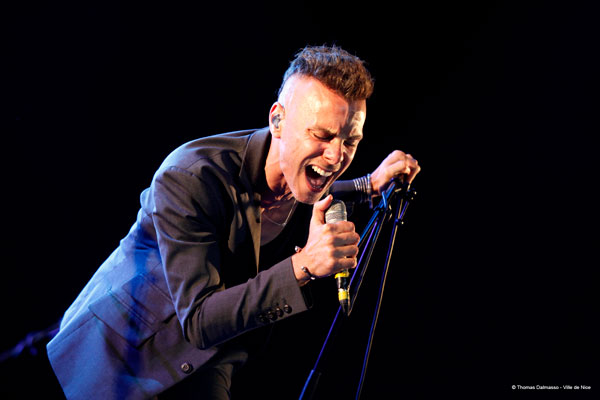