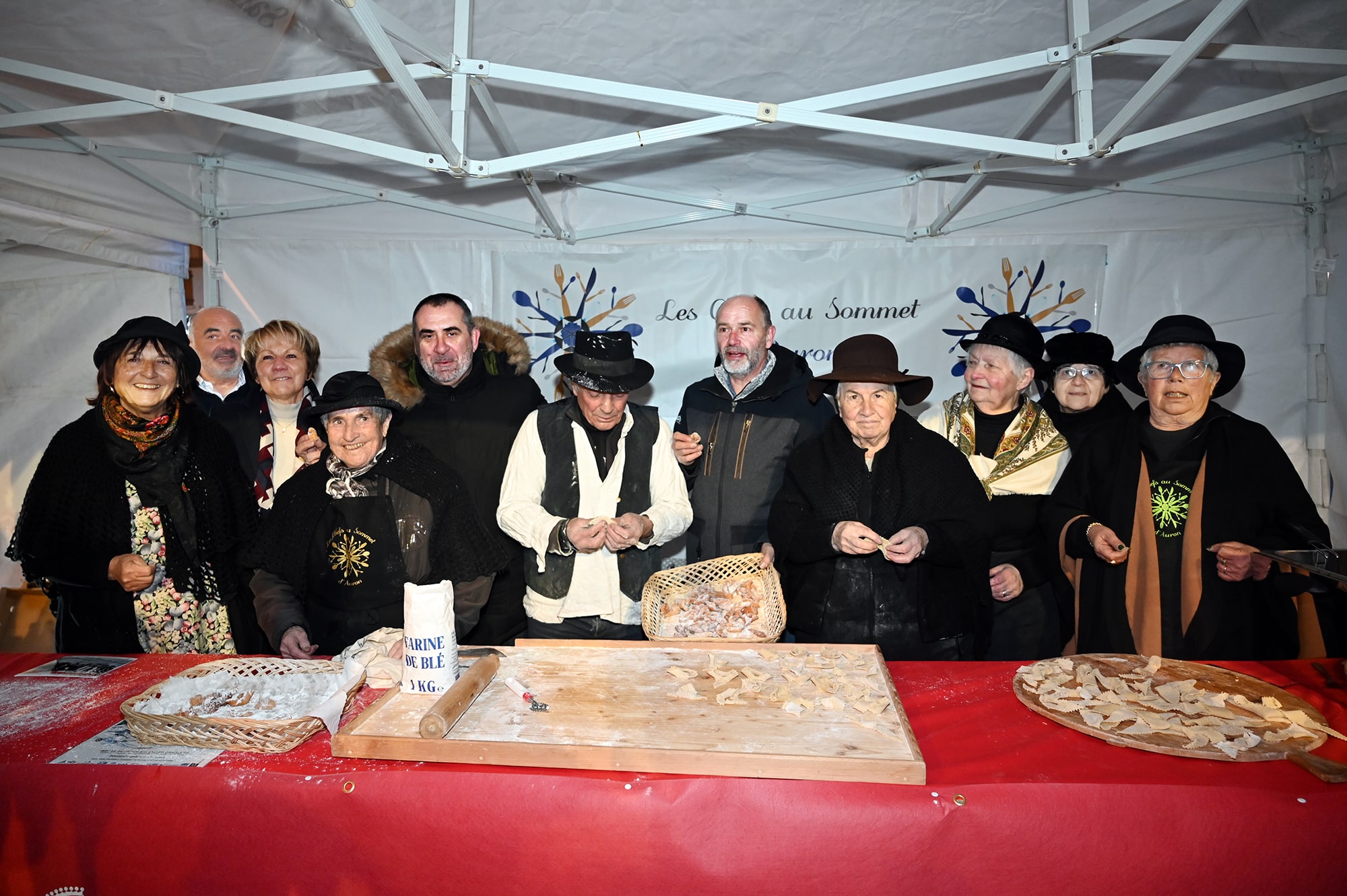 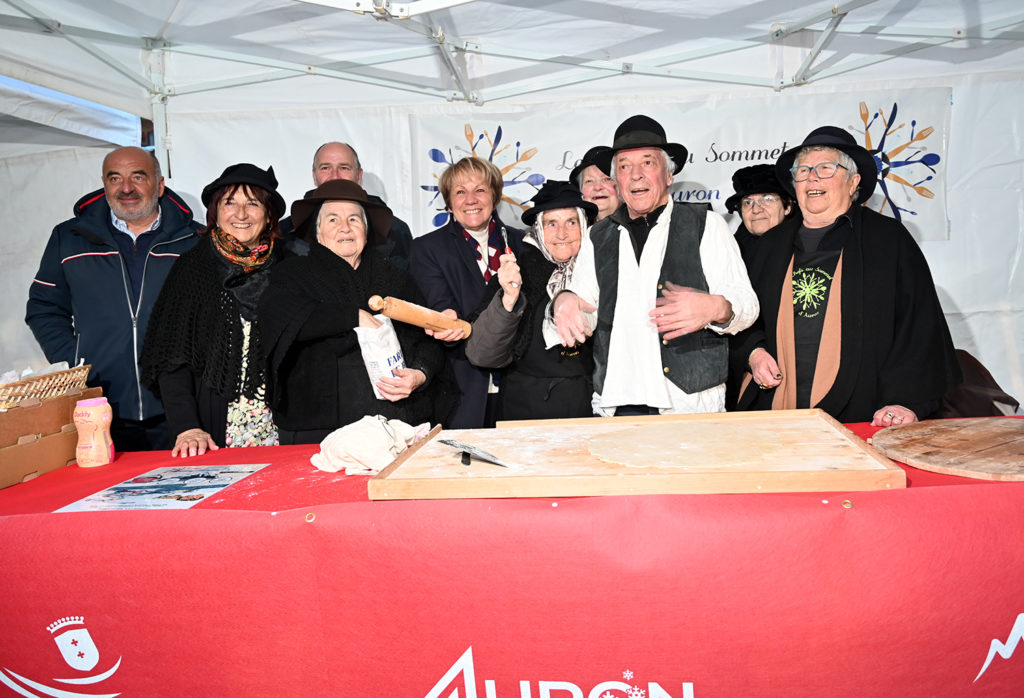 The Chefs au Sommet d’Auron – eleventh edition – turn the emblematic ski resort of the Mercantour into the Capital of Mountain Gastronomy from 14 to 19 January 2023, with chef Patrick Raingeard as godfather. 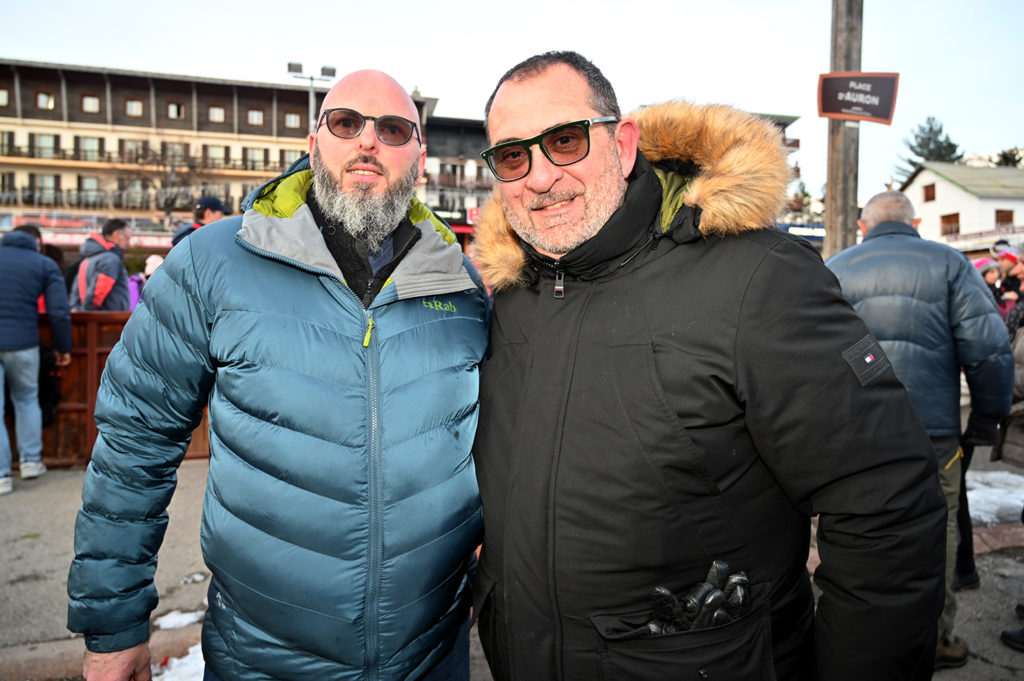 Chefs au Sommet d’Auron 2023: the Mountain Gastronomy Festival was inaugurated on Saturday 18th January in the presence of the godfather of the 11th edition, Patrick Raingeard, starred chef of La Table de Patrick Raingeard at Cap Estel in Eze. Hot chocolate, spreads, brioches, and ganses stéphanoises were on the menu of a big inauguration snack, in the presence of Colette Fabron, mayor of Saint Étienne de Tinée – Auron. Victor Delpierre, World Barista/Cocktail Champion, introduced young “mixologists” to fruit cocktails, before making the Riounet, his creation which has become the official drink of the resort. Later, students from the Lycée Jeanne et Paul Augier in Nice completed this tasty and festive display, placed under the sign of conviviality and friendship. 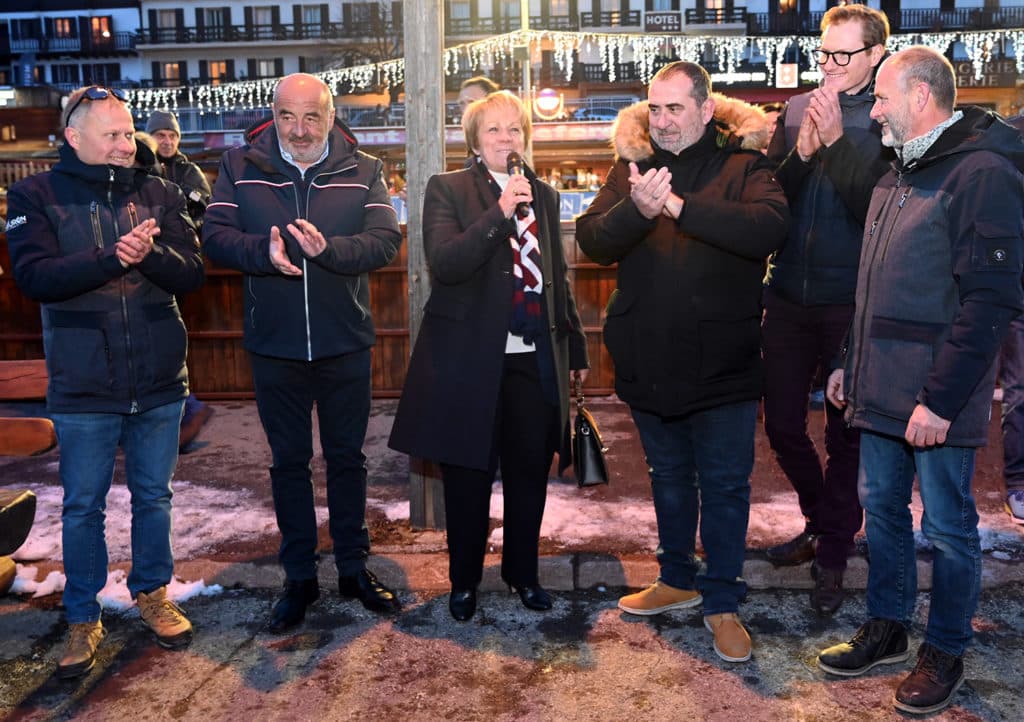 For a week, under the honorary presidency of Patrick Raingeard, Les Chefs au Sommet d’Auron will be deploying their talents in the restaurants of the Mercantour resort and the Tinée Valley that are partners in the culinary event. At the Salle Rovery, the chefs will host gourmand happy hours and cooking shows, revealing their secrets to an attentive audience of gourmets before having them taste their creations. The virtuosos of the piano put forward organic and Locavore products to honour the gastronomic richness and quality products of which the mountains and valleys of the Haut Pays abound. 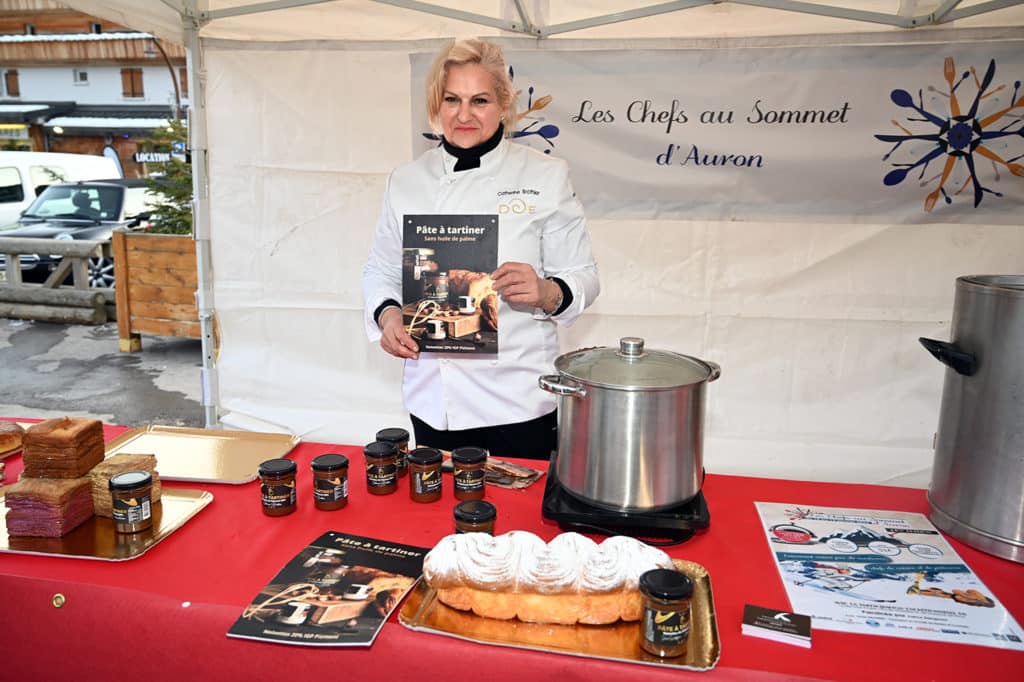 Rigorous and passionate, Patrick Raingeard is the chef of the restaurant La Table de Patrick Raingeard at the five-star Cap Estel hotel, a unique place of hospitality in Eze. Patrick Raingeard was awarded a Michelin star in 2013 – the only one awarded by the prestigious red guide in the Maritime Alps that year! – and has kept it ever since. An award confirmed by Patrick’s crowning as Gault&Millau d’Or PACA 2013 and the award of 3 toques and Coup de Cœur at Gault&Millau. A Breton who fell in love with the Mediterranean, Patrick Raingeard trained in great houses such as Lenotre and Ladurée in Paris or La Mère Poulard in Mont Saint-Michel, alongside Alain Passard, Jacques Maximin and Patrice Hardy. 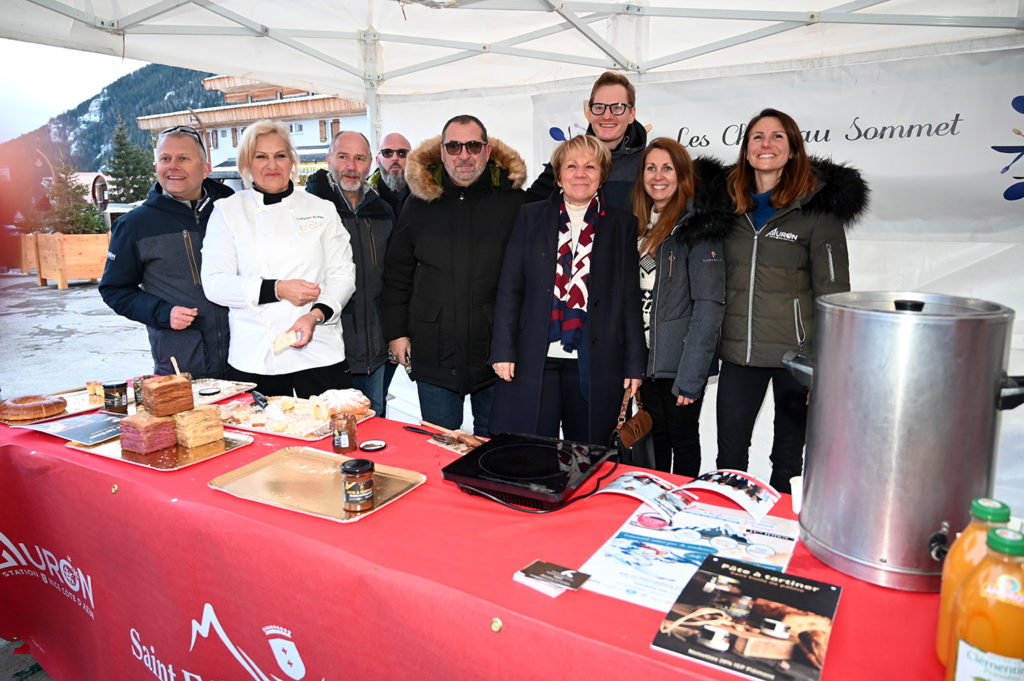 A high-altitude culinary event in the spectacular snow-covered peaks of the Mercantour in the Southern Alps, Les Chefs au Sommet d’Auron celebrates mountain gastronomy from Saturday to Thursday with the greatest chefs from the coast. The restaurants of the resort of Auron, Saint-Damas-le-Selvage and Saint-Étienne de Tinée welcome in their kitchens renowned chefs and pastry chefs from the region. Every evening, three different chef/pastry chef duos officiate in three different restaurants and create an exceptional dinner. In a warm and authentic atmosphere, holidaymakers, seasonal workers and inhabitants of the valley have the opportunity to enjoy sumptuous gastronomic menus at the special price of 55 euros. With an amuse-bouche, a starter, a main course and a dessert, the menus are sure to delight the gourmets’ taste buds. 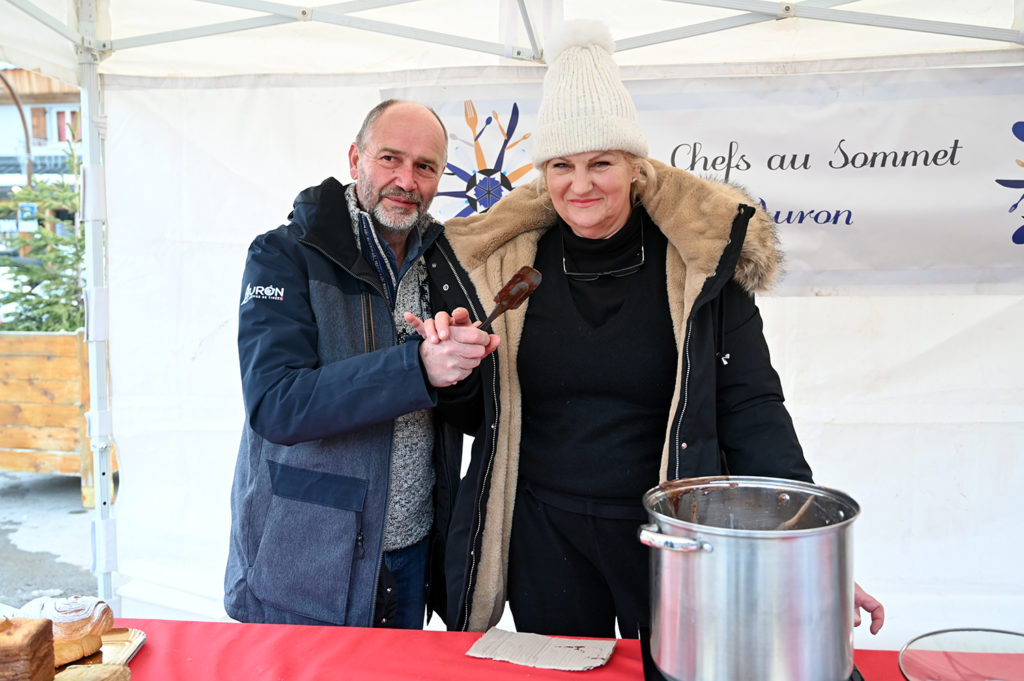 Inauguration with a gourmet snack

The profession of chef or pastry chef is a profession of love, passion and sharing. The generous actors of the opening of the Festival demonstrated this during the inauguration of the Chefs au Sommet d’Auron on the central square in the presence of the sponsor Patrick Raingeard accompanied by Stéphane Mangin, pastry chef at three-star Frères Troigros in Vonnas. As a gourmande mise en bouche for the festival, Catherine Brothier, Zk Chocolatier, poured milk over her delicious Piedmont hazelnut spread to make a tasty hot chocolate and spread it on brioches for the delight of an enchanted audience of young and old. 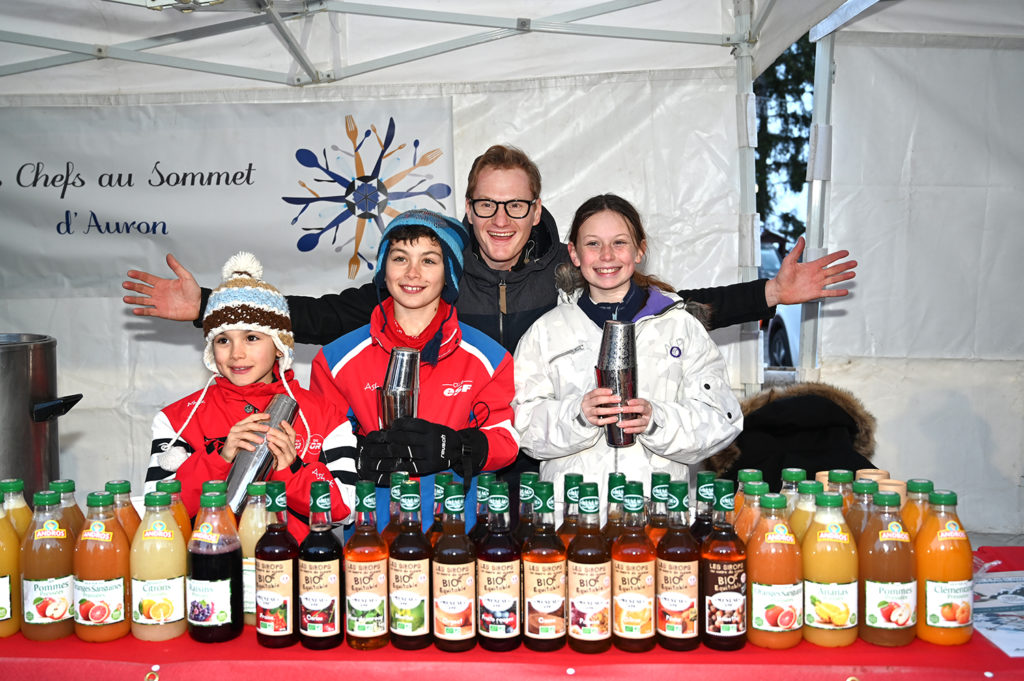 Victor Delpierre, World Barista/Cocktail Champion, introduced the children to mixing flavours to create a fruit juice-based drink, with shaker mixing. To the great delight of the skiers and tourists who love high mountains and good food who came to the inauguration, the lady cooks from Saint-Etienne de Tinée made delicious crunchy and melting ganses and Stéphanie Aufrère, creator of rose flavours at the Comptoir de la Rose in Grase, introduced them to her Centifolia rose rum. 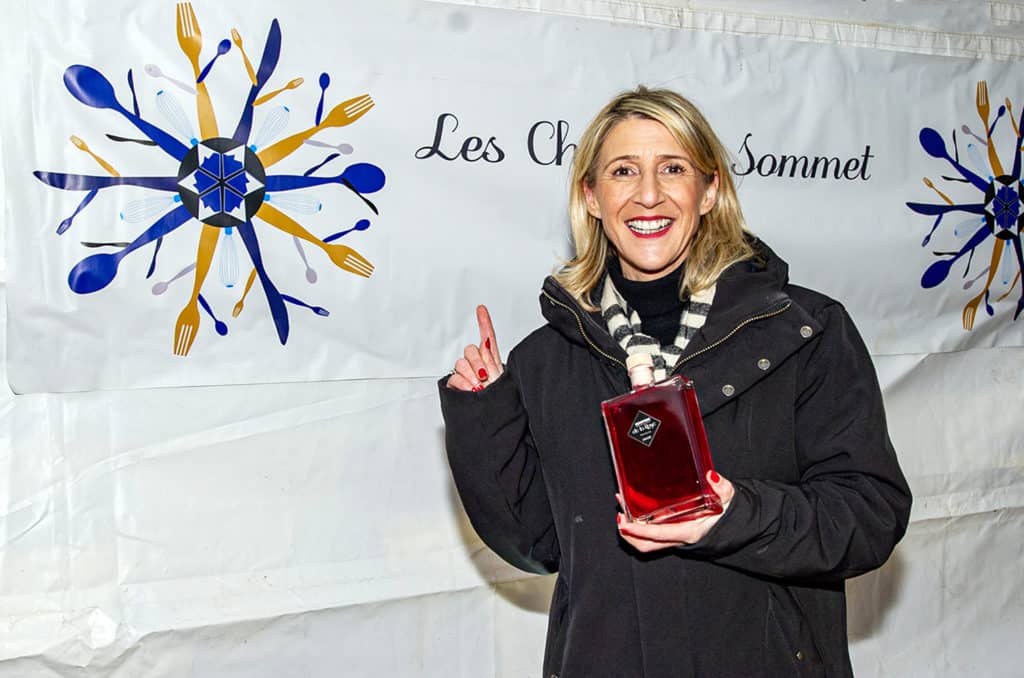 The Riounet: one cocktail, three worlds

The warm afternoon ended on the invigorating notes of the tasty Riounet, the cocktail of the talented and endearing Victor Delpierre, who imagined this creation during the Chefs au Sommet d’Auron 2018, which has become the official drink of the resort. This harmonious beverage of the summits can be sipped cold after a beautiful summer walk in the mountains, or enjoyed as a toddy or mulled wine after a day on the snowy slopes, or after skiing to comfort yourself. This same cocktail, topped up to 50% with a bubble, Champagne, Crémant or Prosecco, becomes a great aperitif cocktail that will accompany your most beautiful festive moments. The Riounet is composed of Triple Sec, created in 1834 by Jean-Bapiste Combier, chocolate maker and confectioner, in stills set up by Gustave Eiffel, still in use today, Chocolate Distillation, Cocoa Cream, to be mixed with Lemon and Orange Juice. 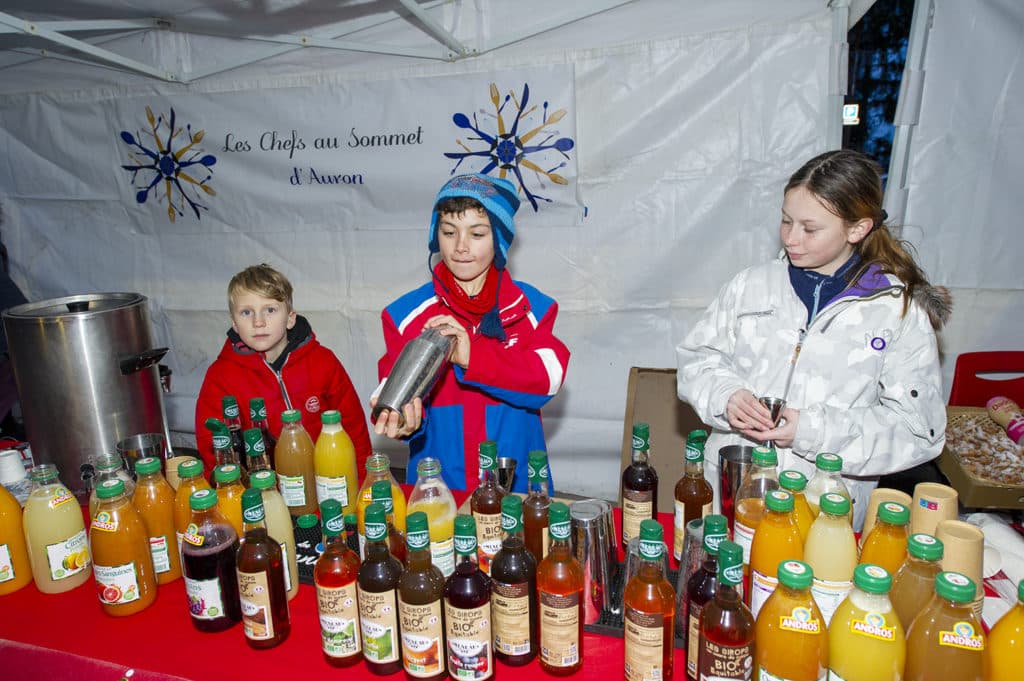 The week of the chefs’ generosity and sharing began with a symphony of refined dishes supervised by Patrick Raingeard. For the second year, the recipes were implemented and served by the students from the Lycée Jeanne et Paul Augier, the Hotel and Tourism School of Nice, under the aegis of their headmaster, Denis Férault, and a teaching team. About fifty gastronomy students and their teachers worked in the kitchen and dining room to create an exceptional gastronomic dinner where open space stoves and animations made the Ballade en sous-bois dinner unforgettable. 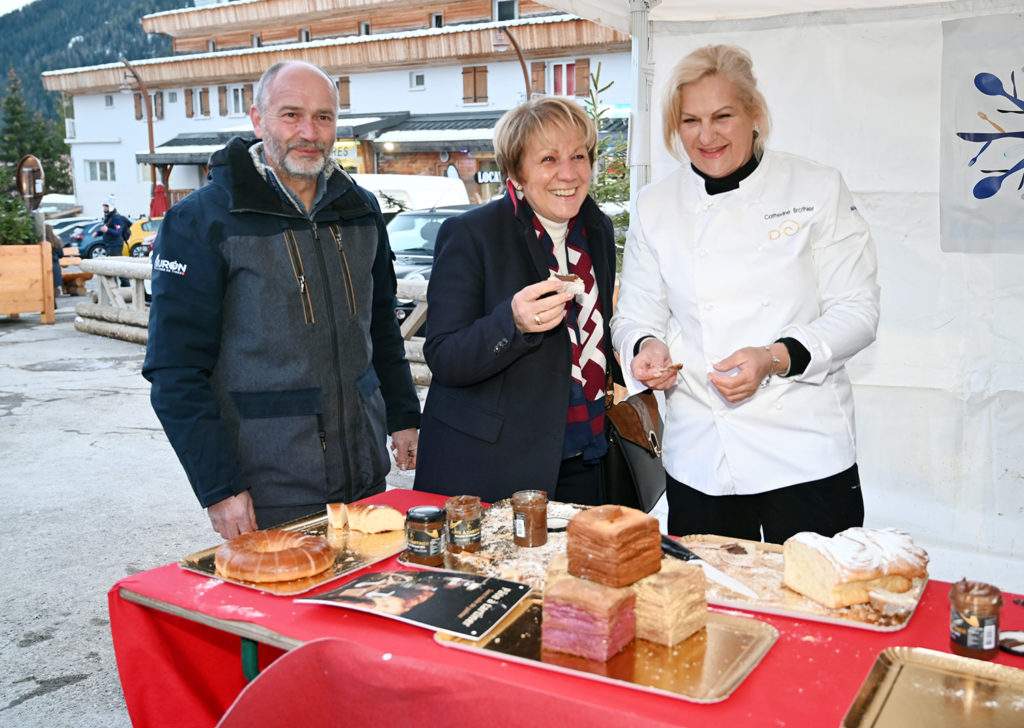 Gourmet after ski, workshops and conferences

In addition to the four-handed dinners – a chef and a pastry chef – every evening, the Chefs au Sommet d’Auron will be offering a rich programme of gourmet after-ski activities, workshops and conferences every day from 14 to 19 January 2023. From 4pm onwards at the Salle Rovery, numerous activities await the locals and tourists who love gastronomy: savoury/sweet workshops for young and old, conferences, culinary demonstrations with the Chefs, signing sessions… While the parents are cooking in the workshops, their little devils can, depending on their mood, play at being apprentice cooks like mum and dad by making one of their favourite dishes or attend culinary demonstrations and playful workshops in the “P’tits Chefs” workshops. 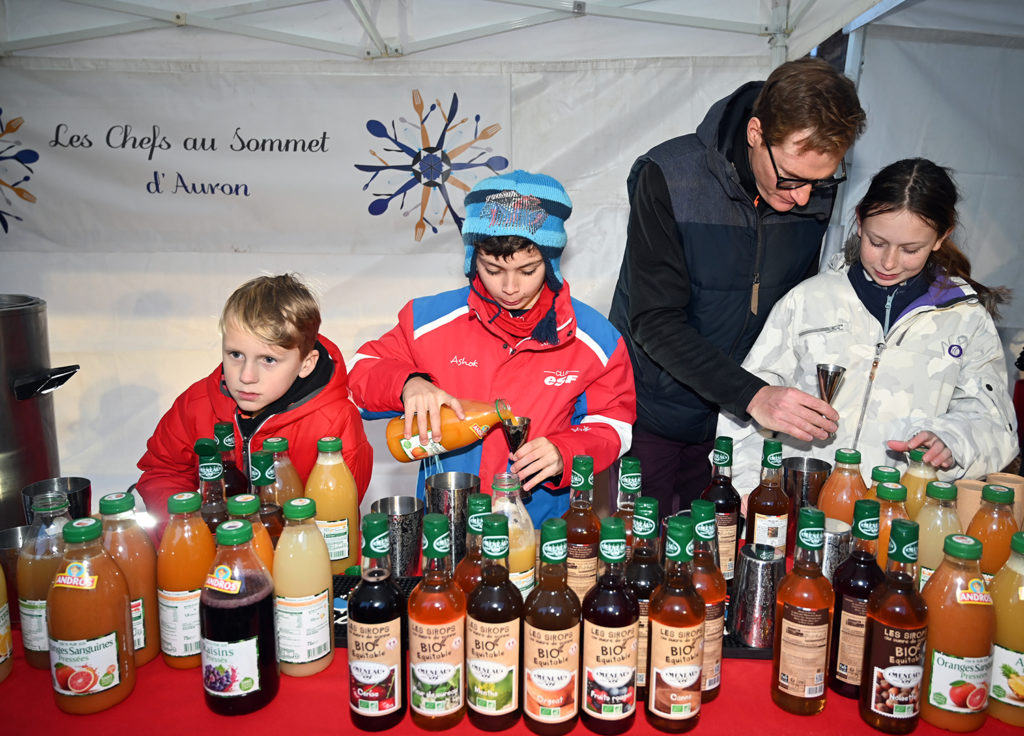 Relaxation and a touch of madness

The Chefs au Sommet d’Auron invite you to six days of gourmet festivities to be enjoyed without moderation, around an explosive recipe based on the flavours of our mountains, snow, sun, relaxation, plus a touch of madness and good humour for a real cure of flavours and well-being at the summit of the Mediterranean Alps. 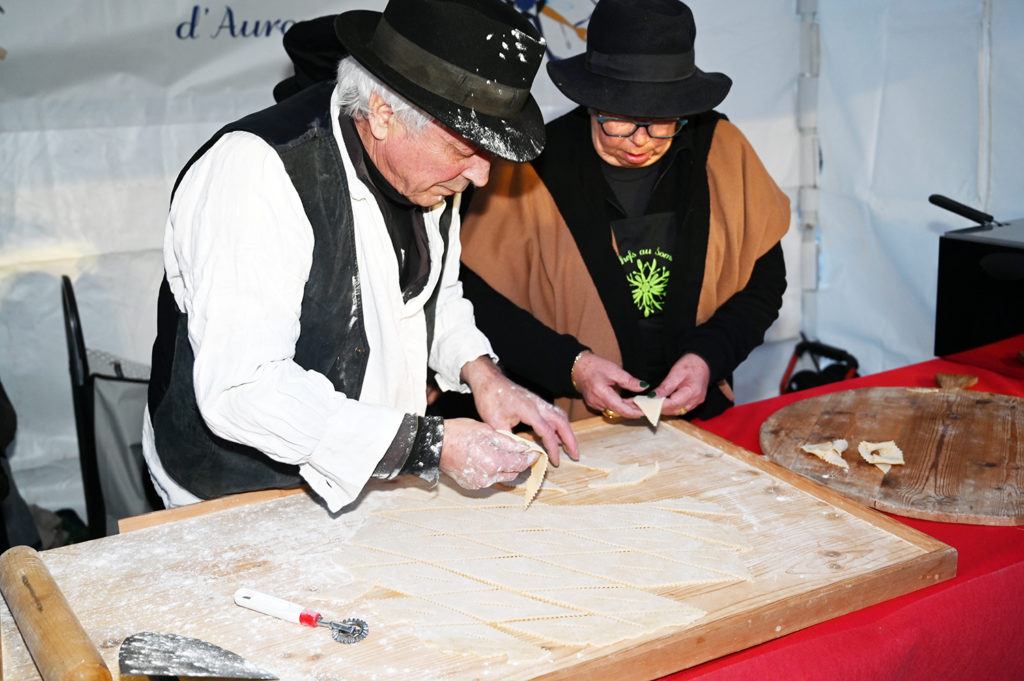 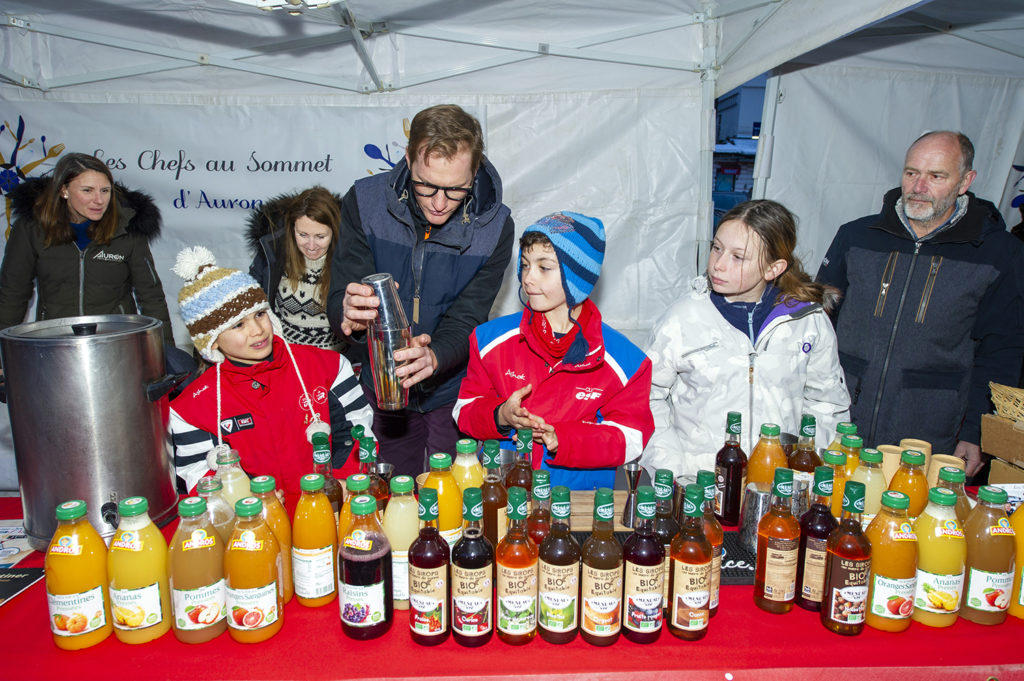 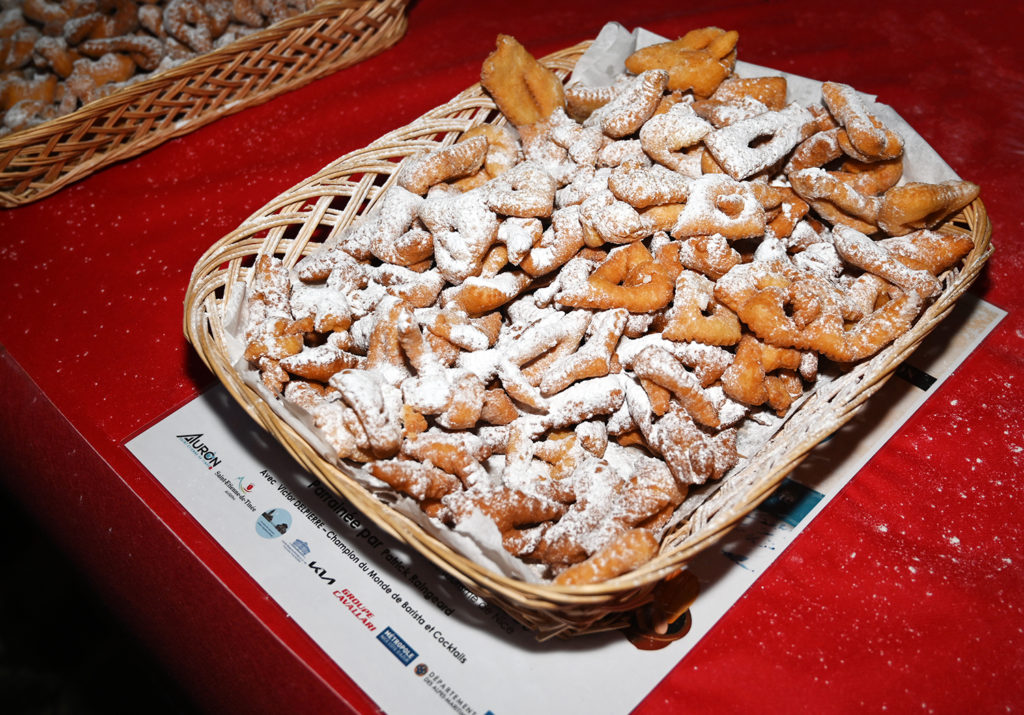