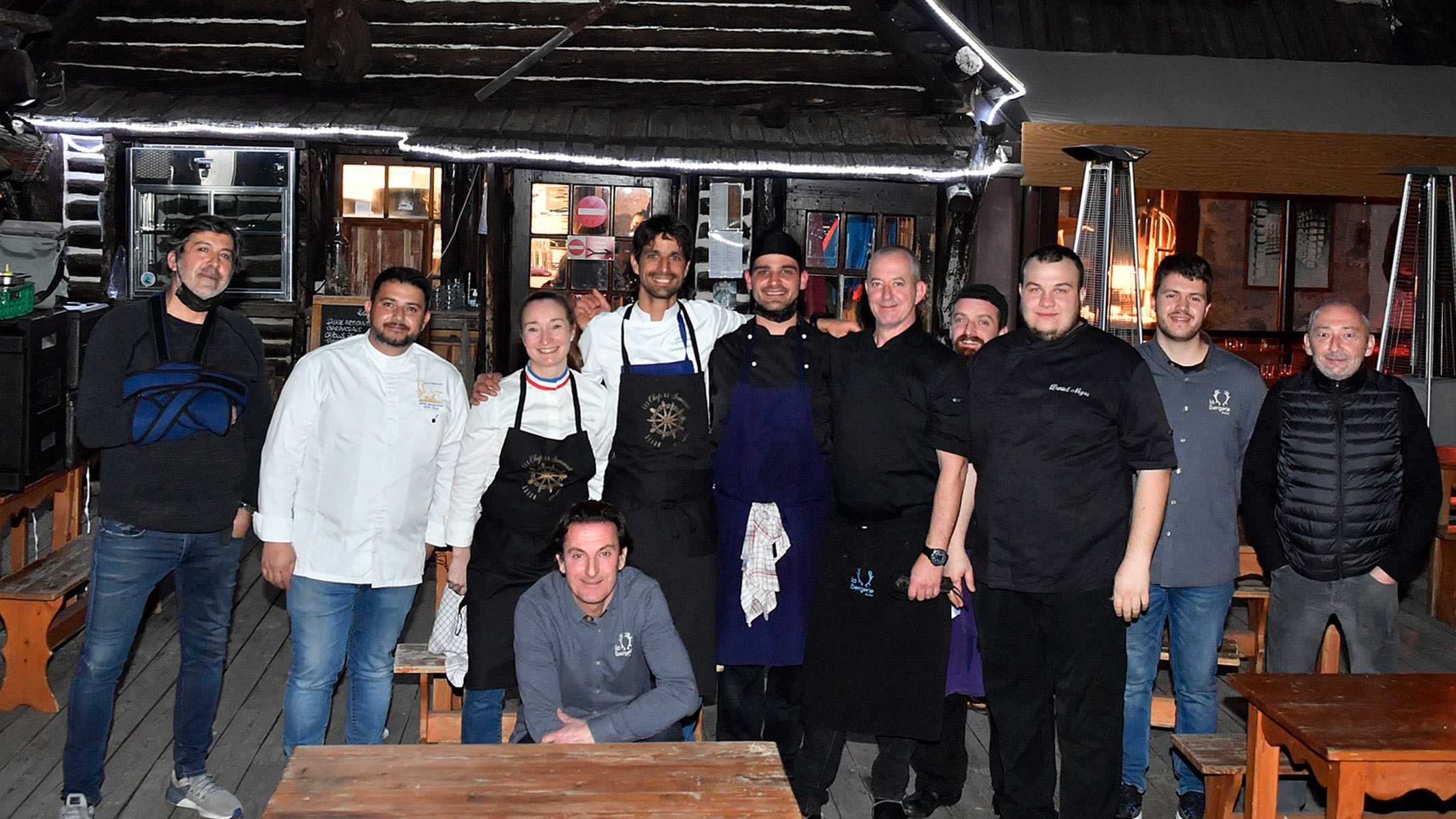 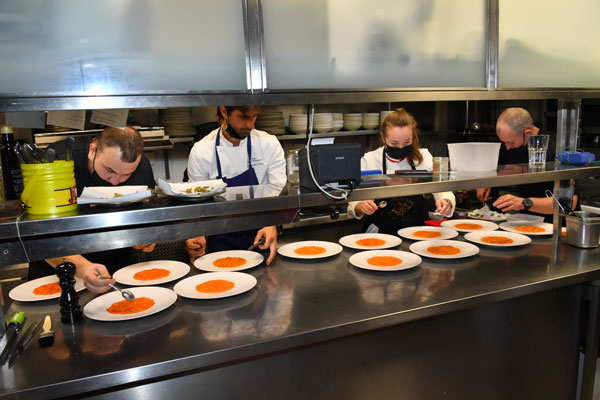 Les Chefs au Sommet d’Auron: from 15 to 20 January 2022, the 10th edition of the Mountain Gastronomy Festival offers memorable gastronomic experiences to tourists and locals. In addition to the cooking shows, every evening, renowned chefs officiate in the restaurants of the Haute Tinée resort and offer sumptuous gastronomic dinners at the unique and privileged price of 55€ per person. Chef Christophe Billau from L’Auberge Quintessence in Roubion and Pastry Chef Steve Moracchini from La Passagère restaurant at Les Belles Rives hotel in Juan-Les-Pins have delighted the taste buds of fine gourmets at restaurant La Bergerie in Auron. 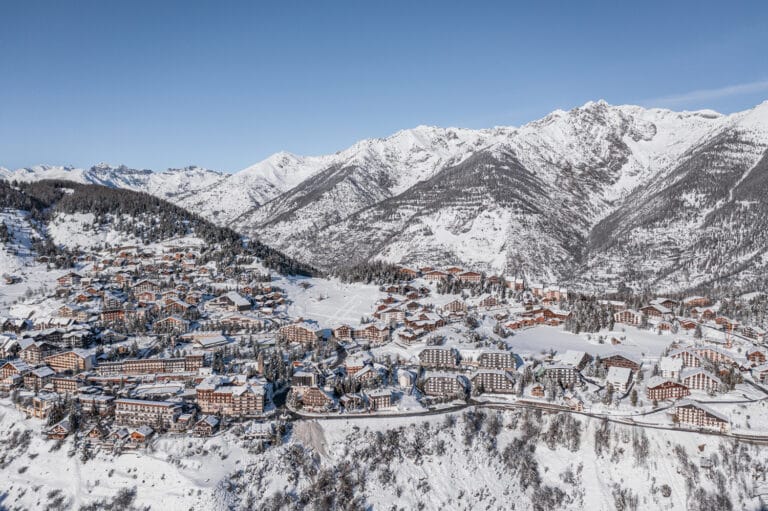 The Mountain Gastronomy Festival is celebrating its tenth anniversary. Once again this year, this flagship event brings together many of the Côte d’Azur’s top chefs and talented pastry chefs to share an authentic moment of culinary pleasure and conviviality in the heart of the sumptuous Mercantour mountains. Concocted by the chefs in ephemeral kitchens, the menus composed of an amuse-bouche, a starter, a main course and a dessert thrill the taste buds of fine gourmets every evening. 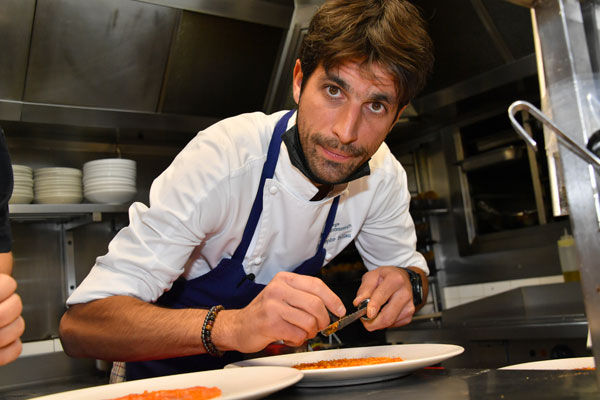 On Monday 17 January 2022, piano virtuoso Christophe Billau from Auberge Quintessence in Roubion and pastry chef Steve Moracchini from La Passagère restaurant at Belles Rives hotel in Juan-Les-Pins transposed their delicious culinary experiences to the warm, wooded, mountain chalet setting of the La Bergerie restaurant at the foot of the slopes. 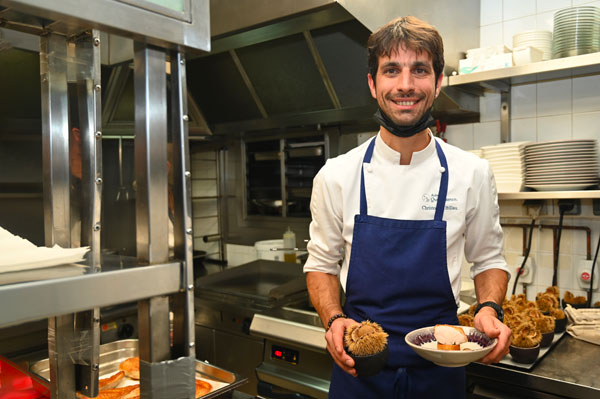 Culinary philosophy at the foot of the slopes

Christophe Billau’s culinary philosophy is as clear as the pure mountain air: “Every day is a new challenge and respect for the customer means respect for the product! These are the major virtues carried by two passionate restaurateurs, Pauline and Christophe Billau, who opened the Auberge Quintessence in 2017, a hotel-restaurant in a wilderness setting amidst the magnificent landscapes of the Alpine mountains. In this former refuge built in 1962 by a local shepherd, Christophe and Pauline are committed to maintaining the “l’esprit auberge” in simplicity and authenticity, while offering contemporary comfort. 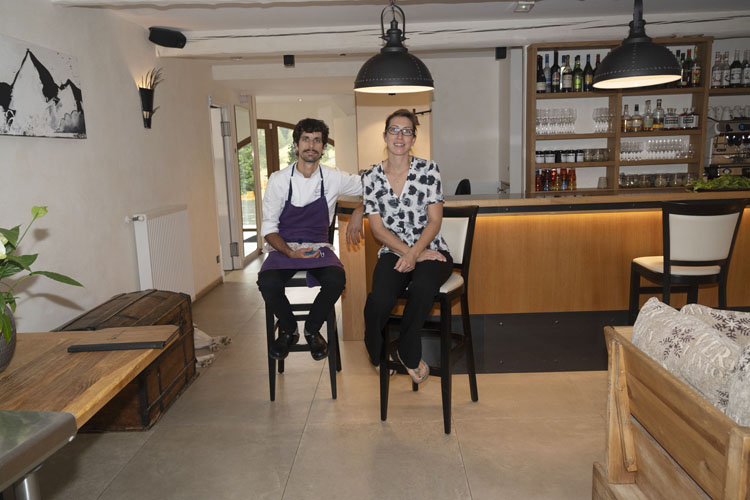 For Christophe Billau, each producer or supplier is a true partner with whom he shares the love of good produce and the sense of sharing. In the wilderness, the chef himself collects the herbs and flowers that will be used in his current mountain-inspired cuisine. His solid technique allows him to exalt the beautiful perfumes of the products he sublimates, such as the trout of Cians en Gravelax marinated in juniper from our mountains, bottarga and citrus fruits from the Domaine de Jasson or the naked neck poultry with blue legs from Eric in Pierlas, the supreme lightly smoked and roasted, the leg confit in the “pastilla” style, chestnuts from Isola with foie gras, juice with caraway from our alpine meadows. The products that made up the dishes were brilliantly magnified by the aromatic flavours of the herbs and flowers from the high country pastures. 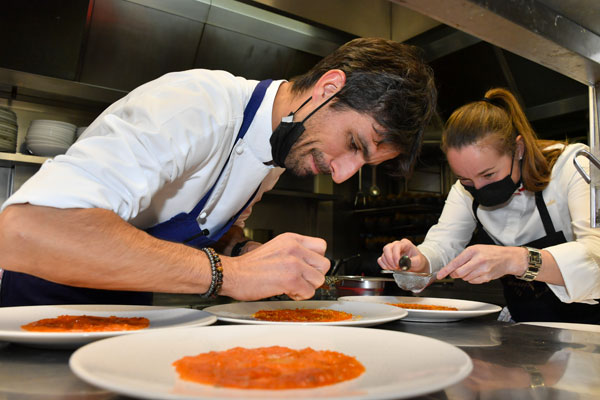 A career among the stars

Christophe Billau trained with talented chefs such as the MOF (Meilleur Ouvrier de France) Franck Ferigutti at the Chapon Fin in Bordeaux, then at the Mandarin Oriental in Geneva. He then joined Philippe Chevrier‘s brigade at the Domaine de Châteauvieux in Satigny. In the USA, he was sous-chef at L‘Ortolan in Los Angeles. At the age of 26, he was appointed executive chef at the Moulin de l’Abbaye in Brantôme, before taking over the communal inn Lo Robur in Roure in 2009. In this idyllic place between sea and mountains, in the heart of the Mercantour Park, he was consecrated in 2014 by his first star. After eight years at Lo Robur, Pauline and Christophe opened the Auberge Quintessence in 2017, after four months of renovation work. The star of the high country shines again with a Michelin star in 2019. 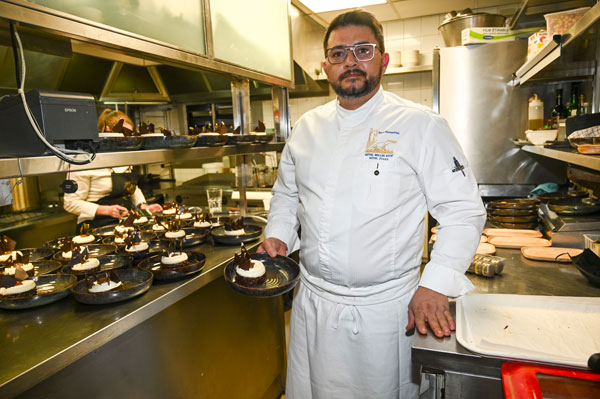 Product flavour and excellence of taste

A true pastry prodigy, Steve Moracchini offers his generous and daring creations on the menu of the gastronomic restaurant La Passagère at the Hotel Les Belles Rives, run by the starred Chef Aurélien Véquaud. His pastry credo is to highlight the flavour of the product and the excellence of the taste. His pastry desserts are inventive and light on sugar. 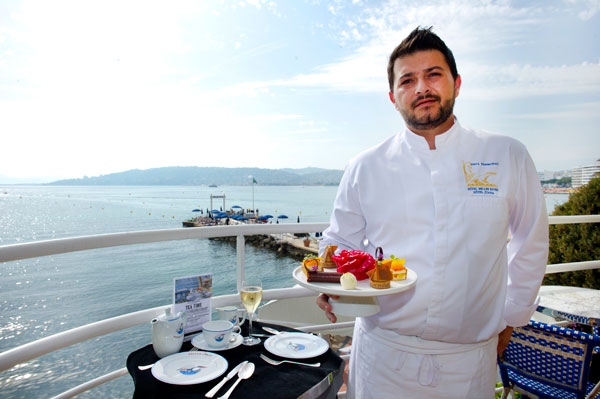 In charge of desserts and pastries for the Belles Rives Group since January 2012, Steve Moracchini supervises the dessert menu at La Passagère and the Bistrot Terrasse at the Juana Hotel in Juan Les Pins. After several years spent in pastry shops and boutiques, he joined the Partouche Group and the 3.14 Hotel. He then became Pastry Chef for the group of restaurants Le Baoli and Le Baoli Beach in Cannes. He then flew to Florida and joined the kitchens of Le Vita in Miami before returning to the Côte d’Azur. Steve Moracchini is a member of the APRECA association (Association des Pâtissiers de Restaurants Côte d’Azur). In October 2015, he was elected Pastry Chef of the Year in the Gault&Millau 2016 awards. This well-deserved distinction now places him among the greatest. 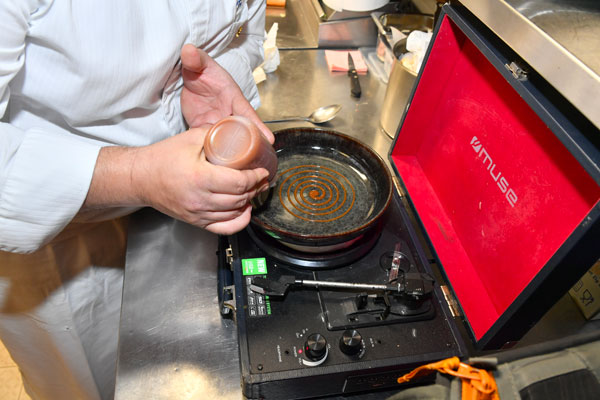 A pick-up recycled by the chef!

A daring, refined and gourmande pastry

Steve Moracchini is a young, daring, talented and generous chef whose gourmet world is a pleasure to discover as you taste his delicious creations. Innovative and in love with products, Steve Moracchini seeks to sublimate the selected products in a daring, refined and gourmet pastry like the Arabica creaminess and whisky cream, walnut biscuit with candied chestnut slivers which delighted the taste buds of the fine gourmets at La Bergerie d’Auron. 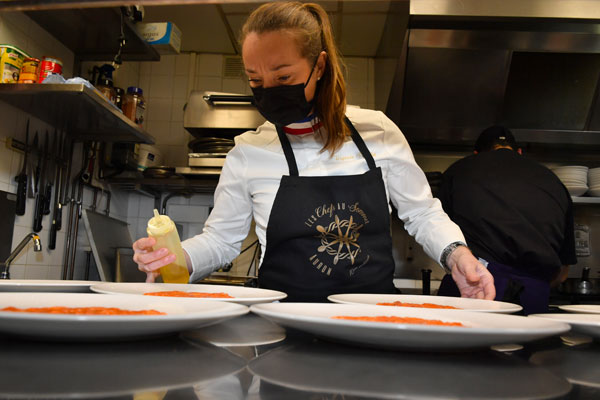 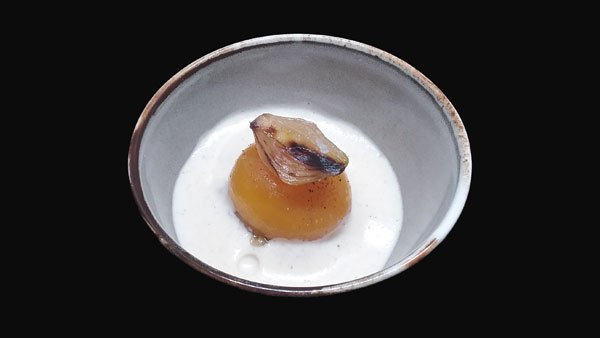 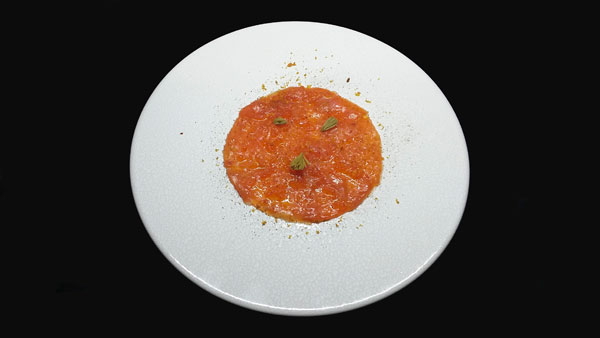 Trout from the Cians en Gravelax marinated in juniper from our mountains, bottarga and citrus fruits from Domaine de Jasson. 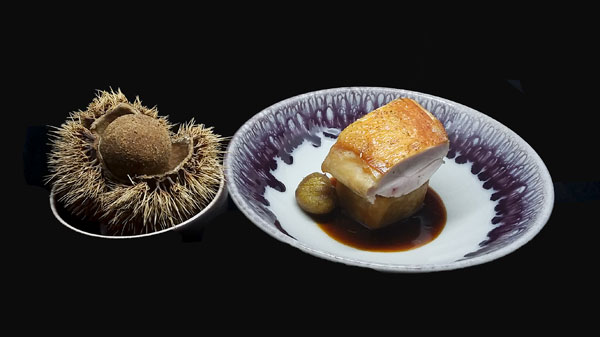 Naked-cneck poultry with blue legs from Eric in Pierlas, the supreme lightly smoked and roasted, the leg confit in a “pastilla” style, Chestnuts from Isola with foie gras, caraway juice from our mountain pastures. 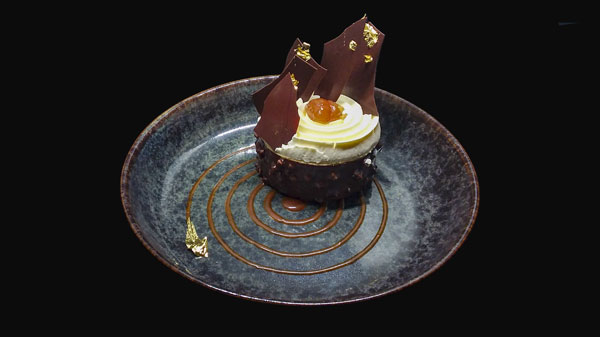 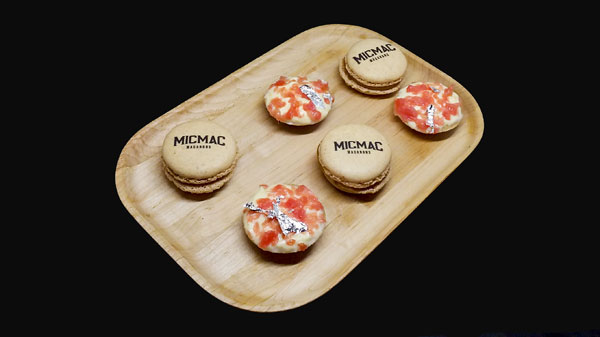 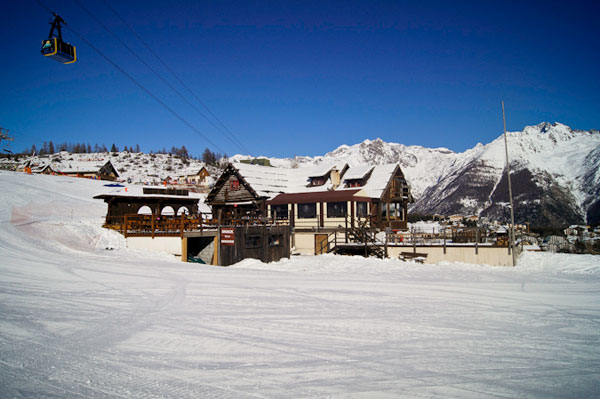 La Bergerie, the oldest restaurant in the resort

At the foot of the slopes of the very popular resort of Auron, in the heart of the Mercantour mountains, La Bergerie opens its terrace onto the slopes, which is very pleasant in winter when the sun comes out for lunch. It is the oldest restaurant in the resort, a real sheepfold transformed into a restaurant. Chef Alain Monge offers 100% home-made cuisine, from fresh pasta to roasted meats or specialities from Nice. The wine list features many nectars from Provence. 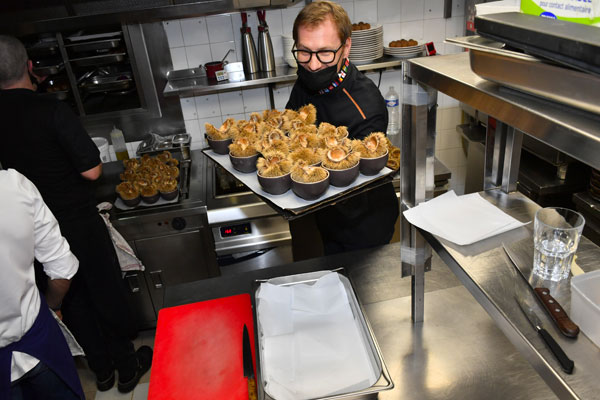 Victor Delpierre, World Champion Barista/cocktail help as well to the success of the dinner. 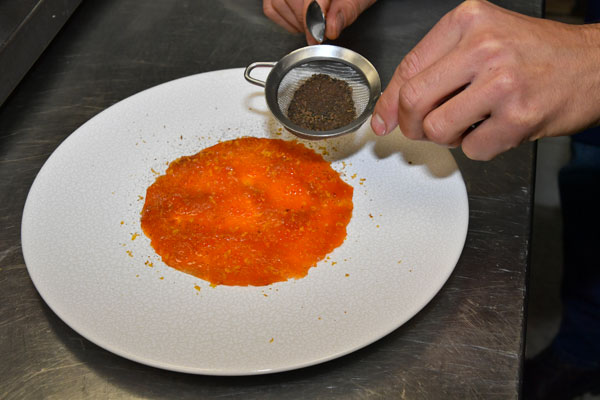 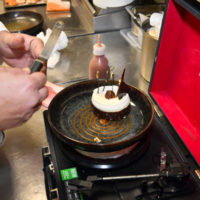 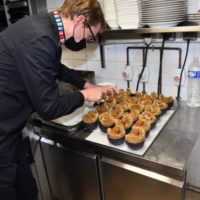 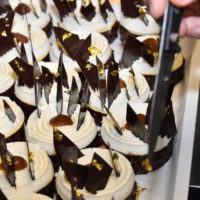